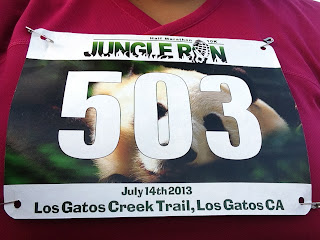 I've spent the better part of the past week waylaid by headaches and nausea that I got after attempting to go back to CrossFit after almost 2 months off. (The headaches and nausea still haven't gone away, btw. I hope it's not serious.) This definitely complicated things for me on Sunday when I went to the Jungle Run.

By all accounts, I probably shouldn't have even gone, but I'm stubborn, and plus, with two full marathons to train for, it's gotten really hard for me to find other races that fit my schedule. So off I went with my friend Sonia in search of half marathon #11 on the year.

The weather was fine, the course was familiar (I ran this one last year), and it would have been smooth sailing, if it weren't for my health. The huge, HUGE hill at the beginning of the course was much MORE huge than I remembered, and for the first couple of miles, the constant up-down of hills large and small made my calves and shins tighten up. I sent Sonia on ahead without me as I took some extra time to walk through the tightness and the headache that was building.

The headache subsided a bit and my legs felt better eventually. I managed to squeeze out a few good run intervals before I felt a familiar and UNWELCOME cramp in my abdomen after mile 3. And, as I was already familiar with the course, I was pretty sure that there would be no bathroom until we entered the park. Which was not for a couple of miles :( At first I tried the "If I run, I'll get there faster" approach, but that only works for so long before running makes things worse. I seriously considered darting into one of the commercial buildings along the street we were running on, but it was Sunday, and none of them looked open. And I REALLY did not want to squat in the bushes. Thu is NOT a squat-in-the-bushes kind of girl. Plus, we were in a commercial district, not the wild. Someone was going to come here to work the next morning... I just can't DO that.

When I finally entered the park area, I wanted to CRY, I was so happy to see the bathroom. After that, feeling totally fine and ready to run, I blasted through miles 6-9 before my head started hurting again. This part of the course was on my home trail that I always do my Sunday runs on (that's why I signed up for this race), so it felt comfortable and familiar, like a favorite sweatshirt.

The last three miles go onto a dirt portion of the trail that I never run on. It's an out-and-back, and I remember it feeling interminable - like, where the HELL is the turnaround?? It was much the same this year. Only, I realized why that was on the way back. I could barely get myself to run on the way out, but I found I was able to blitz my way back because it was downhill. The incline on the way out, for me anyway, was gentle enough for me not to realize it was an incline, but difficult enough to destroy my spirit entirely :) The decline coming back (coupled with a gentle, refreshing breeze) was the second wind I needed to finish the race.

This year, the end of the course looped around the track at LGHS (which it did NOT do last year), so my promise to myself to run to the finish line came back to bite me in the ass, as I had to run a little more than I thought (and with spectators/other runners milling about, I felt like I couldn't stop), but it was done and over. 3:07:56. Considering how I was feeling for most of the race, finishing at ALL was great. I'll take it.

Next up: THE SANTA ROSA MARATHON at the end of August. All systems go. 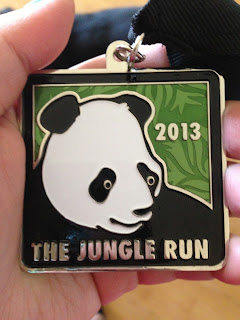 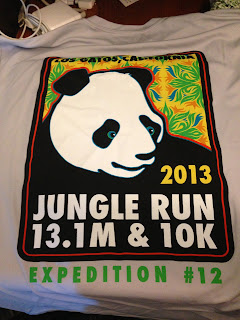