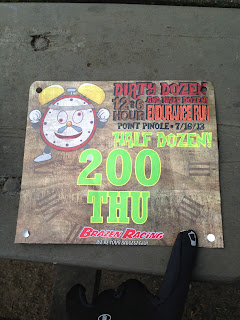 Saturday was Brazen's annual endurance run, the Dirty Dozen. I did this one last year as my first Brazen race ever, and since then, my love for this company has only grown.

I have been pretty non-active lately since the end of the school year, so I didn't have particularly lofty goals - my training schedule (oh yeah! I've got a marathon coming up!) specified 16 miles, so that was my plan, and 6 hours is well more than enough time for me to cover that, even walking.

The loop went a lot faster than I remembered, and definitely not because I was moving faster :) (Because I wasn't.) The hills also weren't as bad as I remembered them being, but considering how I've done three SUPER hilly half marathons with Brazen in the past year, that's not surprising. They really weren't so bad.

I completed my 5 loop goal in 5 hours, and I suppose I could've gone back out for another one (and made it a 20-mile day), but instead, I sat down and helped myself to this: 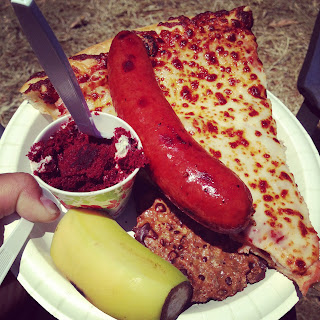 And then I decided to head back out and check out the mini-loop (.67 miles) that they open for the remaining hour, and it was pretty nice - flat, scenic, and totally manageable. Well, if I didn't have a belly full of pizza and spicy sausage. (Needless to say, I just walked the mini-loop.) They had a separate timing pad set up for the mini-loop that you had to cross every time you started another one.

I'm thinking about signing up for the 12-hour next year and attempting an ultra distance... Hmm...

This makes 10 half-marathons done for the year.* Number 11 comes this Sunday... the Jungle Run in Los Gatos!


*Even though I completed way more than 13.1, I'm still counting this towards my 13 in '13. The reason why I can count this one instead of, say, my full marathon as a HM is because I could've stopped at 13-ish miles and it would still count as an official race result. I cannot stop in the middle of a full marathon, because it would count as a DNF. You see?