A few thoughts on the movie for The Mortal Instruments: City of Bones 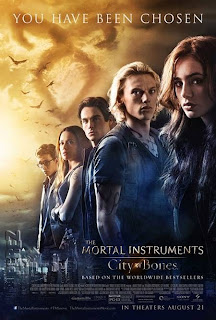 I'm not going to do an in-depth review, but I did want to jot down some thoughts, since I went to go see it yesterday.

I haven't talked about the book series before on my blog, but I will just issue a spoiler warning right now in case you haven't read them. Because I will spoil EVERYTHING.

So, first, a (relatively) quick overview of the books: City of Bones is book 1 in the Mortal Instruments series by Cassandra Clare. There are currently five books total, with a sixth one on the way, and essentially these are structured as two trilogies. The movie is based on the first one.

Clary Fray witnesses a group of teens murdering another teen in a club one night, and is disturbed to find out that no one could see it but her. Then her mom goes missing, essentially abducted in what looks like an awful attack and robbery. Clary then learns (I'm super-condensing here) that the teens she saw in the club committing murder actually belong to a race of Shadowhunters, and the kid they were killing was actually a demon - Shadowhunters kill demons. And also, by the way, there are also such things as vampires, werewolves, fairies, and warlocks. Oh, and her mother, apparently was a Shadowhunter, married to a very charismatic and evil Shadowhunter named Valentine (before she moved to New York and had Clary), but now Valentine is back, and he abducted her mother because she had hidden something called The Mortal Cup, and he really needs it to achieve his evil goals.

Clary starts hanging out with the Shadowhunters to figure out what's going on (who she is, how she can save her mother), ends up involving her best friend-who-wants-to-be-more-than-that Simon, and she finds out that her mother's best friend/her father figure, Luke, is actually a werewolf, and there is lots of craziness of the "My whole world has been turned upside-down variety." A strong attraction develops between her and Jace, who has his own tortured backstory, and they become even more tortured later on when, during the climactic confrontation with Valentine, they both find out that they are actually brother and sister. And then Valentine makes off with the cup and Jace, and that's the end of book 1. Sort of.

I only started reading the books because I found out that Jonathan Rhys Meyers was going to be in the movie, and then it took on a life of its own in my fangirl world. I've been excited for this movie, mostly because I was curious to see how they planned to make incest okay for the movie-going masses. In all honesty, as I was reading the first three books of the series, I was getting super squicked-out, and found their relationship super problematic for obvious reasons. They don't find out that they are actually NOT related until towards the end of book 3, and while they do their best to avoid making out in the meantime, I will just say that they are not entirely successful, and... yeah, that's just gross. Even if it ended up not being true later, AT THE TIME they believed they were brother and sister, and there was still, um, rolling around in the grass and face-smooshing anyway. GROSS, YOU GUYS.

But, of course, they get somewhat of a happy ending (well, until you read books 4 and 5), and they're not really related, and now they can face-smoosh all they want.

I MOSTLY enjoyed it. It was fun to see the parts from the book that I liked and to hear certain lines. I thought that Jace and Simon were PARTICULARLY well-cast and that they totally nailed it. The Silent Brothers really were creepy-looking and were pretty much how I imagined them. I liked Lena Headey as Jocelyn, and I loved that she got a chance to kick ass, because I always hear about her playing women who kick ass. The demon makeup and special effects were gross and awesome. I liked Lily Collins as Clary - I thought she did a good job matching the strength and depth of the character. And I love Jonathan Rhys Meyers, but I don't think Valentine was written very well (more on that later).

There were parts that were kind of cheeseball. Like, the Silent Brothers' mental voices were kind of laughable. The music that they chose to use (that wasn't movie score) felt out of place to me - during the vampire fight scene, it just felt forced like, "Hey, this is our big showing-off-the-Shadowhunters scene" or during the big romantic scene, the pop song they inserted was too "Hey, this is the big romantic scene." Like, THANKS, I GET IT, OKAY? If it were well-written, you wouldn't need to use the music to manipulate people's emotions. Also, the pacing was wayyyyy off. I don't know how it felt to the uninitiated, but it went through the book's events SO fast, and it almost just felt like the screenwriter was trying to check stuff off from a list or something.

But despite that, I was enjoying it. It was fun. And Jace is hot. And so was Luke, actually. (I'm 30, bro. It's not weird for me to like the father figures anymore because I'm older now!)

Until we got to the last half hour. And then I spent the rest of the movie in a state of WTF.

I didn't like the way they wrote Valentine. He came off as obviously psychopathic and straightforwardly evil and WHAT was up with the braids/dreads? YOU GUYS, Jonathan Rhys Meyers is a BEAUTIFUL MAN and you VERY NEARLY ALMOST made me find him unattractive! And Valentine is SUPPOSED to be attractive. There is supposed to be a seductive quality to Valentine, because how ELSE did he get so many people to follow him and be on his side? In the movie he was characterized as unequivocally crazy and evil, and I don't think that's right.

Anyway, so it started with Hodge TELLING VALENTINE, "You could lie and tell Jace and Clary that they're brother and sister, and it will torrrrrture them!" And then I was pissed, because I seriously spent almost two entire books being squicked out until it was revealed not to be true, but moviegoers got that spoiled for them right away. I was like, WHAT???

(And note: I'm guessing they HAD to do this, because of marketing and publicity and ratings and such, but still... I AM DISAPPOINT.)

And then there was a huge battle scene where Valentine sets up a pentagram in the Institute and Hodge helps him let in demons, and the werewolves come in to help, and it's like, WHAT ARE YOU DOING YOU CRAZY MOVIE PEOPLE? I suppose they were adding in elements from Books 2 and 3, probably in case they didn't get to make a sequel, but like, COME ON. If you DO end up making a sequel, what are you going to include THEN? None of the last half hour actually happens in the book. City of Bones has a far different ending, and yes, it's less climactic, and yes, it's a cliffhanger setting you up for Book 2, but COME ON.

That said (*deep sigh*), I still had fun watching it. I would watch it again. I would pay a little money for the dvd, but mostly because I adore all the cast members and would watch the special features. But I am still disappointed that they couldn't just TELL THE STORY, and for that reason, I would still rather read the book, anyday.

I don't always expect film adaptations to be identical to the books, but you'd think they'd at least get the basics right. When they added in that whole fight scene in Breaking Dawn Part 2, at least it made sense in-world.  I can't believe I'm about to say this, but dude, I wish they'd have gotten the Twilight Saga screenwriter to adapt City of Bones.


EDITED TO ADD:
Just remembering - I heard NO TRACE of an accent from Magnus Bane. Did they overdub Godfrey Gao, or did he have a particularly awesome language coach?

Um, he looked AWESOME as Magnus, by the way. I guess some people didn't enjoy his acting, but I just chalked it up to Magnus being Magnus.