Awwwww yeah. Payday means that I can finally get the much long-awaited Cold Chemistry palette from Sugarpill (I feel like bloggers started talking about this over a YEAR ago), and while I was at it, I was curious about the new Elektrocutes neon colors, so I ordered Hellatronic, because it's the one I'd most likely wear (being purpley).

Look, here are some photos.

I like new packaging of the palettes by the way - not just this one, but the previous square-shaped palettes - instead of coming in a box, they come in a paper sleeve. That's what I took pictures of above.


As always, I am the MOST excited about the purple shade, Elemental Chaos. But they all look stunning, and are darker than Sugarpill's usual fare, bright, dayglo colors.

Speaking of, here are photos of Hellatronic from the Elektrocutes collection:


It's a bright bluey-purple with lots of sparkle. Holding the two jars next to each other, I can definitely see that it's a lot more purple than Royal Sugar (which I thought would be really similar).

As much as I had been waiting for Cold Chemistry, I really wanted to try out Hellatronic first, because I've been reading lots of reviews about the Elektrocutes, and it sounds like they are a little tricky to work with. (See reviews by Temptalia and xSparkage.) It sounds like they are more prone to fallout than usual, and you need an stickier base than you would for normal eye shadow. And as much as I love bright colors, these are REALLY bright (neon!), and I would not wear them often enough to justify the extra effort.

However, Hellatronic sounded gorgeous, and I love purple, so I decided to give it a spin. 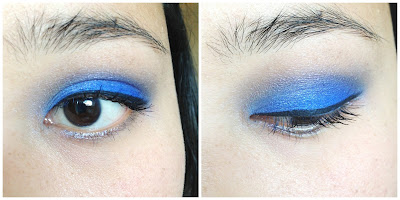 Hellatronic actually was a lot darker than I thought it would be. It's still bright by normal standards, but I feel like Royal Sugar is brighter (as is UD's Chaos, which looks just like Royal Sugar).

I used UDPP and also NYX's Jumbo Eye Pencil in Milk as a base. It was SPARKLES GALORE, but the pigment was a big uneven/patchy. I had to pack a lot of it on my lid in comparison to Sugarpill's other loose shadows, and of course, there was fallout.

But, I really like the color. It's beautiful. I'm not sure if I would like the other Elektrocutes as much, but this is really, really gorgeous. I don't regret getting this one.

That's all I've got for now. I'm looking forward to spending the week with Cold Chemistry. Hopefully I will have some stuff to post for it.