I love Urban Decay Face Cases. Back in high school, they were among my first high-end makeup purchases, and from then on, I've been an Urban Decay megafan ever since.

See this post? I have owned ALL of these.

And now I have the newest one, Shattered (which I half-expected to come with the actual eyeshadow color Shattered *shrug*). There is another one, Anarchy, that will be Sephora-exclusive.

I'll spare you the products shots (because there've already been a LOT posted this week by the big bloggers), and I'll just post the look I'm wearing today with all five shadows. 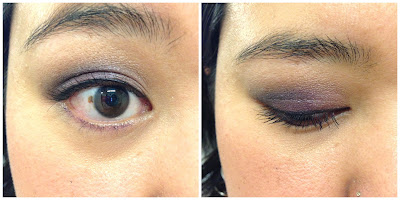 I'm also wearing the Lovechild gloss pencil, Overexposed blush and the highlighter, but I can't photograph those well on my face.

Thoughts:
Every color is pretty much a winner. The two lightest ones needed a little extra, but it could just be because I'm dark-ish-skinned. (Same thing with the highlighter.) The blush, I was told, was super-pigmented, so I went into it with a light hand.

I already like and have Zero and Lovechild, and that was my only "problem" - I already have them. I wish they could've given us at least an exclusive gloss pencil shade like with the Anarchy face case. I have accumulated a TON of Zero pencils over the years from all the different UD palettes, and have even had to give some away, especially now that I never use Zero anymore now that there is Perversion in existence. I also kind of wish that, instead of two blushes, we got a bronzer, but maybe that's just me.

I had a really hard time opening the bottom compartment, and I don't know if it's just the one I happened to get or not - I really had to dig my fingernails in to open it. And when you try to set the face case down with the bottom compartment open, it ends up top heavy and actually tips over backward. It's okay, because it fell over gently enough that the gloss pencil just rolled into the compartment formed by the top compartment tray, but I imagine it would be a PITA if it were to fall over harder (say, off the counter or something). Speaking of which, I totally dropped my face case on the bathroom floor and everything was fine.

I am in love with this! It's good, UD quality as you would expect, and the colors are totally my colors - purple, which I love, and taupey browns. Aside from my tiny complaints above, it is pretty much AWESOME.