"The circus arrives without warning..." 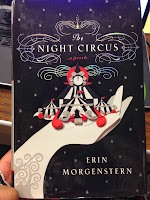 "The circus arrives without warning. No announcements precede it. It is simply there, when yesterday it was not. Within the black-and-white striped canvas tents is an utterly unique experience full of breathtaking amazements. It is called Le Cirque des Rêves, and it is only open at night.
But behind the scenes, a fierce competition is underway—a duel between two young magicians, Celia and Marco, who have been trained since childhood expressly for this purpose by their mercurial instructors. Unbeknownst to them, this is a game in which only one can be left standing, and the circus is but the stage for a remarkable battle of imagination and will. Despite themselves, however, Celia and Marco tumble headfirst into love—a deep, magical love that makes the lights flicker and the room grow warm whenever they so much as brush hands.
True love or not, the game must play out, and the fates of everyone involved, from the cast of extraordinary circus per­formers to the patrons, hang in the balance, suspended as precariously as the daring acrobats overhead."


Happy Halloween! My costume this year is inspired by The Night Circus by Erin Morgenstern

Word spreads quickly in such select circles, and so begins a tradition of reveurs attending Le Cirque des Reves decked in black or white or grey with a single shock of red: a scarf or hat, or, if the weather is warm, a red rose tucked into a lapel or behind an ear. It is also quite helpful for spotting other reveurs, a simple signal for those in the know. 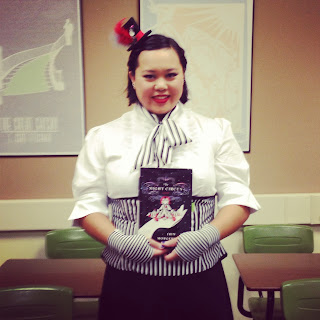 And because it isn't Halloween without the makeup look: 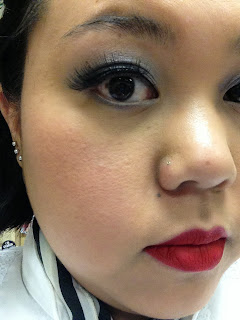 - From the Kat Von D Spellbinder Book of Shadows: Dark Throne (in the outer half of the lid), blended with Holy Bible on the inner half and the crease (on top of UDPP)