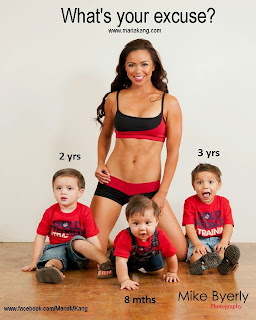 Before I start, I want to make it clear that I am NOT criticizing this woman or women who look like her. Nor am I criticizing anyone who draws inspiration from this photo to make positive changes in her own life.

But I AM about to get a bit ranty. I've been seeing these "fit mom" memes everywhere for a long time, and in truth, they rub me the wrong way, and here's why.

If you ask me who I think the fittest people in the world are, I would have to say Crossfitters and endurance athletes. Whether it's your first marathon or your fiftieth, whether it takes you five minutes to complete a WOD or fifteen, it takes a certain baseline of fitness. But if you show up to ANY start line or ANY CrossFit box, you will notice that not everyone looks the same. SOME people look like the woman in the photo - feminine, conventionally hot, tanned, non-cellulite-y, smooth-skinned with nary a blemish. But many other people do NOT look like that, and before you interject to tell me that it's because those people are not as fit as the woman in the photo, let ME interject to present you with a couple of photos: 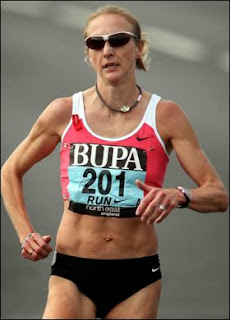 This is Paula Radcliffe. She is the WOMEN'S WORLD RECORD HOLDER in the marathon. You can't get more elite than that. She does not look like the woman in the first photo. 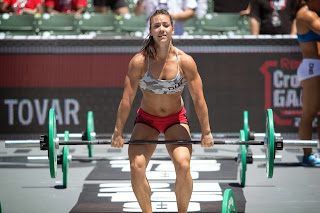 This is Camille Leblanc-Bazinet. She's an elite Crossfitter, and she's become a majorly recognizable face for CrossFit because she's really pretty. But even she does not look like the woman in the photo.

You want to know what's also different about these two photos I shared versus the Fit Mom picture at the top? They're action photos. They are photos of athletic activity. I'm sure they have their fair share of posed photos as well, but they also have lots of action photos, photos of them DOING something other than looking pretty.

AND YET... through this whole Fit Moms thing, we are consistently presented with only ONE way to look, one way to BE. The underlying message of the "What's your excuse?" meme is "What the hell is your problem that you don't look like this person?" and that makes me ranty.

Let's talk about the "fit" part of "Fit Moms." Fitness, as I said, looks like many different things. That is because fitness isn't a LOOK at all. Sure, there is a "glowiness" that unhealthy people lack, but aside from that, fitness and health don't involve your looks at all. They are about how your body functions and how it accomplishes certain tasks.

But I've never seen a Fit Mom photo that displayed someone's spectacular blood pressure or their half marathon PR or their one rep max back squat. I've never seen a Fit Mom picture that said "Boston Qualifier - what's your excuse?" (God forbid we make people feel bad about the things they can't do!) In fact, I feel like I only ever seem to see Fit Mom photos that are photos of a woman who fits society's definition of "hot," and she's always thin with a light touch of muscles (GOD FORBID she have muscles that are too big), and she's always posing prettily instead of displaying her athletic prowess. (I've seen pictures of Serena Williams where they photoshopped her fantastic thighs SMALLER so she would look more "feminine.")

And truthfully, we are not all genetically-programmed to look that way. Even if I were able to shed all my excess bodyfat, I still wouldn't look like the Fit Mom up there. My body just doesn't work that way. And I am okay with that.

Now let's talk about the "Moms" part. The truth is that being an athlete, even a non-elite one like I am, takes a lot of time and a lot of money. I have a fairly strong support base of people who watch my daughter while I'm out for a run or at derby practice, and there is not a single day that I don't feel guilty about it. Not everyone is as lucky as the woman in the photo - they don't have the time, money, energy, or ability to achieve a HOT BOD. Like, they LEGITIMATELY don't, because maybe they're still healing from a difficult pregnancy, or they work for a jerky company with a lousy maternity leave policy, or they don't have other people in their lives to watch their kids, or their kids have special needs that require all their focus. Societal mom-shaming deserves its own blog post, but there is no shortage of people ready to make women feel bad for not dedicating every second of their lives to their children, so can we lessen the burden, please? Let's not add to their guilt by making them feel bad for not looking like models too.

And it shouldn't go without saying that I have never seen a Fit Dads meme. There are no photos of hot men with their children with the caption "What's your excuse?" (I know, I know - many women would not object to seeing such a thing), because society doesn't emphasize men's bodies and appearances NEARLY as much as women's. The Fit Mom meme implies that women SHOULD aspire to look a certain way, and if we don't meet that standard or even care about doing so, we're failures somehow. Men are not subjected to that kind of pressure.

And in case you've decided to write me off as simply being jealous of the Fit Mom, I have to tell you that I'm actually not, and that is the truth. There was a point in my life when I would have been, because there was a time when I bought into society's message that I needed to look a certain way, and I thought I was being inspired, but really I was being told to hate myself. Looking back on it now, I was desperately unhappy EVERY DAY because I did not look like a fitness model. And now I'm not. I still don't look like a fitness model, but I'm a two-sport athlete (I stopped Crossfitting because time and money) and I feel satisfied and fulfilled, while at the same time inspired to do better. (And "doing better" is not about how I look, but how I perform.)

To reiterate, I'm not criticizing the woman in the photo, nor am I criticizing anyone who is inspired by her. I AM saying that if we're trying to encourage fitness, we should be actually focusing on FITNESS and showing all the ways people can be FIT, rather than this one narrow definition of fitness (that is more about being hot than being fit) that not everyone can meet. So if we're going to have Fit Mom photos like the one above, let's not stop there. Let's show a variety of Fit Moms, doing fitness-y things, and let's change the cultural discourse surrounding fitness, and moms, and women in general.

*Updated to add*
I wrote this post BEFORE I read more about this woman and her fauxpology... yeah, I'm just not going to go there right now. *facepalm*