January 21, 2014
(For the record, I've never been sure if it's "Tinkerbell" or "Tinker Bell," and I don't really care enough to look it up and correct myself. The race stuff (in my photos) looks like it says "TinkerBell," so... yeah, I don't care.) 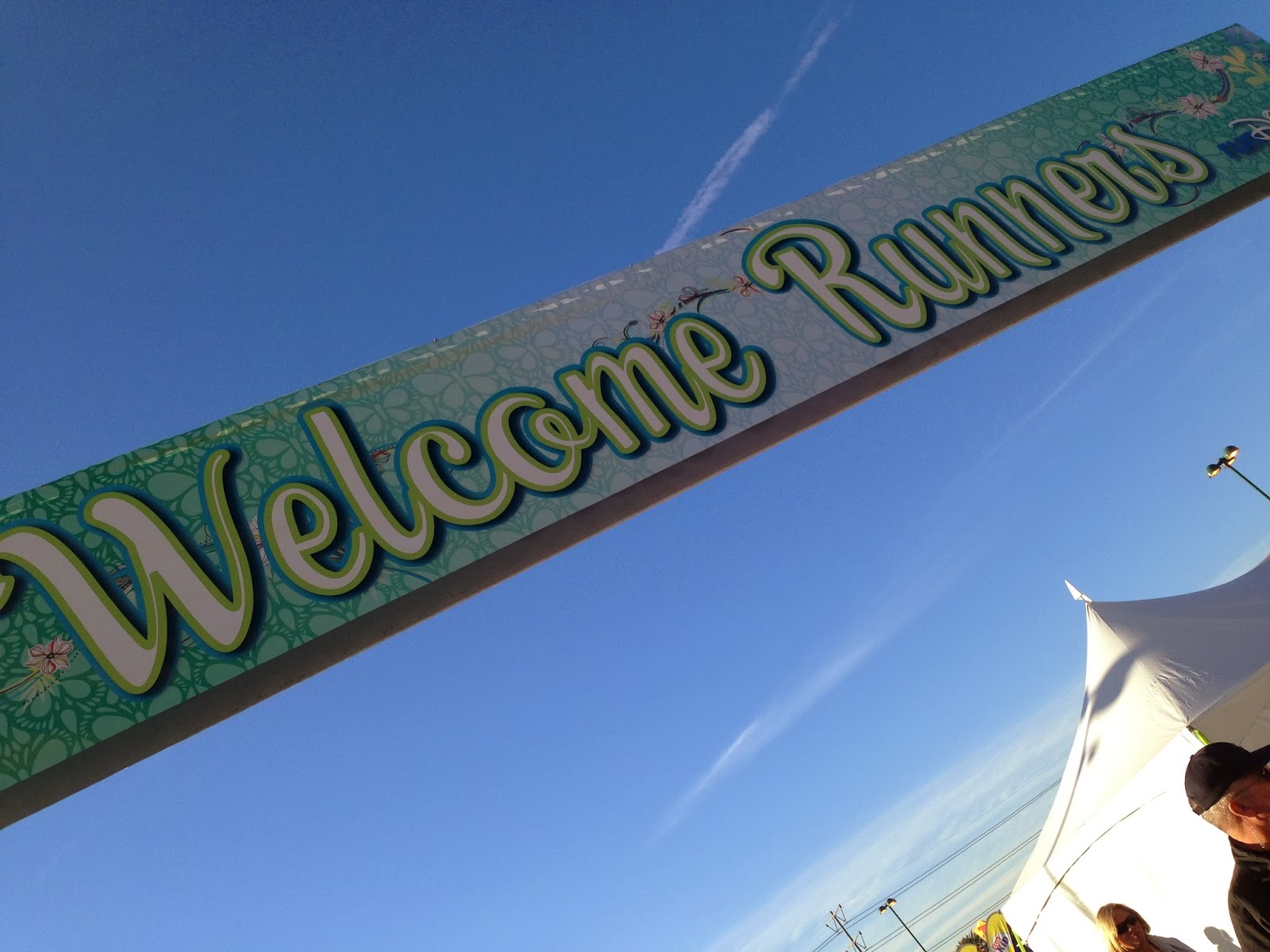 I've been saying that this would be the last year I run Tinkerbell, but I think I still want to come back next year. And the year after that. At least to be a five-year streaker.

This year, a few things were different.

Becca didn't come down with me because she had important life stuff to do. But someone else important to me made the journey for her very first race - Jolie! My baby girl has been excited about racing since we first signed up in July. She has, for at least the past year, been very aware that her mommy runs races and has always been intrigued by the medals I bring home. I think the first one she was REALLY interested in was my Tinkerbell medal, because she knew it was a Disney character, and she was two when I ran the inaugural one. And this year, she got to run too! She and I and my parents drove down together on Friday to pick up race packets, since the Kids Race was on Saturday morning, and mine was on Sunday.

This was also my first time ever staying at an official Disney hotel, which I was suuuuper excited about. We stayed at the Paradise Pier, which is right next to where all the race stuff happened. (And I knew this because I've done this race the last two years.) It was great to just wake up, get dressed, and walk straight downstairs to my corral, and to not have to walk two blocks after the race to get back.

Of course, this meant I took pictures of everything, for posterity. I was pretty obnoxious with my phone this weekend.

So on Friday, we picked up stuff from the Expo, hit the pool (because it was ridiculously hot), and just walked around Downtown Disney a bit after dinner at Slater's 50/50. One of the special things they do for runDisney participants is to offer twilight tickets (for 3pm until closing), and with Jolie in tow, a full-day ticket would just be a waste, so we got them for Saturday and Sunday.

Saturday morning was the kids race! Jolie's age group did the 200m dash, and it was just really adorable to see so many kids in costume. There was such a long wait in such a HUGE crowd of people that I was glad they were allowing parents to run with their kids, because there's no way Jolie would or could stand there for so long all by herself.

So we ran! Jolie ran the whole way without stopping, and we crossed the finish line hand in hand. I was such a proud mama :) 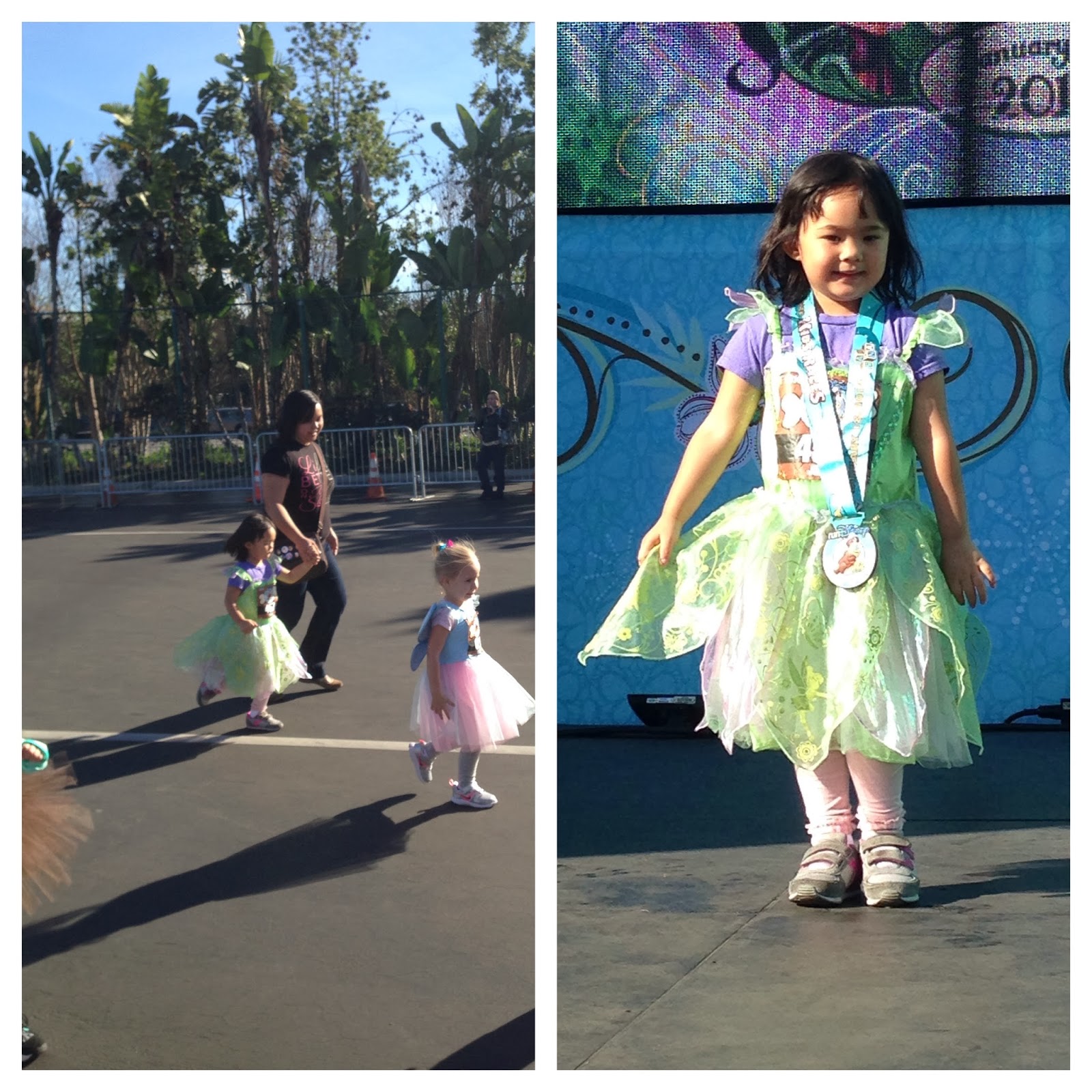 She received a rubbery medallion for finishing, which she was VERY proud of, and a tshirt that said "I did it!" on the back, which we got at the expo, but I refused to let her wear it until she actually did the race. (How can you wear a shirt that says "I did it" if you haven't done it yet?) It's my personal thing that I don't wear the shirt of the race I'm running until after I've run it, and I want Jolie to do the same. 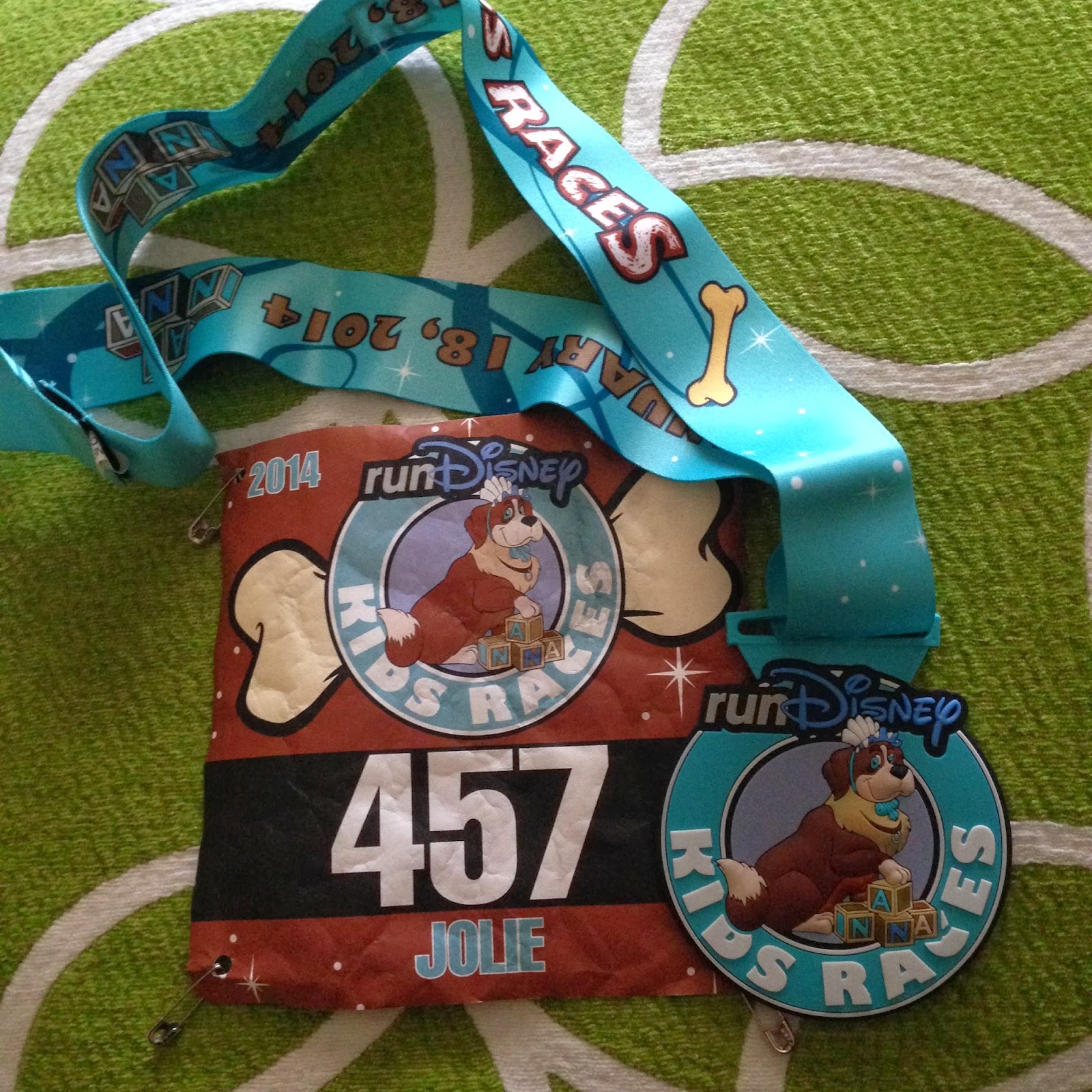 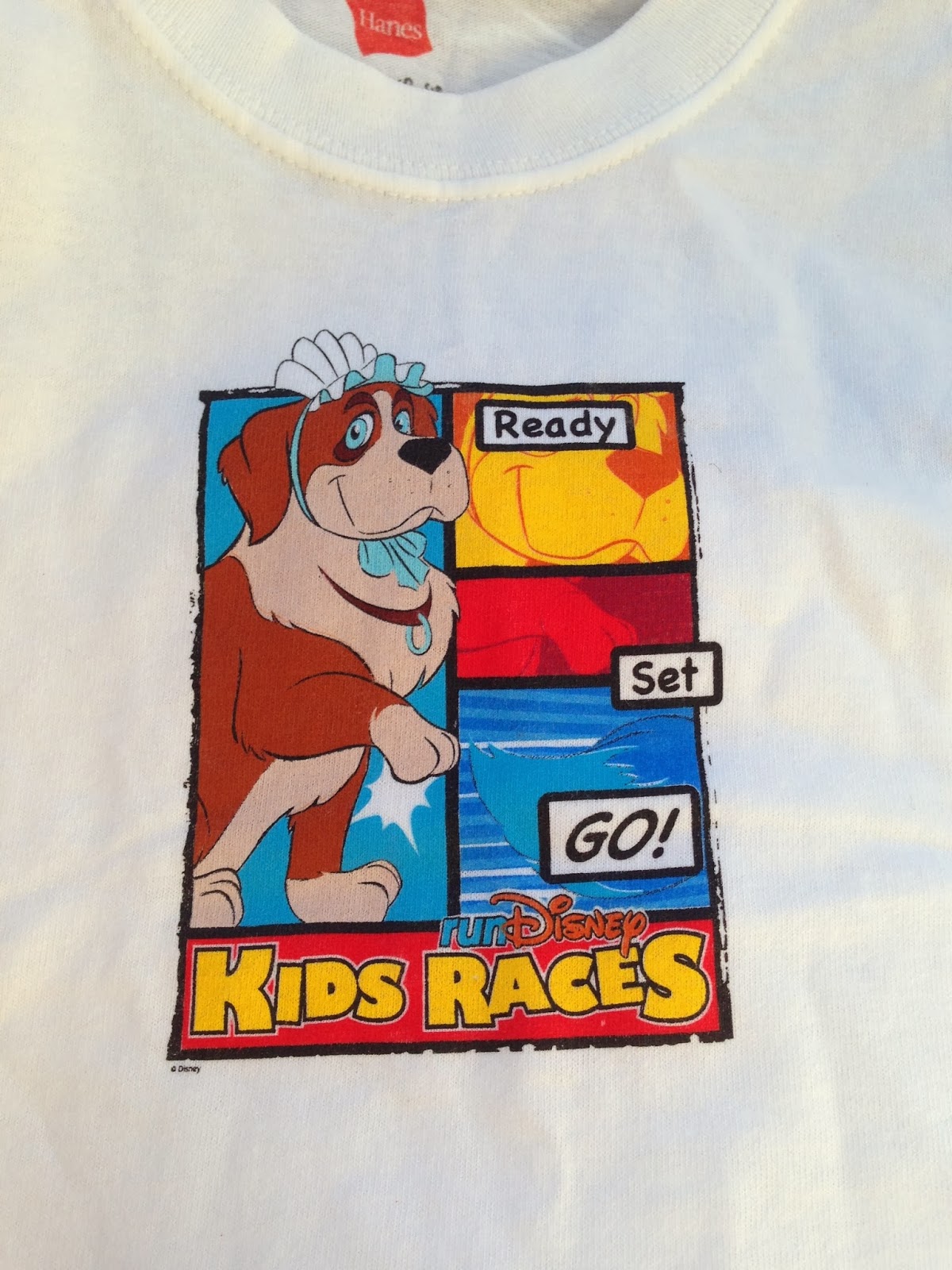 I loved that there was a "child claim tag" that parents had to tear off the bib and keep on their person, and the exit area had lines where Disney employees checked to make sure that the parent had the claim tag for their child, and if they didn't, they had to show ID that matched the parent name on the list. I appreciated that a lot.

We spent that evening at California Adventure Park, which Jolie's never been to. I think she actually liked CAP more than Disneyland, since that's where the Pixar stuff is, and she got to go on the Mickey ferris wheel (her first ferris wheel!) and all that. I had never been on Toy Story Midway Mania before, and I think that might be my favorite ride ever (I mean, other than my favorite favorite, Space Mountain). Here's a photo of the final score between me and my dad. He beat me. 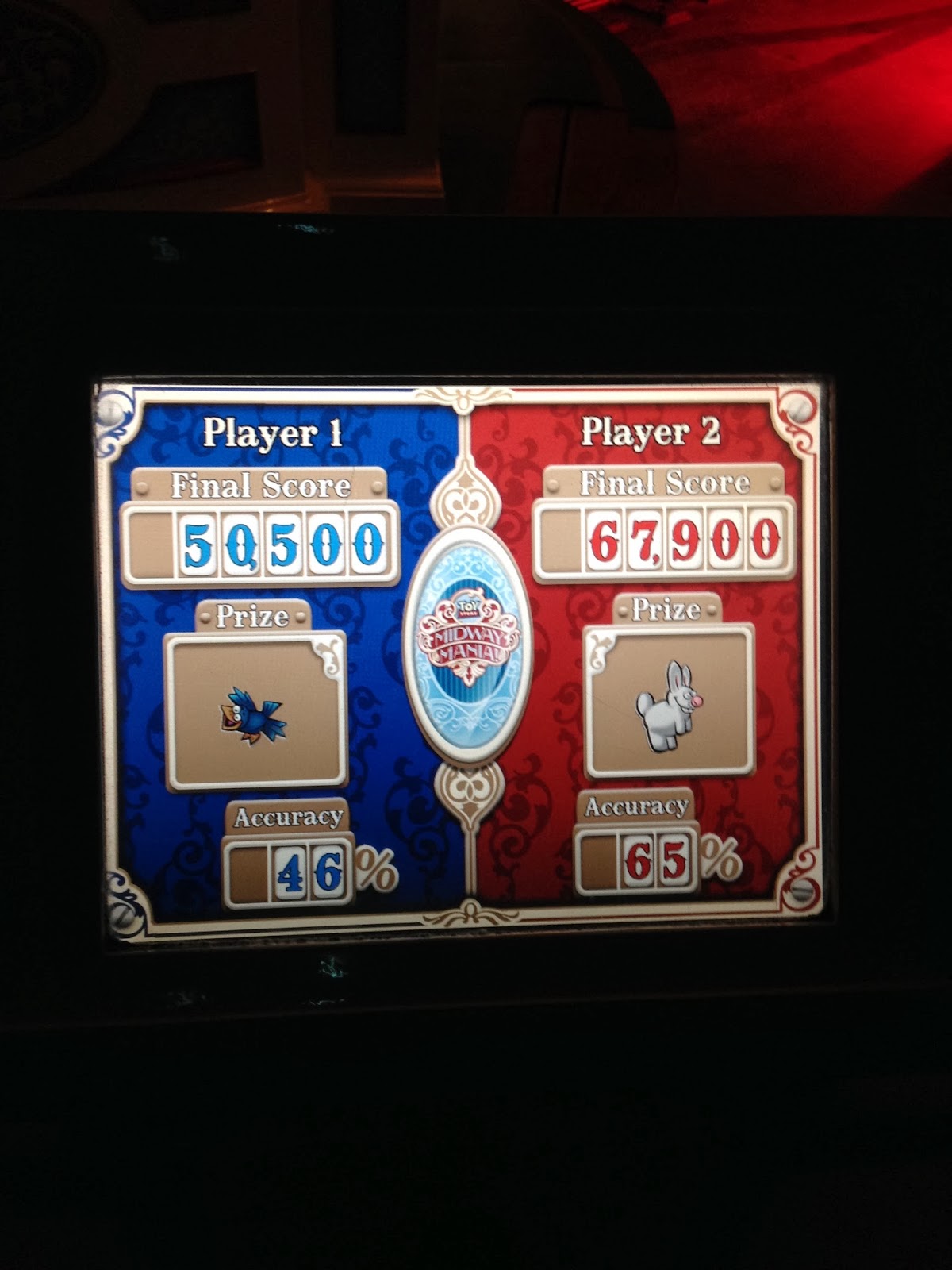 After a long, fun evening, the walk back to the hotel was kind of torturous. Especially given the fact that I had a race the next morning.

As I said, it was awesome just to be able to walk downstairs and be at my corral. (That's one plus of being super slow - I would've had to walk farther up if I were in the A or B corral!) It was actually kind of chilly that morning. I met up with my friend Lindsay, whom I know from derby and who was running Tinkerbell for the first time. We stayed together for about the first mile or two and then split up, since I was trying to stick to intervals and she wanted to stop and take pictures :)

It was difficult for me pretty much right away, since I've got no training or conditioning - the only running I've done recently is last weekend's 5k, and I've only just started going back to CrossFit and derby after long breaks from each. The last two years when I've run this race, I ran PR times - I knew that was not going to happen this year. I decided I would be happy finishing around 3 hours, but knew even that would be difficult.

I was exhausted and sucking on a cough drop after six miles. After nine miles, I had changed from a 3/1 interval to a 1/1 because my feet were starting to HURT. The feet hurting thing is a product of not enough mileage, like literally not spending enough time on my feet and preparing them for so much work over such a long period of time - even at my peak level of training, I've been tired, but my feet didn't hurt. This weekend? They totally hurt.

I completely coincidentally ran into Lindsay during the last mile - I guess she had passed me at some point and I'd missed it. My goal time was now to finish in 3:15 - I figure a 15:00 pace is respectable. I enjoyed being out on the race course, but I was also eager to just FINISH and get on with my day. (And take a nap.) Lindsay and I finished the race together. As we entered the INTERMINABLY long finish chute, which was lined and packed with spectators, I saw my mom, which was awesome because my family has NEVER been at a finish line to greet me, and I came in at 3:14:56, which oddly, was both my watch time and my chip time. (That's never happened to me before.) It was one of my slower times of the past year, but again, considering the (lack of) shape I'm in and the fact that I've been struggling with health/injury lately, I'll take it as a win that it wasn't my worst time ever, and (aside from coughing and foot pain) it wasn't my worst race experience either.

And to cap off the weekend, here's Tinkerbell flying in the sky during the fireworks show at Disneyland that evening:

So yeah, I definitely want to come back and do this again! I want to do at least the first five, because I want to see if they do something special for the five-year anniversary of the race (like they did for the Princesses half marathon last February). I am also now considering doing the 10k that they added this year, mostly just because I want the 10k medal. (It looked cool!) Though, 19.3 miles in one weekend might kill me. (Well, maybe not if I train.) And I know Jolie wants to come back to race again.

By the way, they kept the same course from last year, which I really liked, because we spent the first six miles on the Disney premises, and it minimized the amount of time we spent running around Anaheim. Win! I hope they always keep it.

On deck: Jenny's Light 5k next weekend (third weekend in a row, for those of you keeping score at home), and then... I don't know.

I am now officially registered for the Santa Rosa marathon, so... second week of April is my start date for training! Right now, I need to focus on building base mileage, which may be pretty much all I can do because my knee refuses to heal 100%, and I'm afraid that falling on it during a scrimmage will just reinjure it. (AGAIN.) I kinda feel like my derby days are numbered :(

But I don't want to end this post on a sad note, so... MORE FIREWORKS! 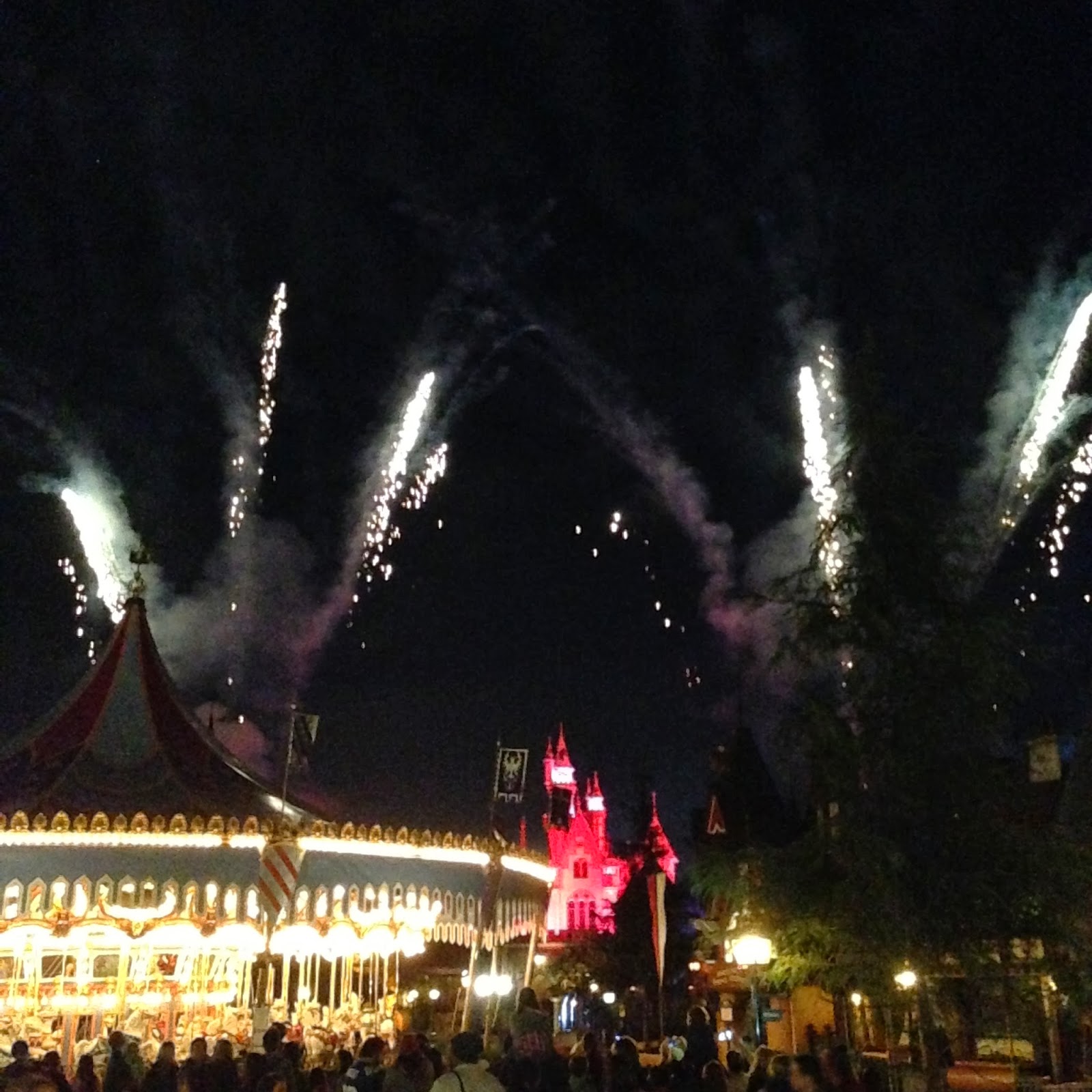