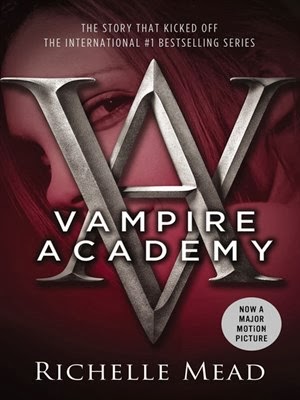 I admit, I tried to read this book years and years ago, when the whole Twilight craze was going on and other vampire books were being featured on the Featured table (oh god, remember REAL LIFE book stores?), but I couldn't get into it back then. Maybe I just wasn't patient enough to stick it out through all the new terminology, because you don't get a straightforward explanation of moroi, strigoi, and dhampir until a while into the book.

I finally decided to give it another try after the movie came out this weekend and my friends who HAD read the book and seen the movie raved about it, and then I saw this list on Buzzfeed. (Go read it, I'll wait.)

It's like they were singing my song - female empowerment? Bechdel test? Unfailingly loyal friendship? Positive female sexuality? Anti-slut-shaming? Realistic and sympathetic depictions of mental illness? I have to see this movie NOW. Or rather, I needed to read this book, NOW.

So I essentially finished it all in one day, and I felt compelled to make my own list - it's similar to the Buzzfeed one, but it's about the book instead.

A few things I loved about Vampire Academy:
(please note, I haven't read the other five books in the series yet, so I am unaware of further character arcs and plot development - this is JUST based on the first book)

- Possible racial allegory
It's not REALLY about vampires. I mean, pretty much everyone is at least partially vampire, but since the story takes place almost 100% within their world, it's not fraught with the same sort of drama you might see in other vampire stories, where there's a lot of to-do about not being discovered by humans and how vampires fit into the human world. We're not really in the human world at all in this story, we're in the vampire world, and thus, all things being equal (?), I find that the existence of vampires presents a different sort of story.

I saw a story being told of race, rather than supernatural-ness, at least between the moroi and the dhampirs.  Moroi are full vampires, and are the privileged class in this universe. Not all moroi are royalty or financially privileged, but all the members of the royal families are moroi, if you catch my meaning. They are pale, beautiful, and desired (mostly), and they comprise the upper strata of vampire life. Dhampirs are half-vampire/half-human, and their lives seem to be focused on their physicality in some form or another - most dhampirs spend their lives being trained as guardians for the moroi, meaning their lives are focused on fighting and defending (and whatever knowledge is necessary to go along with that). Additionally, the story mentions several times that some dhampir women who are impregnated out of wedlock and do not choose to become guardians might become blood whores, used by moroi men for blood and sex. Rose (the protagonist), a dhampir, describes herself as curvaceous, with amply-endowed breasts and hips, and while she doesn't say if other dhampir girls are like that, she does make a general statement about moroi girls being thinner and more waifish.

One race is privileged, pale, and set up to rule the society. The other race is used for their bodies (in some form or another) and set up to support and/or sacrifice themselves for the other race. Again, I don't know where this might go, but I think there is potential for an interesting discussion here.

- Actual strong female characters, and not just Strong Female Characters
There has been a lot written recently about Strong Female Characters, but I'll just try to sum it up thusly: Hollywood has tried to compensate for subservient, docile female characters by creating a lot more female characters who are ass-kicking and impervious to ALL THE THINGS, and are essentially just like male action heroes, but female-gendered. That's a nice start, of course, but if the only two types of female characters you ever see are the subservient, docile ones and then the Strong ones (I capitalize it because it's definitely become a trope!), that's still not representing women realistically and accurately. If you look at male characters, there are Strong ones, there are weak ones, there are weak ones who are occasionally strong and Strong ones who are occasionally weak, and the entire gamut in between. Women should be represented the same way, because that's how we are in real life too: sometimes strong, sometimes weak, sometimes heroic, sometimes flawed - no matter what, completely and utterly human.

Rose, the protagonist and narrator, IS kick-ass, but she's not just that - sometimes she's selfish, sometimes she's a jerk, sometimes she's selfless and heroic, sometimes she's confused, sometimes she's aggressive, sometimes she's whiny... I love that we get a character who is all of these things. Lissa, her best friend and a moroi, is definitely more "lover" than "fighter" but she experiences her share of dark moments as well. Even Mia, the moroi who antagonizes Rose and Lissa at every turn, has her own private struggles that, when revealed, really do make you feel sorry for her and understand why she is how she is, and even though Rose (and the reader) still dislikes her immensely, she still admits, "Mia is a survivor" and that she won't stay down for long. I feel like these are the sorts of characters that teen girls should be reading about.

(The main male characters are pretty well-rounded and interesting too!)

- Unabashed, unapologetic female sexuality
Speaking of depictions of women in movies, it's hard to get around the sexuality issue. In particular, with movies about teen girls, you get a lot of (sometimes subtle, sometimes overt) proselytizing about the importance of purity and virginity and that sex is bad and that the burgeoning sexuality of being a teenage girl is something to be feared.

No way. Not here. Rose unapologetically shares her sexual feelings with the reader, and she's pretty unapologetic about sharing them with the guys she's attracted to as well. She's in charge of her body, she defines her boundaries, and she goes for what she wants, and WE ROOT FOR HER.

Lissa is not a virgin, and that is established in a couple of sentences, and that's it. IT AIN'T NO THANG. There isn't really a dilemma of loss of innocence or anything tragic or dramatic like that; it is one tidbit of knowledge about her and it is not a big deal. Mia's sexuality is criticized only in that she uses it to manipulate others into slut-shaming Rose. There is a definite anti-slut-shaming stance as it is something done by the unsympathetic characters in the story, and they end up getting punished for it in some way or another.

- Its treatment of mental illness
I'm not going to go into depth, since this is a major spoiler for the story, but it definitely handles mental illness with care and respect and proper gravity. After years of teaching high school, I STILL get sick to death of hearing students joking about cutting. I don't think cutting and depression are things to be laughed at, and I really appreciated how the story addresses these behaviors and feelings, and (as the Buzzfeed list says) it shows characters being supportive of one another.

There is kind of an unflinching view of the humans who live to be Feeders (essentially, food sources for the moroi) - vampire bites induce a sort of euphoria akin to getting high, and their vampire society looks at these Feeders as drug addicts (although they are taken care of and given food, shelter, etc). But even though it's a very stark opinion of drug addicts, even Rose (who has had to give Lissa her blood as a last resort) understands and in a way sympathizes, because she knows what that feeling is like.


Vampire Academy is interesting, funny, nuanced, and all-around enjoyable. I can understand now how it spawned five sequels and a spinoff series (and also a movie, which I will now totally go see). Also, it doesn't insult my intelligence and it presents characters that we can actually admire.

I know the whole "Still a better love story than Twilight" thing is getting really old and tired (well, it is for me), but in this case, I would wholeheartedly apply that description, because it's true. And the awesome part is that what makes it a better love story than Twilight is not a romance, but the friendship between two strong, intelligent, complex girls who are there for each other through everything.