March 11, 2014
I don't always think that movie tie-in makeup collections are a good idea (hi CoverGirl, did you even READ The Hunger Games/Catching Fire before suggesting ways we could look like Capitol citizens?), but I was actually pretty gung-ho hearing about this Divergent collection from Sephora. In addition to the box set I'm about to write up below, there is also a separate palette and a nail art kit.

(Psst... I'm not going to explain Divergent to you because you can google. This post will assume you know the general story, and will not include major spoilers past the first book.)

First, a word about the packaging: GORGEOUS.

Everything comes in this giant box with a photo of the ferris wheel. The opening of the box (as in the above photo) is the Divergent logo, with the slash going diagonally.


The palettes inside also have the ferris wheel photo, but broken up between them:


They're cardboard palettes, but the surface is textured and feels fancy. Conceivably, one of the eyeshadows is detachable at the logos (which are plastic, not cardboard), but they were all three stuck on pretty tight and I didn't want to risk breaking something trying to take them apart.

So, since this is Sephora-made, you can expect that the brush is not going to be some dinky little thing that falls apart. I personally don't care for the fluffiness of the eyeshadow end (for applying shadow, anyway - for blending, it would be great), but the cheek end is pretty wonderful. It's contour-shaped, which makes it great for everything in the face palette (which I'll get to). The handle is embossed with the Divergent logo as well.

There are four lipglosses, and they are all pretty sheer, so when I actually apply these to my lips, my natural lipcolor kind of overrides the differences in shades, for the most part.

So yeah, keep in mind that I beefed up application on the back of my hand for the swatches. These don't look noticeably different on my lips aside from the shimmer.

Oddly, I was MOST excited for the face palette, because it contains two blushes, a highlighter, AND a bronzer. (I'm a big fan of consolidating packaging, especially on a busy morning.) Everything was soft, smooth, and pigmented. 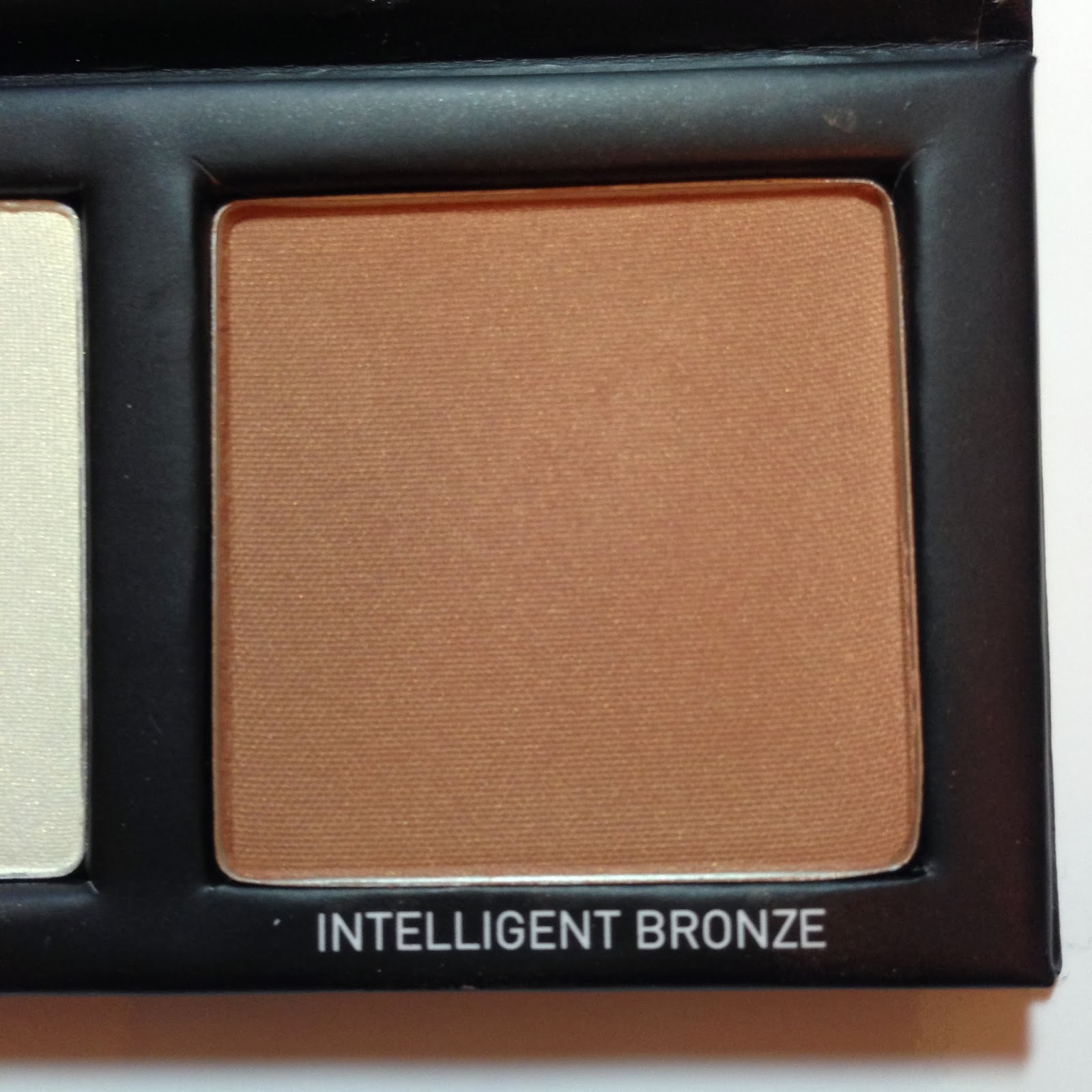 So now, the eyeshadow palettes.

There are three, and each one is named for one of Tris' results on her aptitude test: Erudite, Dauntless, and Abnegation. (Because remember, being divergent means that you don't fit neatly into one category.) My issue right off the bat is that I understand why they chose to name the palettes after those factions (to honor Tris), but COME ON. Abnegation would NEVER wear makeup. Also, maybe it would've been too obvious, but I would've loved to see them work in the factions actual trademark colors (Erudite is blue, Dauntless is black, Abnegation is gray, Candor is black and white, and Amity is yellow and red.)

In each palette, there are four "regular" shades (of various finishes - matte/satin/shimmer), and also a detachable "High Gloss Transforming Eye Shadow" (their words!). From what I could tell, the texture of those are micro-glittery - they remind me of UD's Moondust eye shadows. Choose (from the Erudite palette) and Transform (from the Abnegation palette) swatched VERY similarly on me, despite looking different in the pan.

All the shadows are really lovely, color-wise and quality-wise! None of the colors are particularly special, and I probably have dupes for all of them, but the point is that I love Divergent and I like collecting palettes :) Everything was buttery-soft and very pigmented, and on that front, I have no complaints.

Erudite palette:  On the whole, I feel like this was too warm for Erudite. They're factual, clinical. While obviously not all Erudite are evil, for the most part, they are the villain faction. How can you have warm, shimmery shades like Peaceful Shimmer and Humble Sheen in a palette named after the villain faction? Tris doesn't even CONSIDER choosing them, even though they're one of her results. If they weren't going to include gray in the Abnegation palette, I would've expected to see it here. An Erudite palette should invoke different feelings than this one does. (That said, this is a beautiful palette, and the quality is great. I just have... literary objections.) 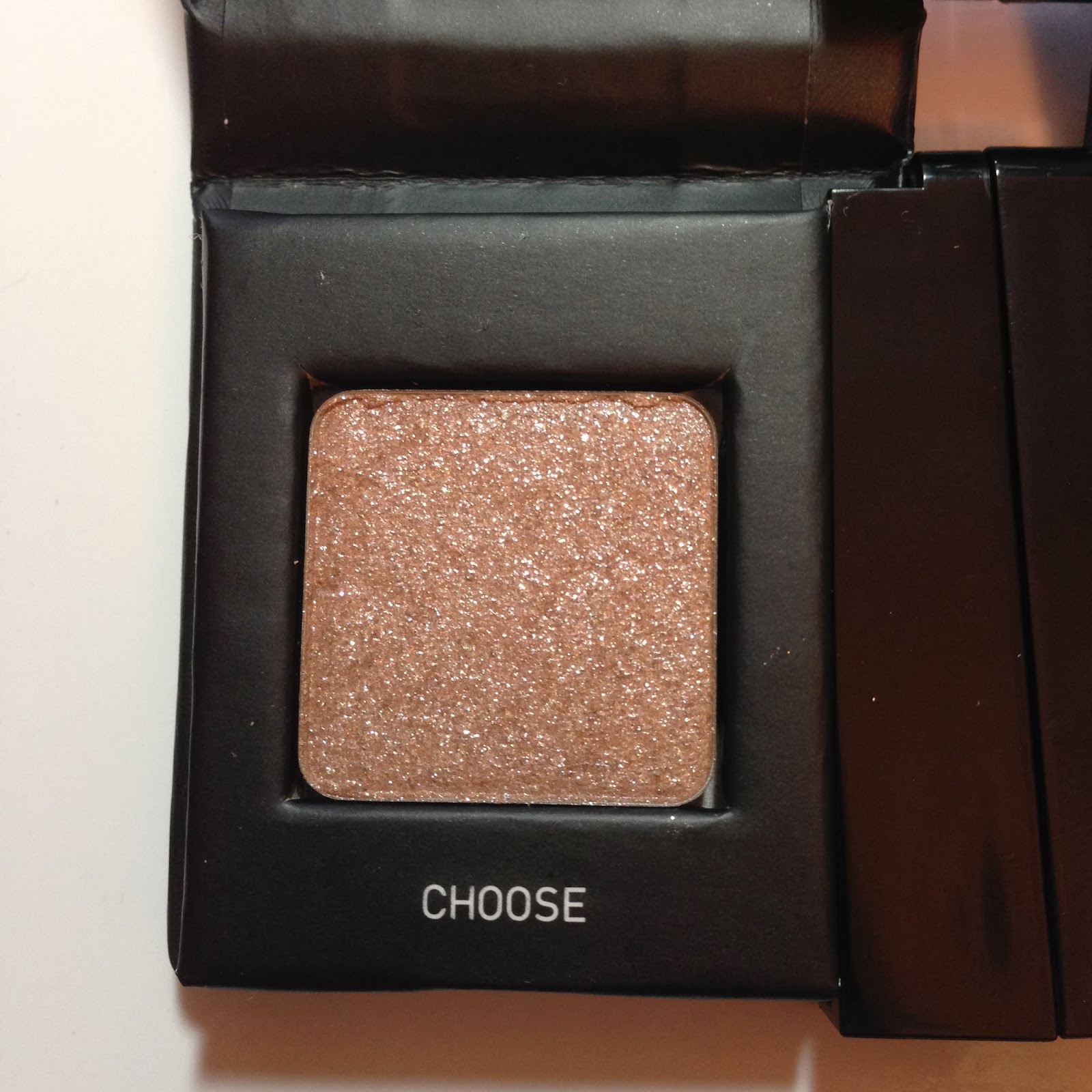 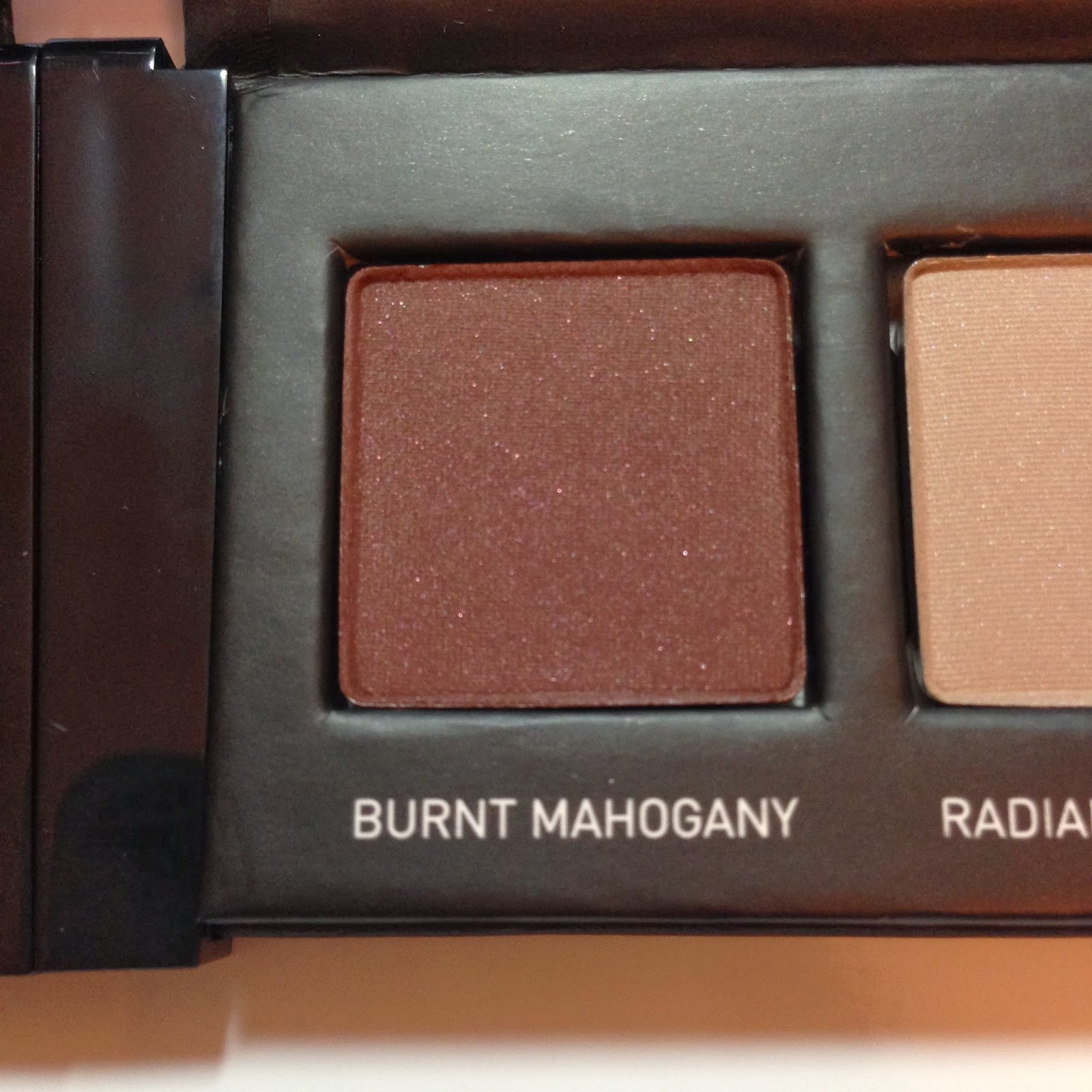 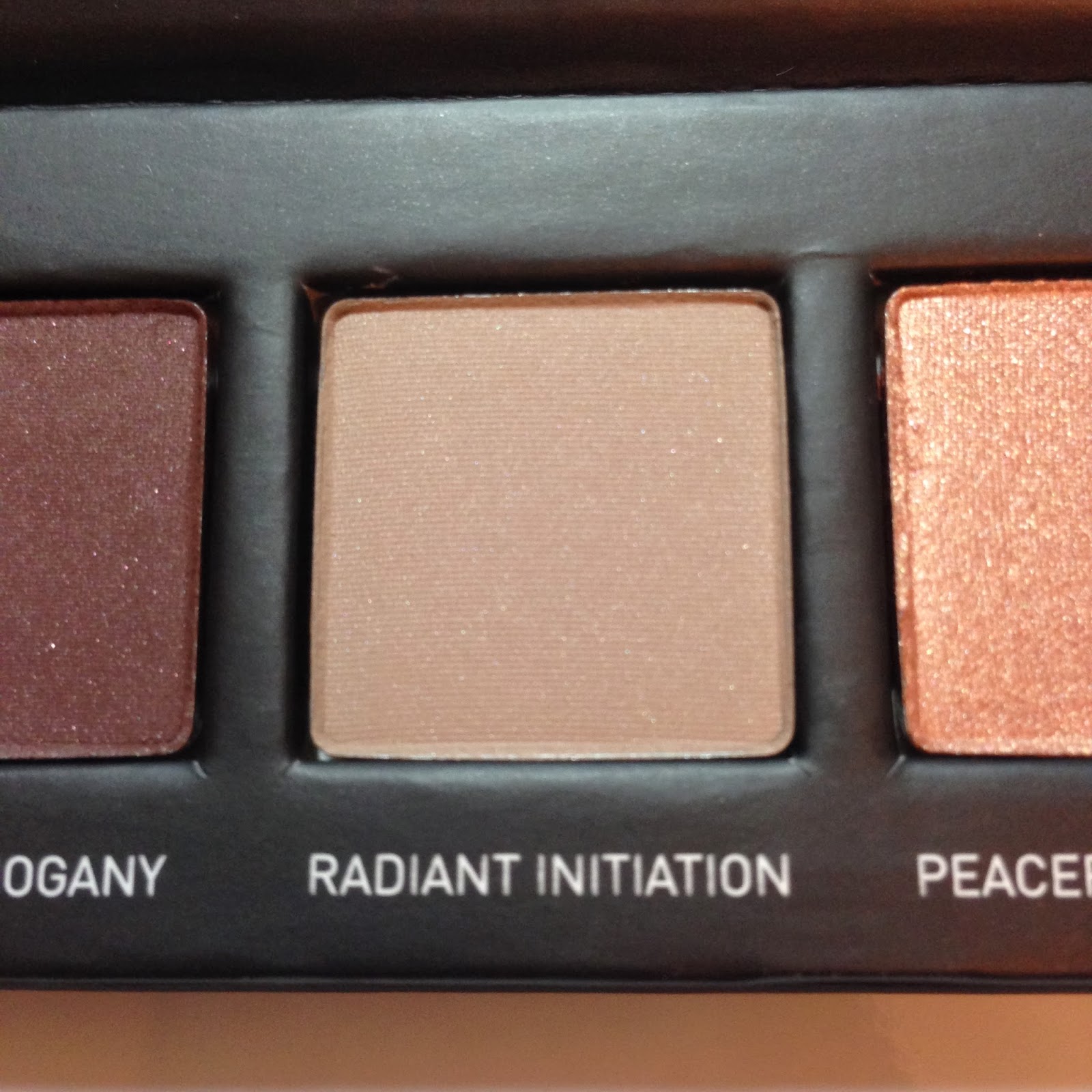 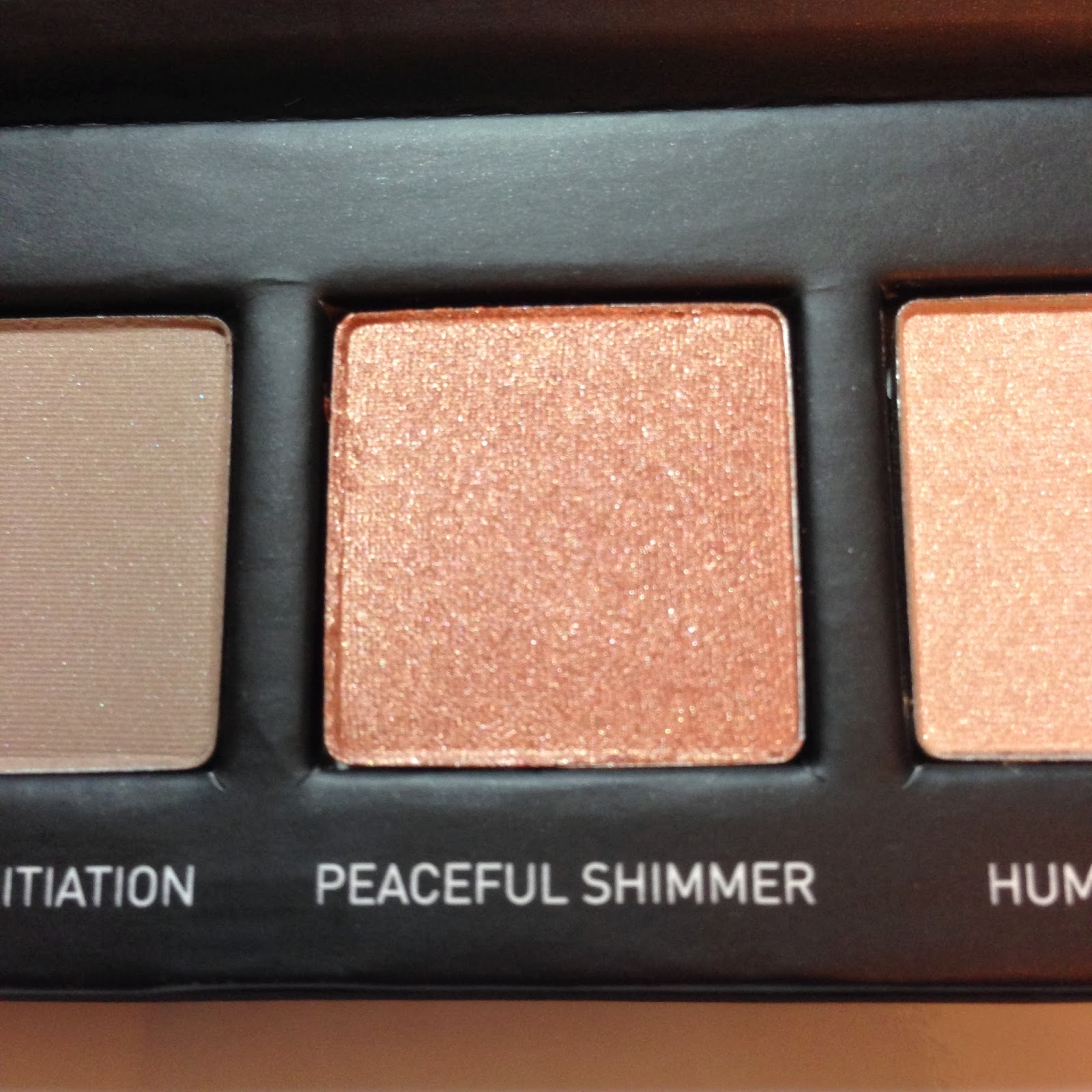 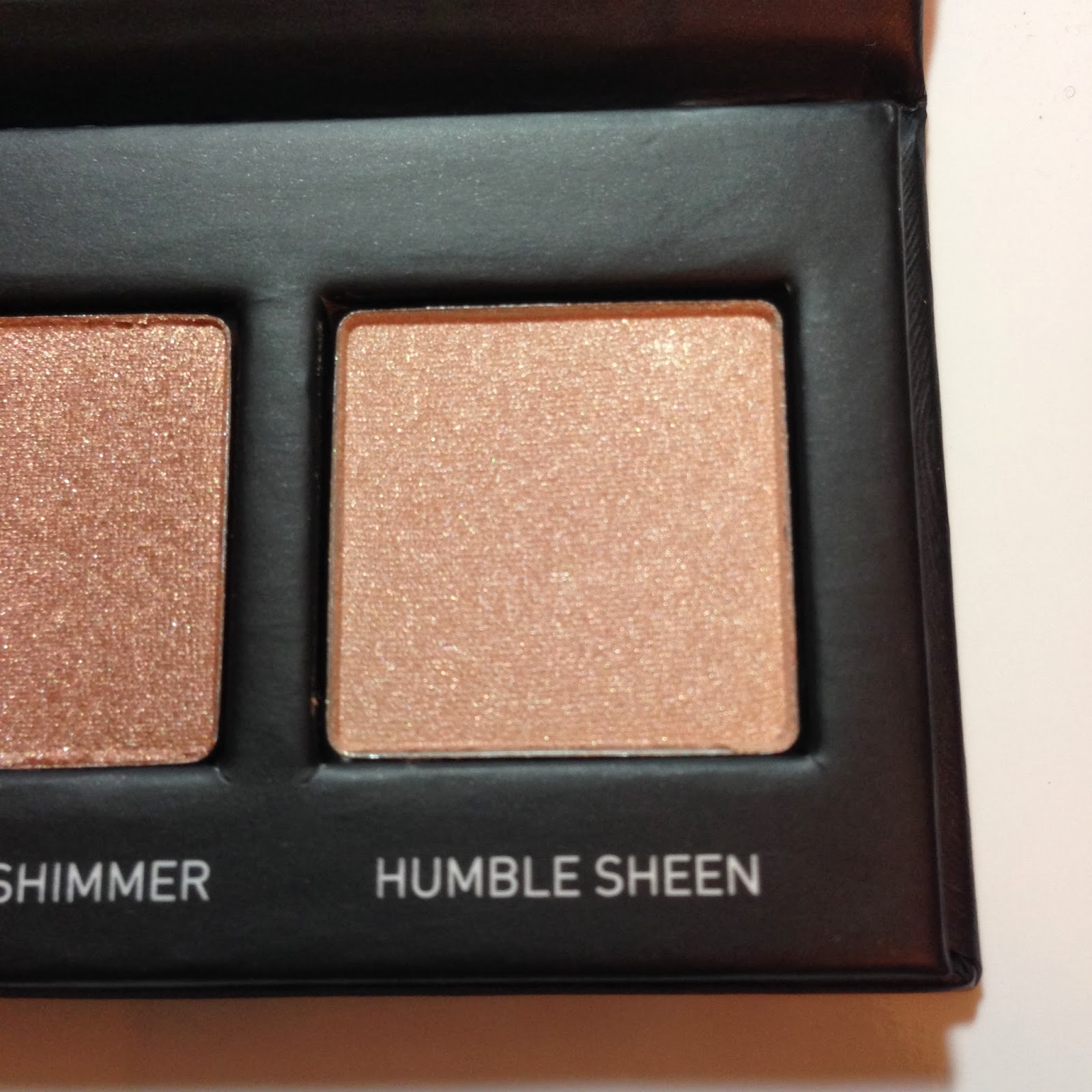 The Dauntless palette: Now THIS is what I expect to see from a Dauntless palette. And actually, this is the one palette where they got the faction colors nailed - Dauntless Ink is precisely that, Abnegation Stone is a gray/taupe, and Erudite Sapphire is a metallic navy. Serene Vanilla could conceivably represent Amity, which is the peaceful faction, and I'm sure Sephora thought red or yellow would be out of place, so creamy vanilla was a nice compromise. On the whole this palette is perfect for a dangerous smoky eye, which is what one would expect with Dauntless. 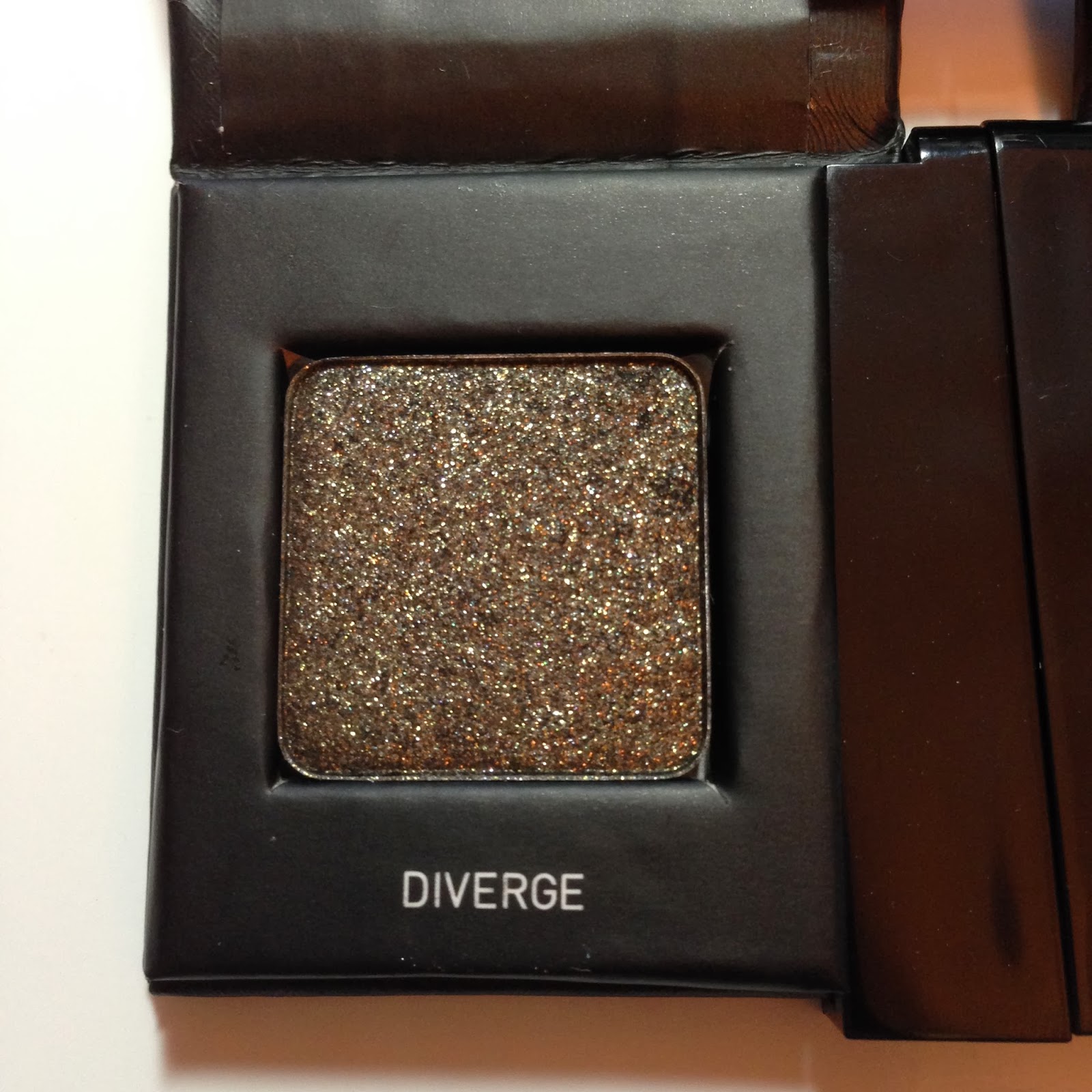 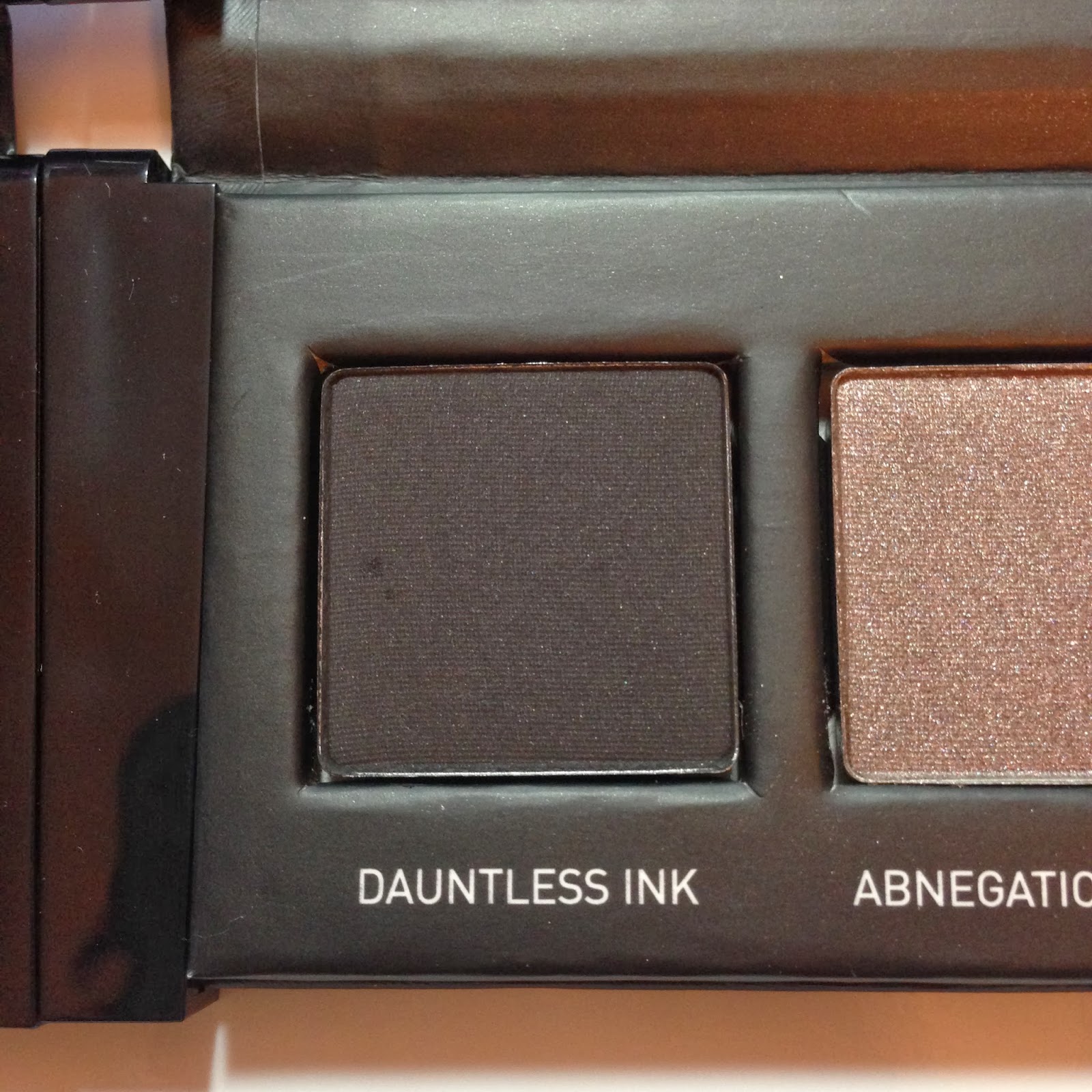 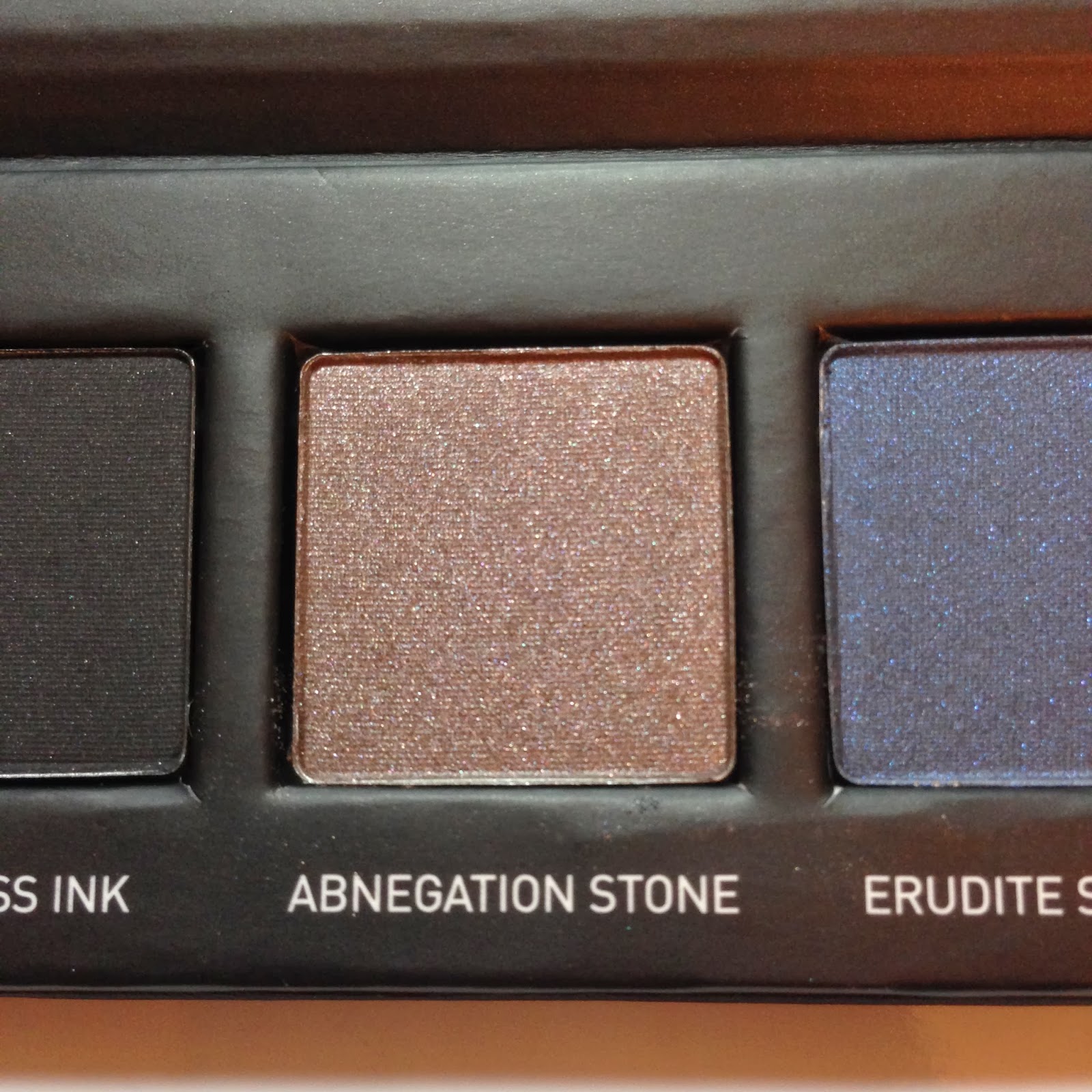 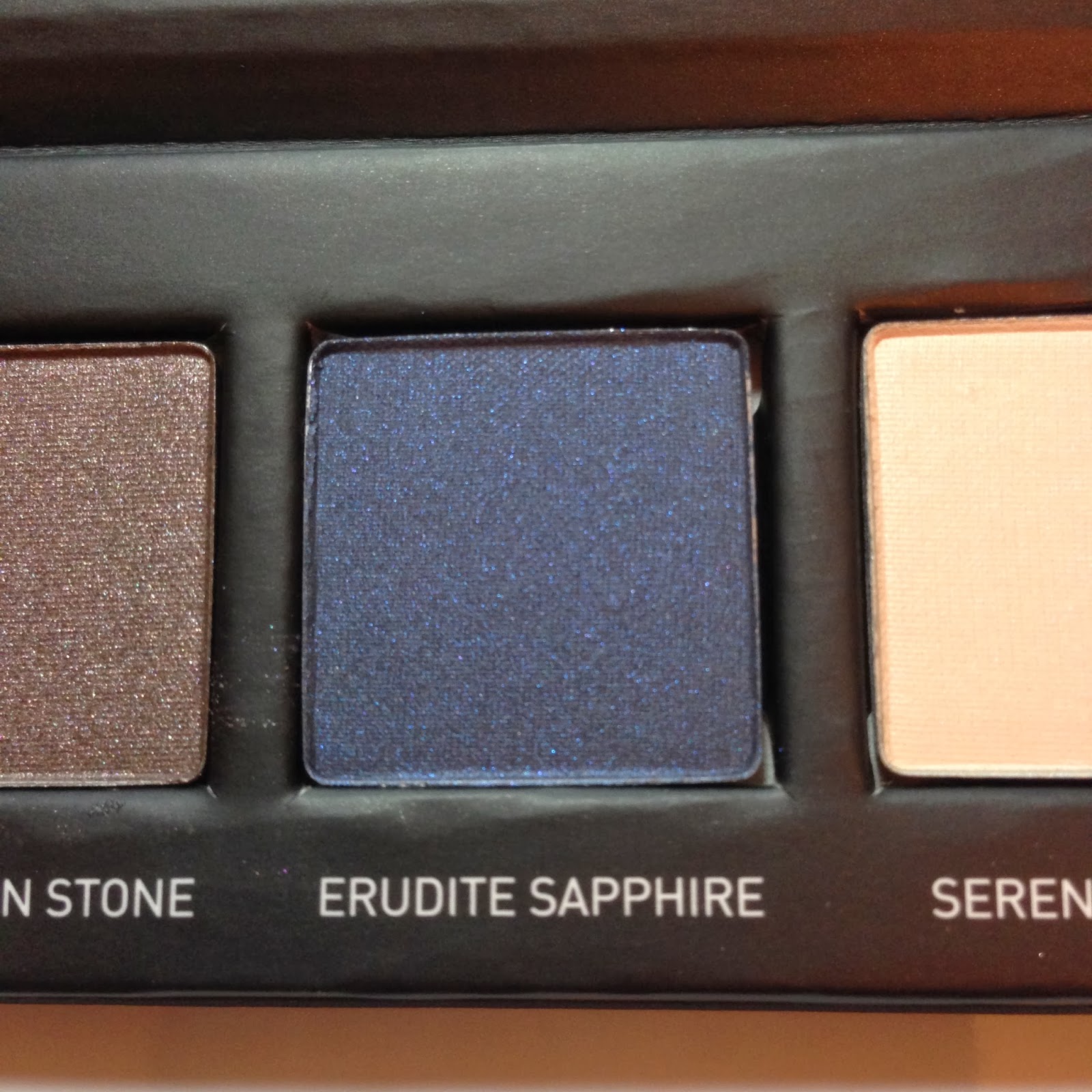 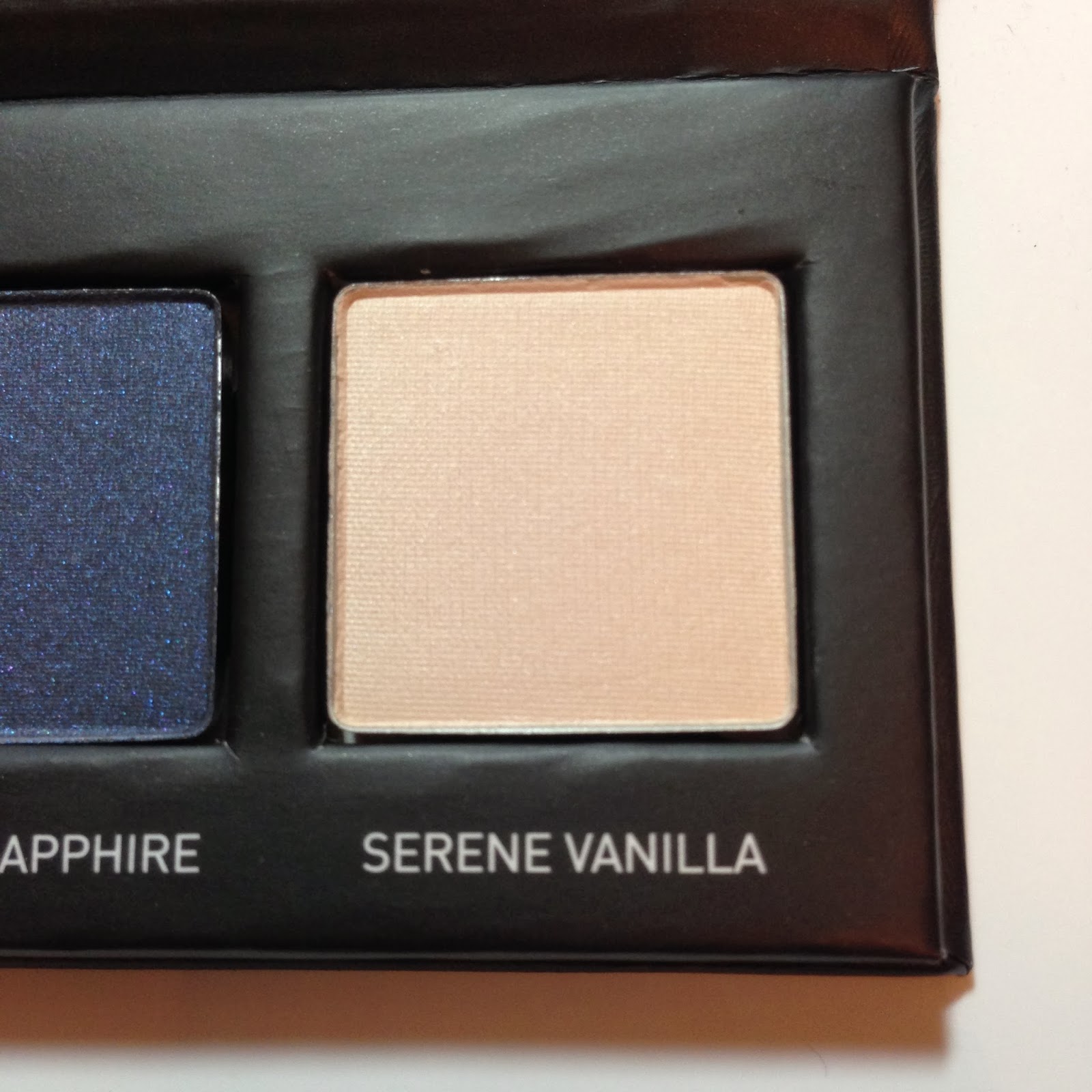 The Abnegation palette: Again, there shouldn't even BE an Abnegation palette, but that said, it's got colors conductive to a soft, natural look, and to be honest, this one appeals to me the most, and I can even see myself carrying this one around more than the others. Intrepid Moss is the "least neutral" shade in this one, and it's not particularly green. 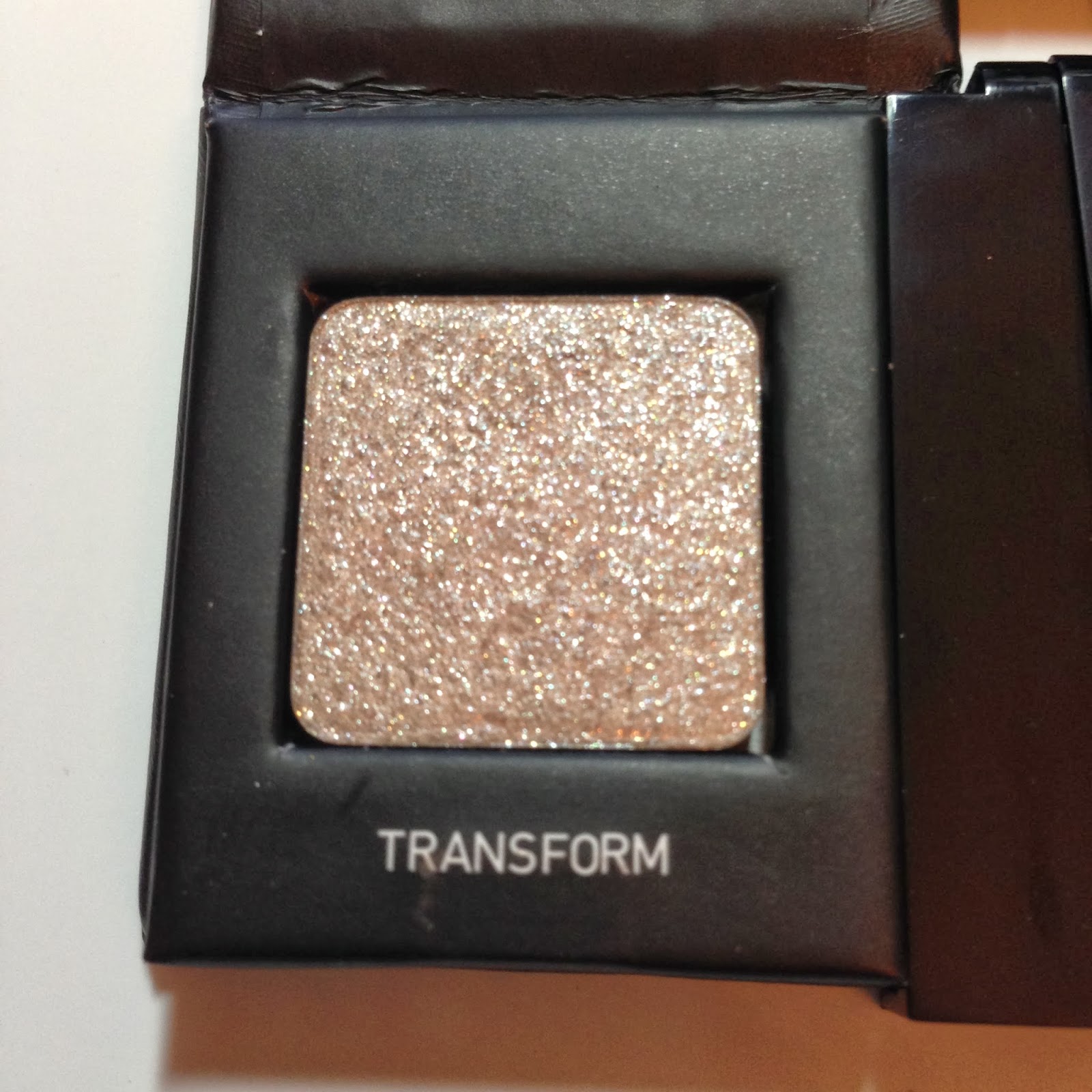 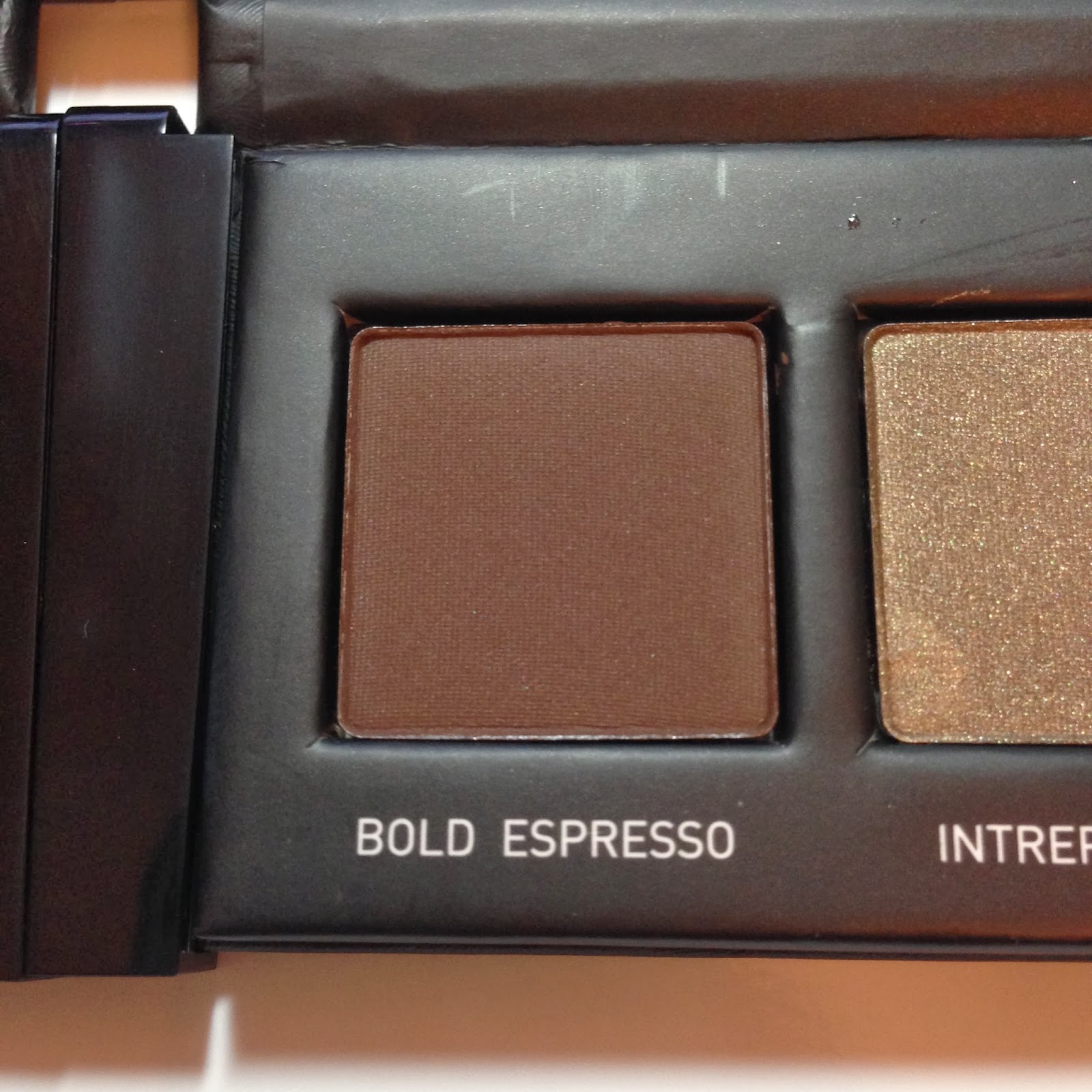 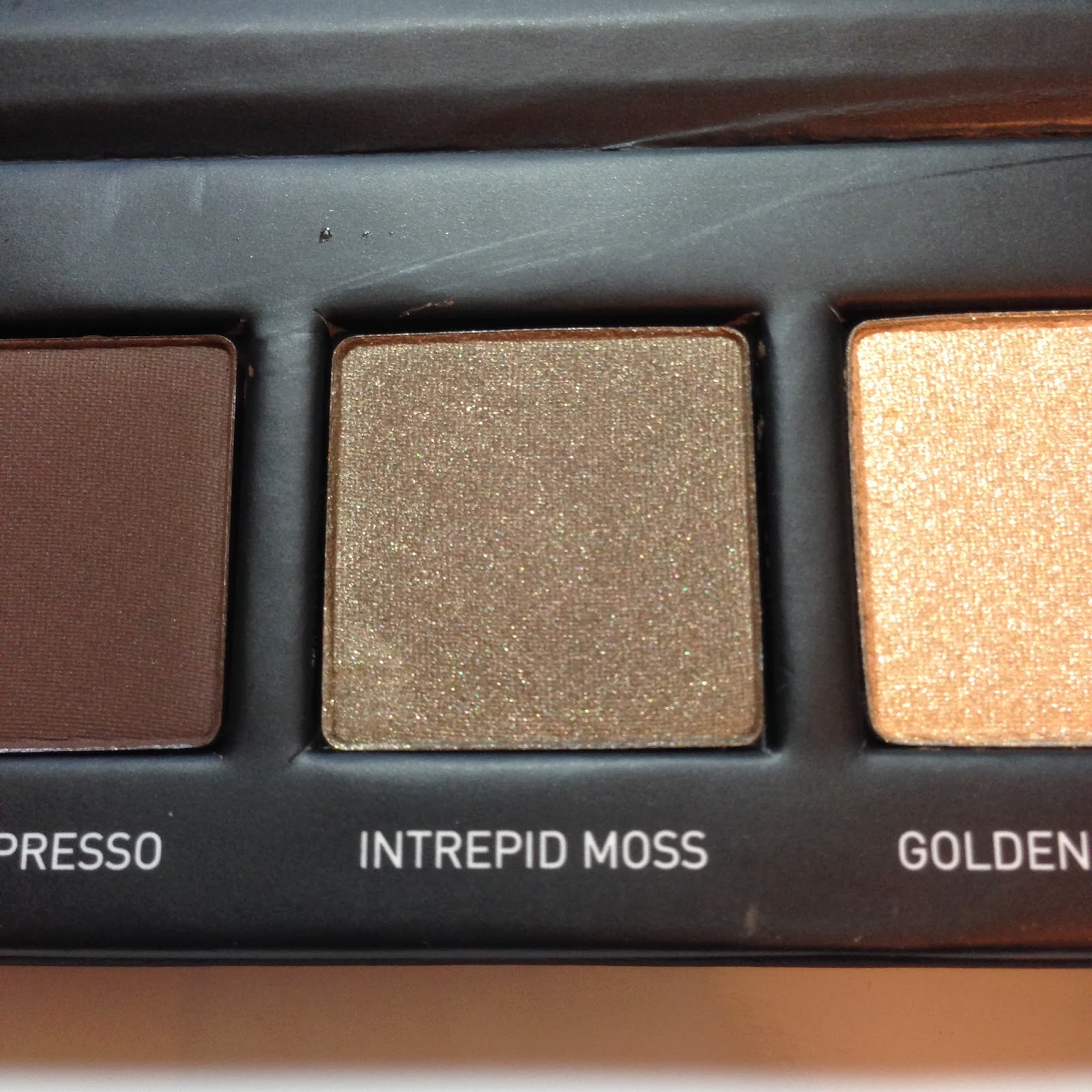 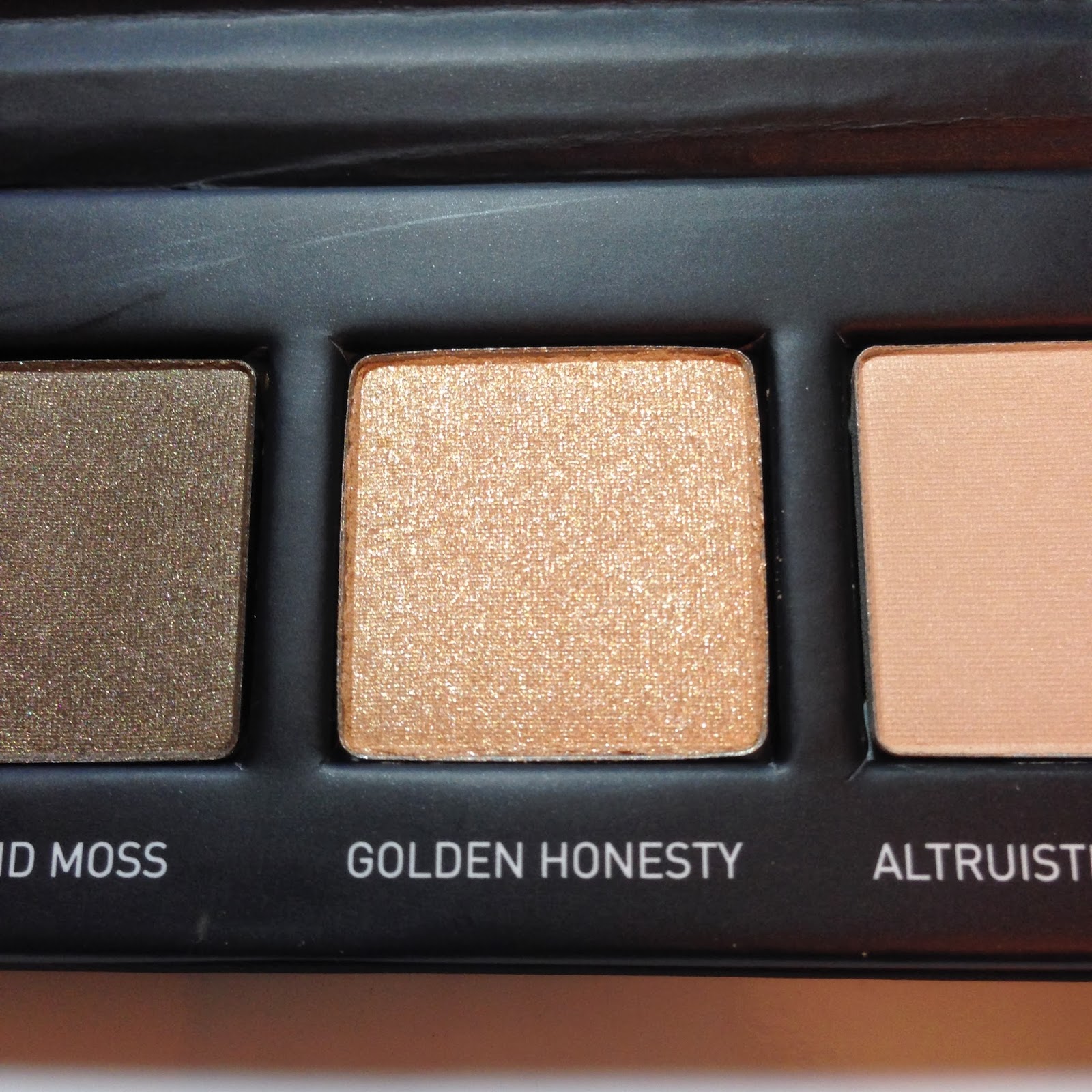 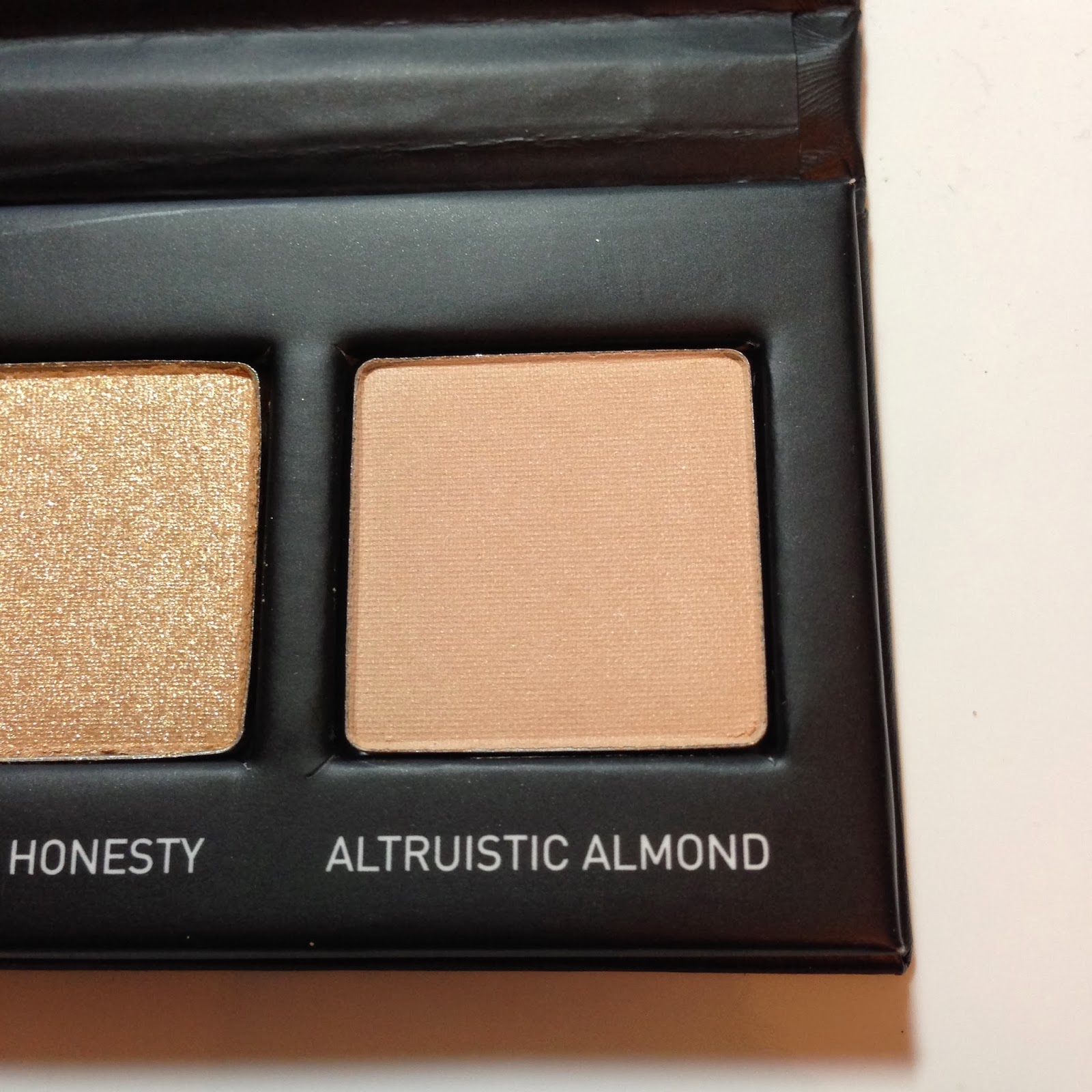 This is me wearing the Abnegation palette today, just to test it out, along with Misty Rose, Gleaming Pearl, and Intelligent Bronze and the lipgloss in Supreme Ritual:


Eyeliners are Stila and UD; mascara is Too Faced. I wish they'd added eyeliner. After all, Tris starts wearing black eyeliner all around her eyes after she joins Dauntless and it makes her striking.

Conclusions: This is an amazing set, with high quality stuff, from the cosmetics themselves to the packaging and presentation. I could eventually see myself tiring of all the separate palettes and just depotting all the shadows to a Z-Palette, but since it's still fresh and new to me and I plan to devote a few days to each palette, I'm cool with just carrying around each one individually.

If you'd like to see the day/night looks for each palette, they are available at the product link at the top of the post. I like how they gave the sample girl Tris' raven tattoos :)