April 09, 2014
As a female, I am constantly inundated with messages both subtle and overt about how my body is supposed to look. All the voices fighting for space inside my head become exhausting and even toxic.

Don't be fat, be thin; no, don't be thin, be strong; strong is the new skinny. Be strong, but don't be muscular. Work out like a man, but don't look like one; be feminine and pretty instead. Be a real woman. Real women have curves, but they should be boob-and-hip curves; they can't be curves of fat. Don't be fat.

And these expectations start early, right? As a girl, I was expected to be mild-mannered and well-behaved. I had a lot of dolls and art sets, but never any sports equipment (aside from a bike or skates). It's ingrained pretty early on that females are supposed to look a certain way and behave a certain way, and that deviating from the norm is baaaaad. And unfortunately for me, I was never "normal," EVER, if you take into consideration the fact that I can put on fat and muscle very easily.

It took me a really, really long time to start thinking of my body in terms of what it can do, rather than how it looks. The truth is, friends, that you are so much MORE than your looks. Your body is more than its appearance - it's a living, breathing machine that functions and IT CAN DO STUFF, pretty awesome stuff like (in my case) running marathons and playing roller derby and having a baby.

It's a uniquely female experience, being valued for your looks rather than your abilities and skills, and not in a good way. I'm not saying that men aren't judged by their appearance, but men are so rarely judged by ONLY that. Women are so often reduced to just their appearance, with beauty (someone else's standard of beauty) being emphasized to the extreme, to the point of devaluing physical and mental health, and that's what I've been tossing around in my head today - the fact that society really f***s us over when it comes to our bodies and our health.

Today I read this article (does it even DESERVE the categorization of "article"?) called "Is Spinning Making You Fat?", and it's so headshakingly stupid that it doesn't even deserve my anger. Essentially, it's cautioning readers against doing too much spinning lest it make your legs bigger:

Says celebrity trainer David Kirsch, "If you have a predisposition to bulking in your lower half, Spinning can make your butt and quads bigger." Adds Rebecca Battista, an associate professor of exercise science at Appalachian State University, "Those are the muscles you're using. Some cyclists get really big thighs."

I can understand if you're a model and you've hired your trainer to make sure that you maintain the physique you need to make a living (no matter how I feel about that particular physique being the standard), but this article is extremely problematic in that it categorizes being fat as a bad thing (but of course, how could we expect them to say otherwise? It's a fashion magazine), and that it equates being muscular with being fat.

If you're an avid spinner, your legs are getting bigger because of muscle, not fat. And the last time I checked, muscle is 1) not the same as fat, and 2) a good thing! If your body is responding to spinning by putting on muscle, you're doing it RIGHT. You're seeing results! But no, according to this article, muscular legs are BAD. One of the women named in the article stopped spinning "to let the muscles atrophy" to get her legs back to their nice, lean shape. That is a direct quote from the article - I'm not embellishing. The article cites a woman who was doing a great job at an activity she liked, but she gave it up and let her muscles atrophy because she wanted to meet a particular standard of female beauty rather than letting her body be its natural, strong self, and this magazine is condoning it. Let that sink in a minute. (I'll wait.)

Now put that article on the backburner, and check out this blog post: Women's difficulty with pullups is about more than biology, in which Camille of Fit and Feminist debunks the idea that women are just not meant to do pullups:

Few things have made me cringe in recent memory like the flood of commentary that greeted the Marine Corps’ revelation that 55 percent of its female recruits could not meet the new standard of three pull-ups when tested at the end of boot camp.

I’ve read one comment section on this story and that was plenty. I am pretty sure I’ve had enough “see? we told you women were genetically inferior weaklings suited only for making me a sandwich” bullshit to fill my tank well into the next decade.

All of the research she's read essentially proves that, with proper training, women can in fact do pullups. More than three, even! (And this is something I already knew because, hello, CrossFit!)

So what’s the big issue here? If women are capable of doing pull-ups, then why are so few of us actually able to do them?

Well, I tend to have the same line of thought whenever we talk about female physical strength, which is that we live in a culture that has glamorized and sexualized female weakness, and so any analysis about the physical limitations of female bodies has got to take that into consideration or else it is worthless. (This is the thesis of The Frailty Myth by Colette Dowling, by the way.)

Let that sink in along with the first article, and then put that on the backburner too.

Now: a few weeks ago, I watched the following clip of Mythbusters in which they try to debunk the concept of "throwing like a girl." Go ahead, watch it. It's good:


They tested males and females of four different age groups, and then decided to RE-test them, making them throw with their non-dominant arm because it was the only way to correct for the inherent cultural bias towards males - in general, boys are taught early on how to play catch ("playing catch is usually a boys' game") and they've had a lot more time, practice, and encouragement to do well at throwing and catching than girls. Of course there are always exceptions, but there's enough of a bias there that they had to account for it as a scientific variable, and once they did, they found that there isn't any profound difference between the way males and females "naturally" throw. Fancy that.

Women CAN do pullups, just like men can. Women CAN throw just as well as men.

Women CAN. But a lot of the time? We DON'T. Because so often we're told that we can't and we're told that we shouldn't. We're expected to exercise so that we're not fat, but not so much that we become strong. Women in our society who are strong and muscular are considered manly and unfeminine and subject to questions about their sexuality. And then we're told by people who are eager to preserve the male position of privilege that men are MEANT to be the dominant ones, that historically they're the hunters and providers and women are the fairer sex and meant to support the men, and then you have all the people who are insistent that Chloie Jonsson not be allowed to compete against other women even though she is mentally, physically, emotionally, legally a woman, because of some misguided belief that all the other women in CrossFit can't stack up to her just because she happened to have male parts when she was born, even though there are plenty of cis women in CrossFit who could obliterate a large portion of the the cis male competitors as well as Chloie herself.

So let's not accept this BS, okay? Let's NOT let our muscles atrophy - let's build them up even stronger. Let's be our best selves, whatever that means for you and your body. We are trying to fight back from under an enormous weight - let's not add more to our burden. As the quote goes, "Well-behaved women rarely make history." So let's make history and keep chipping away at the status quo.

And let's continue to rock the booty shorts. Because I worked hard for my bulging thighs, dammit. 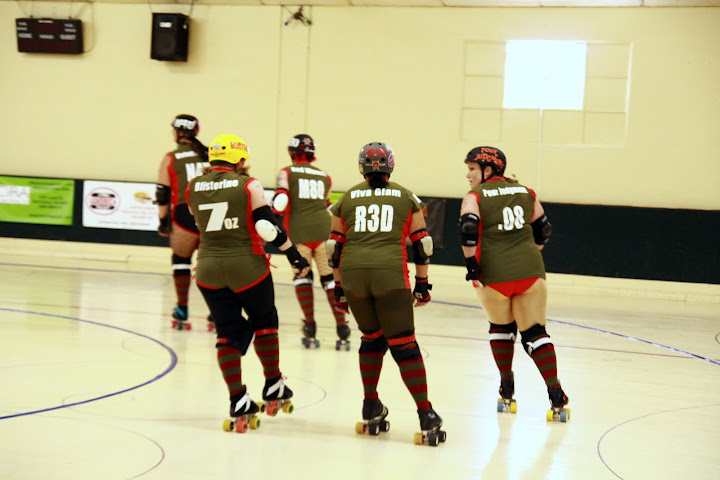 Maybe my brain is broadcasting on some universe-wide frequency, or maybe I'm just incredibly consistent in my choice of Internet browsing, but since writing this blog post, two more things popped up on my radar that go along with what I've been saying here.

1. This is an old blog post (from 2006), but I just saw it for the first time yesterday. I think this quote sums it up rather well:

2. And this video from Hank Green (vlogbrothers) was just posted today (Friday),

in which Hank addresses his concern about how, in our society, so many females measure their self-worth by how attractive males find them, and in typical Green brother styles, he recaps all these various historical standards of beauty with the point of demonstrating how arbitrary beauty (physical beauty) really is. "You exist for your sake!" he says, not for anyone else.

So, unless it's your job (in which case, I have no advice for you), you don't owe it to anyone but yourself to "look good." And even then, don't you owe it to yourself more to be happy and healthy (again, whatever "healthy" is for you personally), and to make your own decisions about your appearance rather than letting society dictate that for you?