June 14, 2014
Now that it's summer vacation, I've got a lot more free time on my hands to read (as opposed to "time I should be doing something else, but I'm going to read instead anyway"). I have a pretty lengthy to-read list, but I sat down and narrowed it down to these, and I'm hoping to blog as many of them as I can along the way. Of course, I will end up adding more, I'm sure - I'm always getting book recommendations left and right.

The reviews below are spoiler-free.

First up is Fangirl by Rainbow Rowell. I had read Eleanor & Park earlier this year and thought it was just AMAZING, and this book has been on my radar a while as well, so I really wanted this to be my first read for summer.

Short summary: Cath and Wren are twins who've just moved away to college for the first time. Wren is the one who cuts her hair short and suggests living separately, throwing herself into college life and frat parties with aplomb. Cath is a popular fanfiction writer for a Harry Potter-like series, and the fandom is her haven to which she retreats when the pressures of college life and feeling abandoned start to be too much.

It sounds silly and happy (because that's what you think of when you think of fangirls, right?), but in true Rainbow Rowell fashion, there are parts of this book that will break your heart. Cath isn't just a fangirl for no reason - it's her coping mechanism, just like drinking is Wren's, and the issues they are dealing with go much deeper than having to deal with strange roommates and drunk college guys.

Cath is sensitive and cynical, and the chapters that are her stories are interlaced with excerpts from Simon Snow books and fanfic (which, of course, Rowell wrote herself). I love the dynamic between her and roommate Reagan, and of course, the love story is real and adorable - Levi is charming and gentlemanly, but he also makes mistakes, and I appreciate that. This book definitely made me cry in certain parts - at some point, I shook my fist at the sky and said, "OF COURSE Rainbow Rowell would upset me with this book too!" - but it ends on a positive note, and I definitely saw a lot of myself in Cath - me at that age, and me as I am now. I really liked this book, and I've decided that I will now pretty much read anything else Rainbow Rowell writes - FAN FOR LIFE. Her other two books have been added to my list. 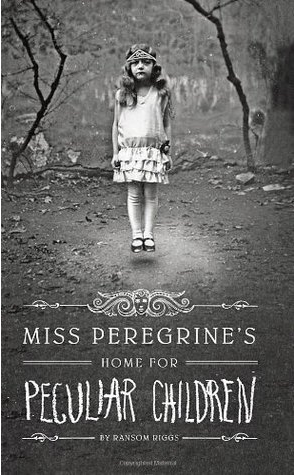 For a complete change of pace, I then decided to read Ransom Riggs' Miss Peregrine's Home for Peculiar Children. As with many others, I was drawn to its creepy cover, and as it turns out, Riggs used a bunch of vintage found photos to shape the story. I then decided to buy the book in hardback because I liked the idea of physically turning the page and being able to touch the photos in paper form. This book has been on my list a while (I even already have the sequel, Hollow City, even though I hadn't read the first book yet), and I was glad to be able to finally get around to it.

Short summary: Jacob has spent his whole life listening to his grandfather's stories about the children's home he escaped to at the beginning of WWII. Each story is more fantastical than the last - his grandfather would talk about fighting monsters and then he would pull out his old photos featuring the strange children he grew up with - an invisible boy, a girl who can levitate. Jacob stopped believing the stories eventually, but when Jacob actually SEES the horrific, tentacle-mouthed monster that actually eviscerates his grandfather, he decides to honor his dying wish and seek out the children's home on a remote island in Wales...

Again, Riggs incorporates vintage found photos into the narrative (he's also a photographer himself), and these photos are pretty eerie. I'm not sure to what extent they were doctored (either originally or for the story), but they are absolutely fascinating, making each page turn exciting. As you can probably imagine, there are moments that made my heart pound and there are moments that made my skin crawl. As you might not have imagined, there are parts that are also rather touching - at one point, Jacob reflects on the lineage of emotional trauma inflicted by the Nazi persecution of Jews, and how the fact that his grandfather had been hunted by people he didn't know led to the emotional estrangement between his father and grandfather and his father's feelings of inadequacy, which in turn led to Jacob's own emotional turmoil and the fact that he's now seeing a psychiatrist about his nightmares.

There are some moments where I side-eyed a little bit (like how he treats his father, but I know not everyone has a good relationship with their parents), but overall, it was a really entertaining read. I'm probably not going to jump into the sequel right away, but I am looking forward to it.