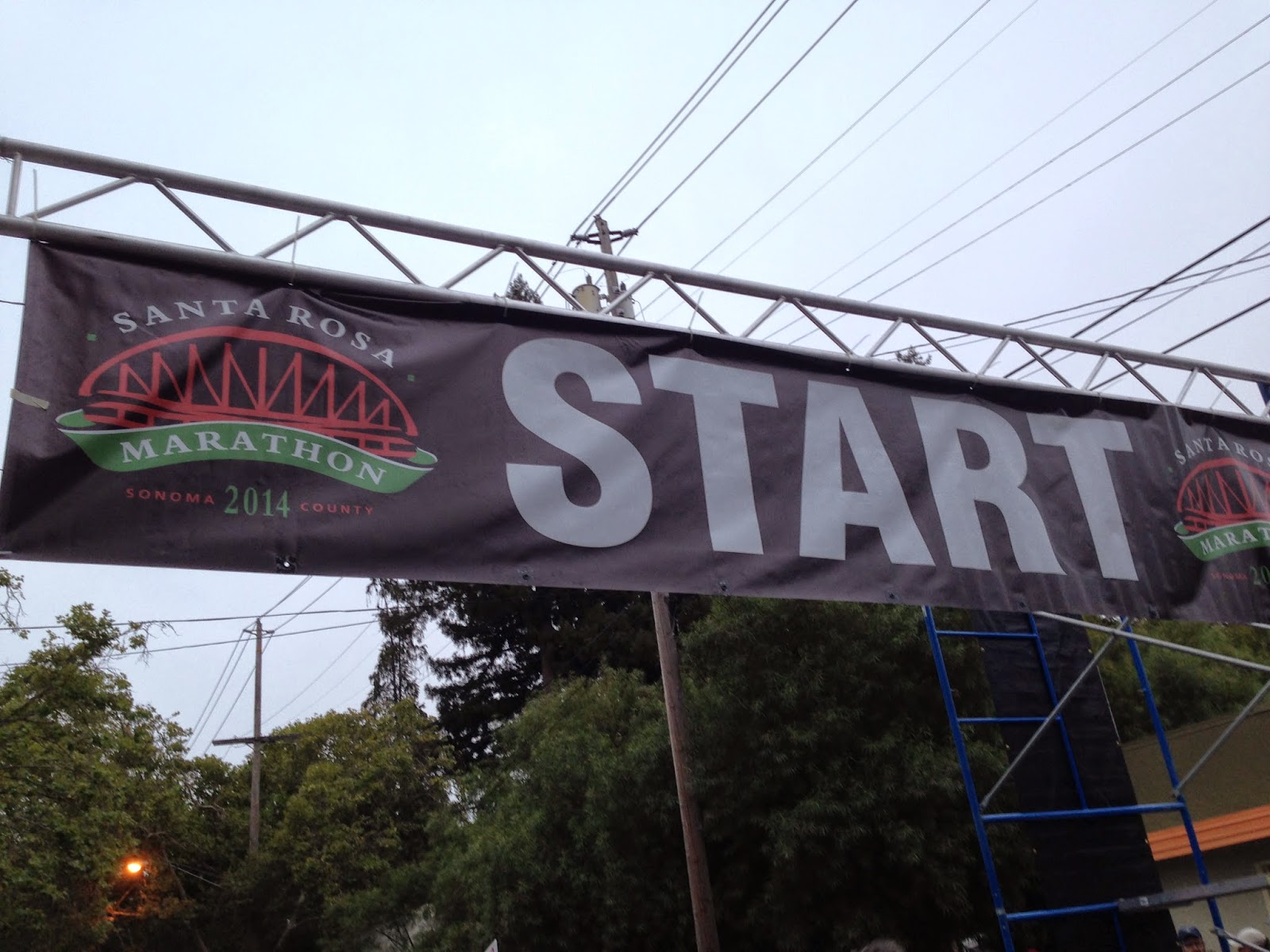 Kind of a crazy day!

As the rest of the internet can attest, there was a 6.0 earthquake at 3:20 in the morning, and its epicenter was in Napa, which wasn't too far from where my coworkers and I were in Santa Rosa, so we really felt it. My hotel bed was shaking like in The Exorcist.

I was already having trouble sleeping (I don't really sleep well in hotels, especially before races), and I was pretty much wide awake after the earthquake, managing to ALMOST doze off before my alarm finally went off at 4:50am.

A group of us former and current MHS teachers signed up to run this together, and for various reasons (including the earthquake!) there ended up being only four of us at the start line. It's my first race since the SJR Half in June and my first race since getting seriously back into fitness (running and Crossfit) and losing a little weight (which matters only in that it means I can run faster), so I had high hopes that I would do pretty well on this one. Technically, I was only supposed to run eight miles today (training for CIM), but I cut out a weekday run to balance out the mileage, and told myself that I just had to hang in there for eight miles and then I could ease up.

I felt really strong! My overall pace, which includes the walk breaks, was actually sub-13:00 for the first half, which is even faster than my weekday runs (although, I do those on the treadmill, and I just kind of pick the same run speed every time, for simplicity). I only just started doing 3/1 intervals this week just to see if I could (I could!), so the longest I've run at that interval has been three miles (since my last long run was done at 3/2). I felt powerful and happy, and I really enjoyed those first nine miles thanks to that and to the beautiful scenery of the race course. (The sky was overcast the entire time, pretty much, which was nice.)

Of course, that didn't last forever. I managed to maintain my interval for NINE miles, and I think I could've gone further if my head hadn't started to hurt and if my right leg (calf and butt) hadn't started cramping/seizing up. It wasn't that I was tired (which was nuts, considering how I woke up before 3:30), but that my body was acting up a bit, so I eked out some sort of 1/1 or 1:30/1 interval for most of the rest of the way. (And THEN I got tired, especially for the last two miles.)

I still managed to run the last quarter mile (spurred on by some Resurrection Roller Girls, who came out to cheer!) and finished in 3:05:41 (official), which is not fast and not my best time, but is my best time since June 2013, so I'm still really happy about it because I feel like I'm back on track with my running.

Next up: October, San Jose Rock 'n' Roll. I'm DOING it this time. (Last year I missed it due to my knee injury.) 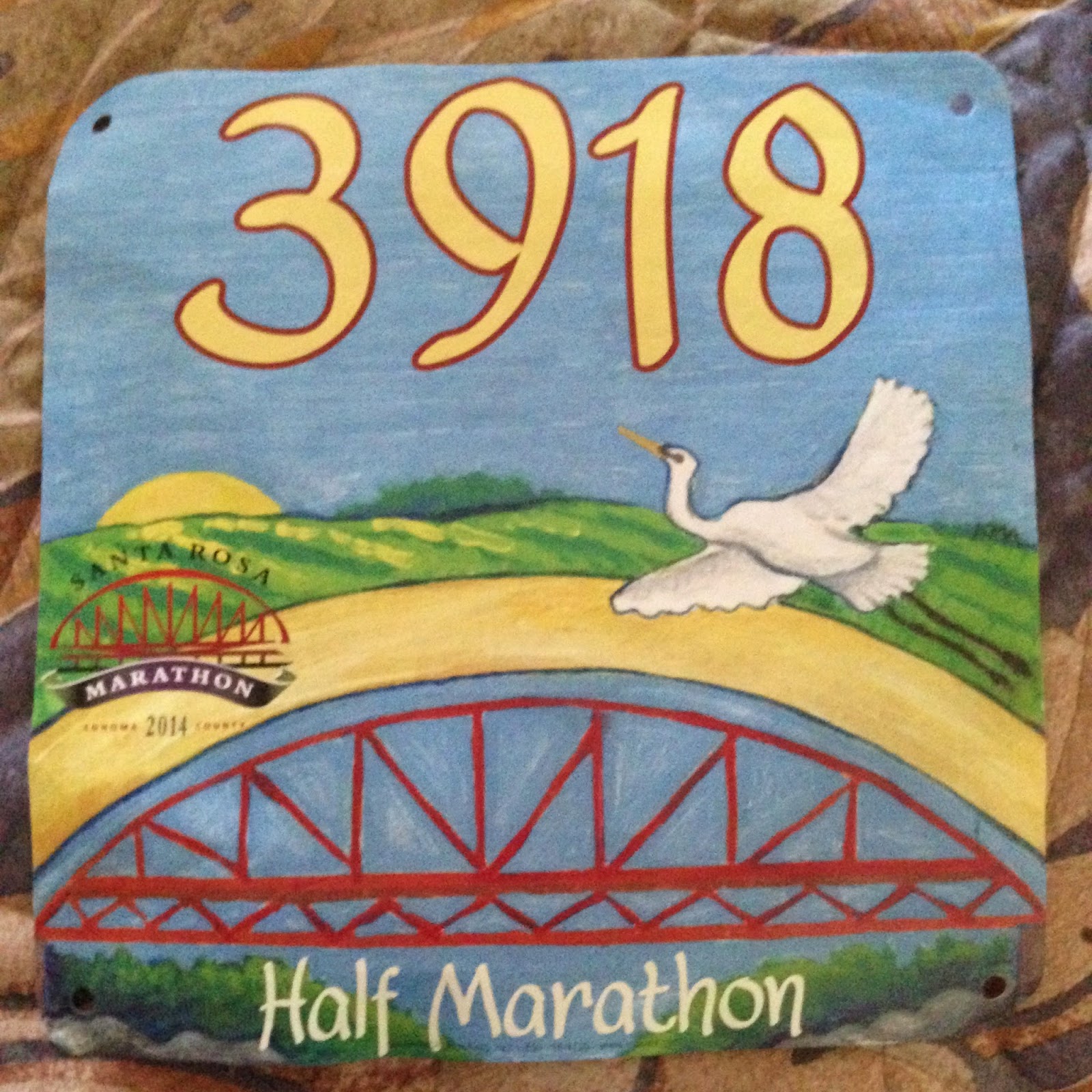 Beautiful bibs this year. The full marathon bib had the winery on it. 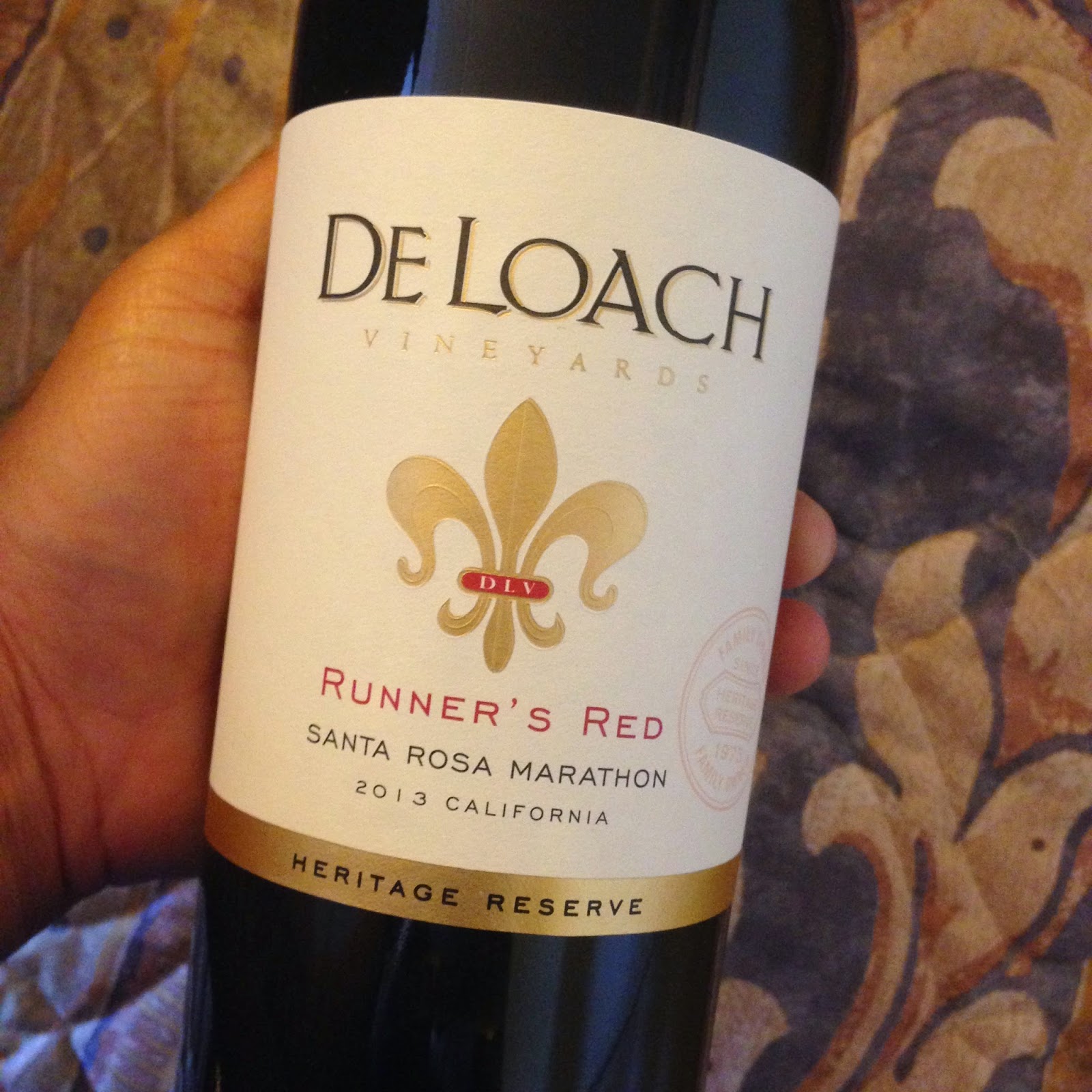 They didn't have the jackets ready for the expo, so they gave everyone long-sleeved techy shirts, and then happened to be able to hand out jackets post-race. They were sweatshirt hoodies this time instead of windbreaker jackets like last year: 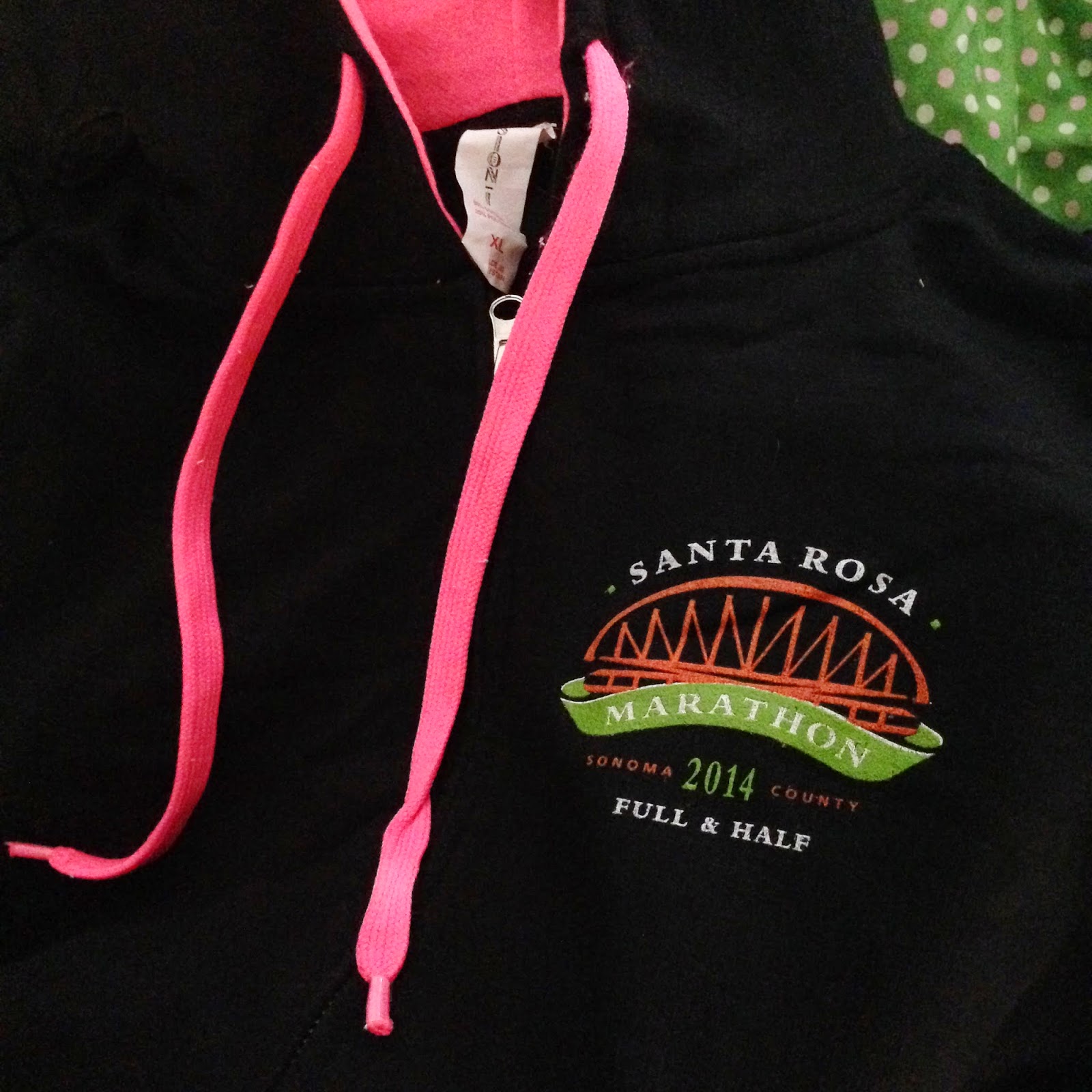 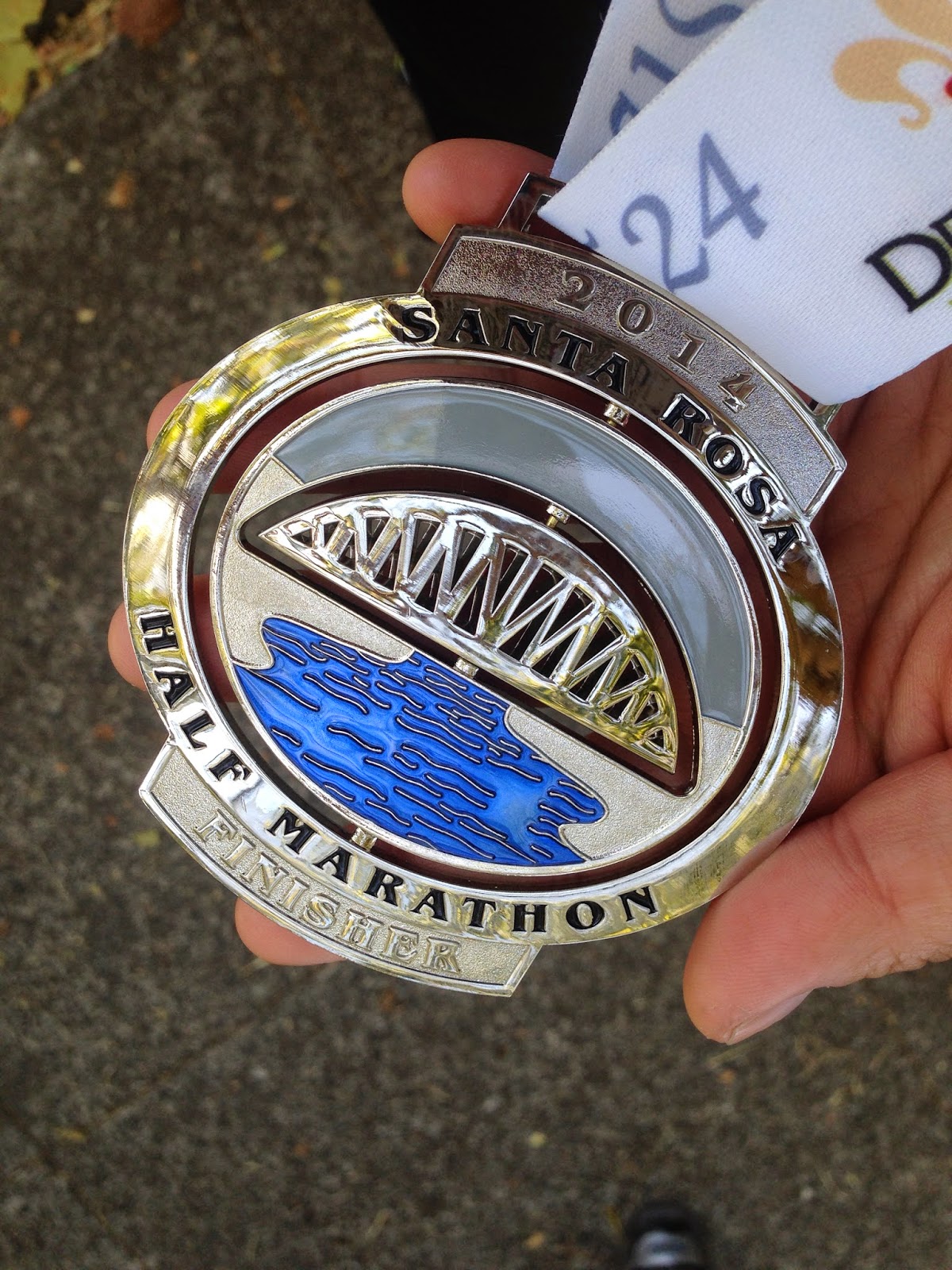