October 05, 2014
My brain is feeling pretty fried right now, but the recap must be written!

I've never done an RnR race before, but I've known about the series for a long time and have had a couple missed opportunities, so I was determined to run it this year, and it was a lovely coincidence that this race happened to fall on the weekend that I was supposed to do a 14-mile training run. I figured, I could run the slightly-shorter distance but increase the pace a wee bit.

The good: My legs felt great. Well, my calves were a little tight for the first couple of miles, which doesn't usually happen on my training runs, but it wasn't enough to be really painful or cause any alarm. I ran it out and started finding my stride after that.

My legs never got tired. I know that sounds insane, but my legs felt strong the ENTIRE race. Usually they start to feel like brick by mile 9 or 10 and I have to do a sort of shuffle-limp through my run portions (or stop running entirely), which was what happened at Santa Rosa, by the way. Funny what consistent training can do, right? ;)

The bad: The heat was excruciating. I have been doing my weekday runs on my treadmill in my hot garage, so it wasn't as bad as it COULD have been, but it was still pretty bad - there were so many portions of the course that were run facing the sun, and by mile 9 or 10, my head was throbbing painfully and I was really dizzy - like, scary dizzy. I've never been a big fan of running in the heat, and even though I'm in much better shape for it than I have been in the past, this was still just unbearable. It was a strange paradox for me, to know that my legs were still holding strong at mile 12, but I couldn't let myself stick to my intervals because I was seriously afraid of passing out.

Luckily, though, the race people handled it really well. There was LOTS of water available at the aid stations, and at one point they also handed out icy-cold sponges, which I was so grateful for - I had taken to pouring water on my head to cool off (not wasting it - it was the remainder of the water in the cup that I didn't drink), but I would warm up again so quickly that it was hard for me to make all my run intervals. There were also volunteers armed with hoses to spray us down, and for most of the race, I resisted it because I didn't want to run in wet clothing (hello, chafing), but I finally gave in to temptation at the last water station, and the huge blast of unexpectedly-cold water (so cold, I gasped) ended up cooling me down enough to make the rest of my run intervals until the end. (That's how I know my legs were fine - because once I was able to really cool down, I felt GREAT.) 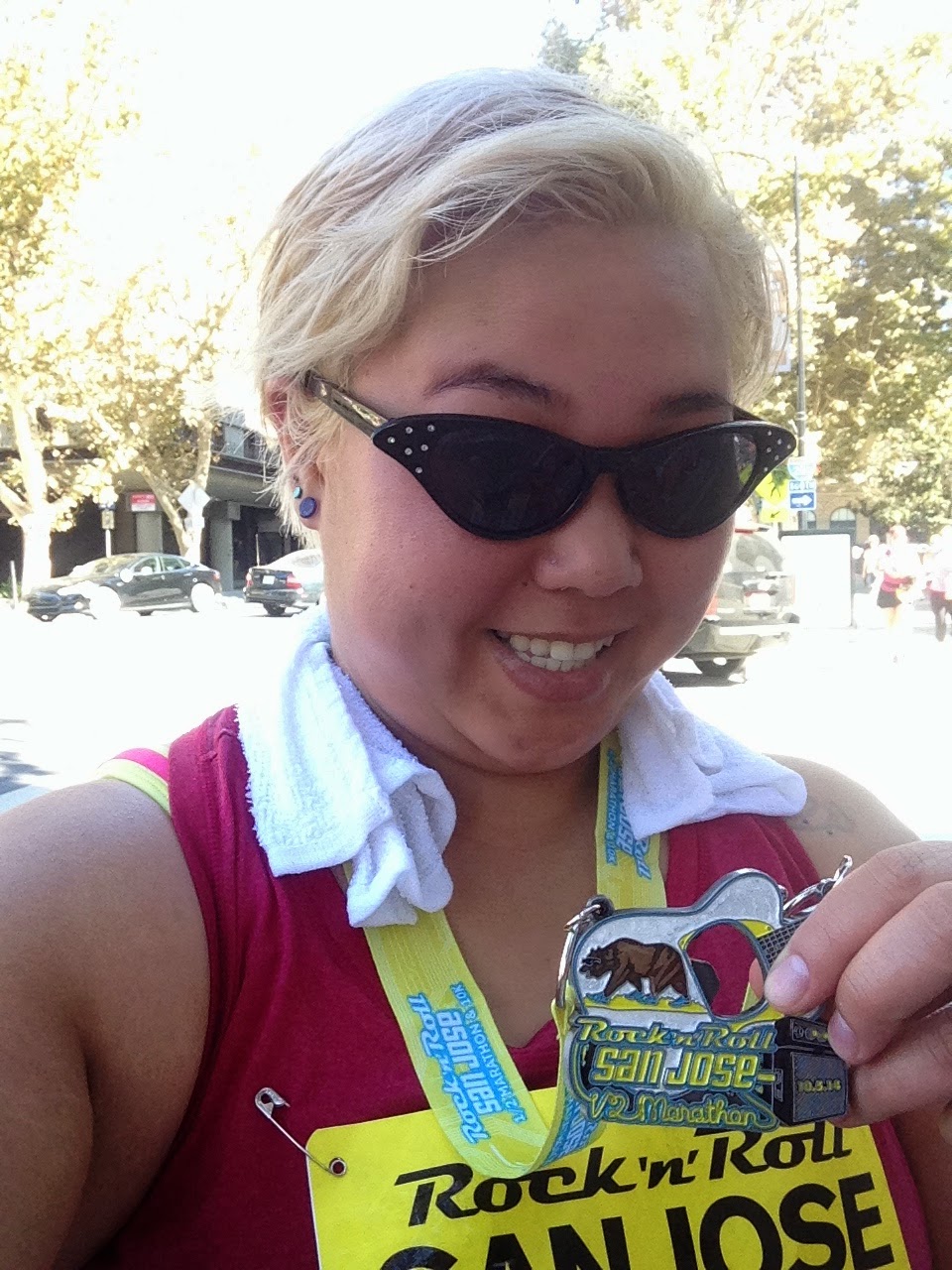 So yeah. Despite the heat, I actually made my goal time, which was "anything under 3:00," and low and behold, I finished in 2:57:56. Still not a PR, but a "season best," as we used to say in swimming. I haven't gone under 3:00 since the last time I PRed in May 2013, actually, so this is a huge accomplishment for me, and I'm very proud of it (although I will assert that if the temperatures had been more to my liking, I could've shaved off some more time). By the way, my 5k split was 7 seconds faster than the 5k I ran in May (and that was WITH a long-ish line at the porta-potties).

This bodes well. I am just about halfway through marathon training right now, and as long as I keep putting in the work, I should be all set for CIM.

Major shout-outs to my current and former co-workers who ran this one with me, some of them running this distance for the first time :)

Next race: Mermaid San Francisco Sirena 10-miler. I just realized that I don't have another half marathon until January. Which makes me kinda sad, actually.

Okay, now for some pictures.