November 09, 2014
This past week was my first "off" week since maybe early September. Going into the race today, I'd only run four miles (though, I was coming off a 28-mile week). For various reasons, I was just really off my game this week.

But still, I was excited to run this. I did the inaugural Sirena 10-miler last year with my knee injury, and though I enjoyed the race anyway, it definitely wasn't a great performance. I was looking to redeem myself today, even with being off my game.

I woke up at 4:30am, which is not so different from my weekday runs, except getting up early to DRIVE feels way worse than getting up to run. I know that sounds weird, but seriously, once you start running, your body wakes up.

It was surprisingly not very cold when we got there. The last couple of weeks, my long runs in Los Gatos were 48 degrees at the start, and by general rule of thumb, San Francisco is colder than the South Bay, so imagine my surprise when I was fine with just my short-sleeve shirt (that I even had to roll up to make a makeshift tank top halfway through).

The first three miles for me were actually literally painful - I was limping-running. There are a few reasons for this that I can tell:

- I hadn't run since Wednesday
- I had two hamstring-heavy strength sessions this week
- My right shoelace was rather loose, which gave me killer shin pain (but was quickly and easily remedied), and
- (Probably the biggest reason) I finished my first mile in 12:15. This includes two minutes of walking and the slow slog through the starting chute, btw.

That last one, seriously! I went out way too fast. I didn't even realize how fast I was going - I just ran. But considering the first three reasons and the fact that my legs take at least two miles to warm up anyway, I should've known better and forced myself to slow down, even if I already thought I was going slow (which I wasn't).

So mile 1 was flat and straight, but miles 2 and 3 are the WORST. They're the two BIG hill miles, to get you up to the bridge, and considering how I was already in pain, I pretty much had to walk those, both up and down the hills. But it gave me a chance to warm up and gently work through the pain, and by the time I got up to the bridge, I was golden ;)

Too bad the bridge itself wasn't. Golden, I mean. It was quite shrouded in fog for almost the whole way. This is GREAT for running - it kept me cool and it kept me from seeing too far ahead of me (and stressing over how much further I had to go) - but it was not so great for trying to see the spectacular views (which, let's face it, why ELSE would sign up to run the Golden Gate Bridge?) But like I said, it made for great running conditions, and aside from worrying about slipping on the wet ground, I ran my BEST paces I've ever run in TWO YEARS (since the 2012 Mermaid SF, when I PRed my 5k time). At one point, I think I ran three consecutive miles at around an 11:40 pace, and I think at some other point, I actually ran an entire mile in 11:05 (or so says my Garmin). Again, keep in mind that this is my overall pace, and that I was running a 4/1 interval, so my running parts must have been faaaaaaaast. We ran up one side of the bridge, had to walk down stairs to cross under it, and then had to walk up stairs to get onto the other side. Stairs, Mermaid Series? REALLY?

It wasn't all gray, though. Once I reached the halfway mark, at Vista Point, the fog suddenly ended and we were bathed in sunlight. I could not resist getting out my phone for some pictures, because how often am I ever on the north side of the Golden Gate? 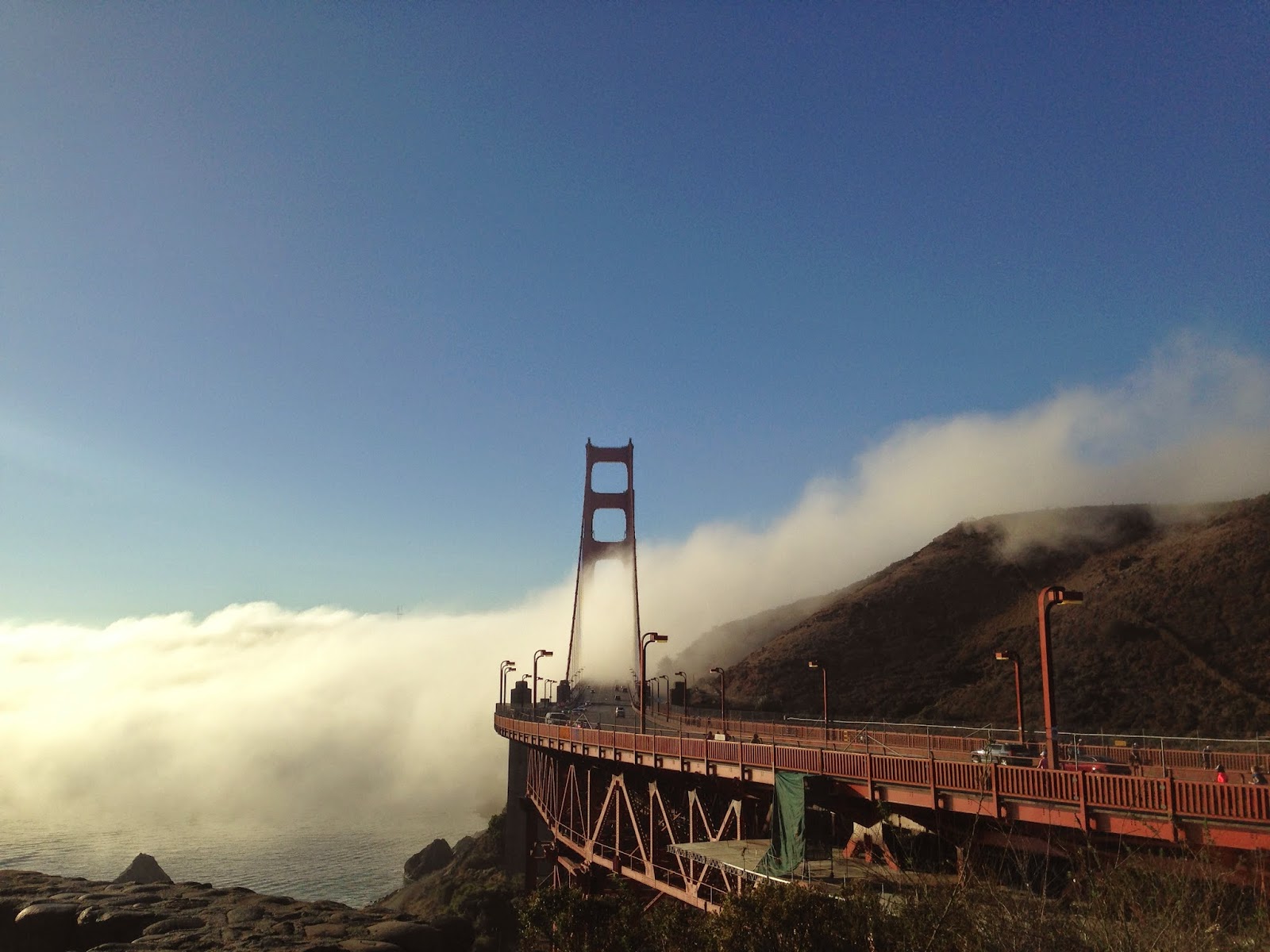 So, miles 4-7 take you up the bridge and back, mile 8 takes you gradually down hills and around Fort Point, and then miles 9 and 10 take you on the dirt/sand path to the finish. Those last two miles are pretty difficult because of the dirt, and because it just feels interminable.

I finished in 2:10:00 flat (I love when I get even numbers!), which was my goal time anyway, and this is pretty remarkable because I did the first three miles in 45:00 and the remaining seven miles in 1:25:00. So my average pace for the first three miles was 15:00, and my average pace for the remaining seven, after I was pain-free and sufficiently warmed-up, was 12:08, which is pretty darn fast for me, considering (again) that I do run/walk intervals. So yeah, at one point in this race, I ran a 17:58 mile, and at another point, I ran an 11:05 mile. Hills, man.

So yeah, despite the first three miles, I'm really happy with how I did today, and considering how my time last year was 2:47:33, I would say that I redeemed myself BIG TIME today.

Next on deck: THE CALIFORNIA INTERNATIONAL MARATHON, ON MY 32ND BIRTHDAY. We are less than a month away. Next week's Sunday run is the dreaded 20-miler, and then... we taper.