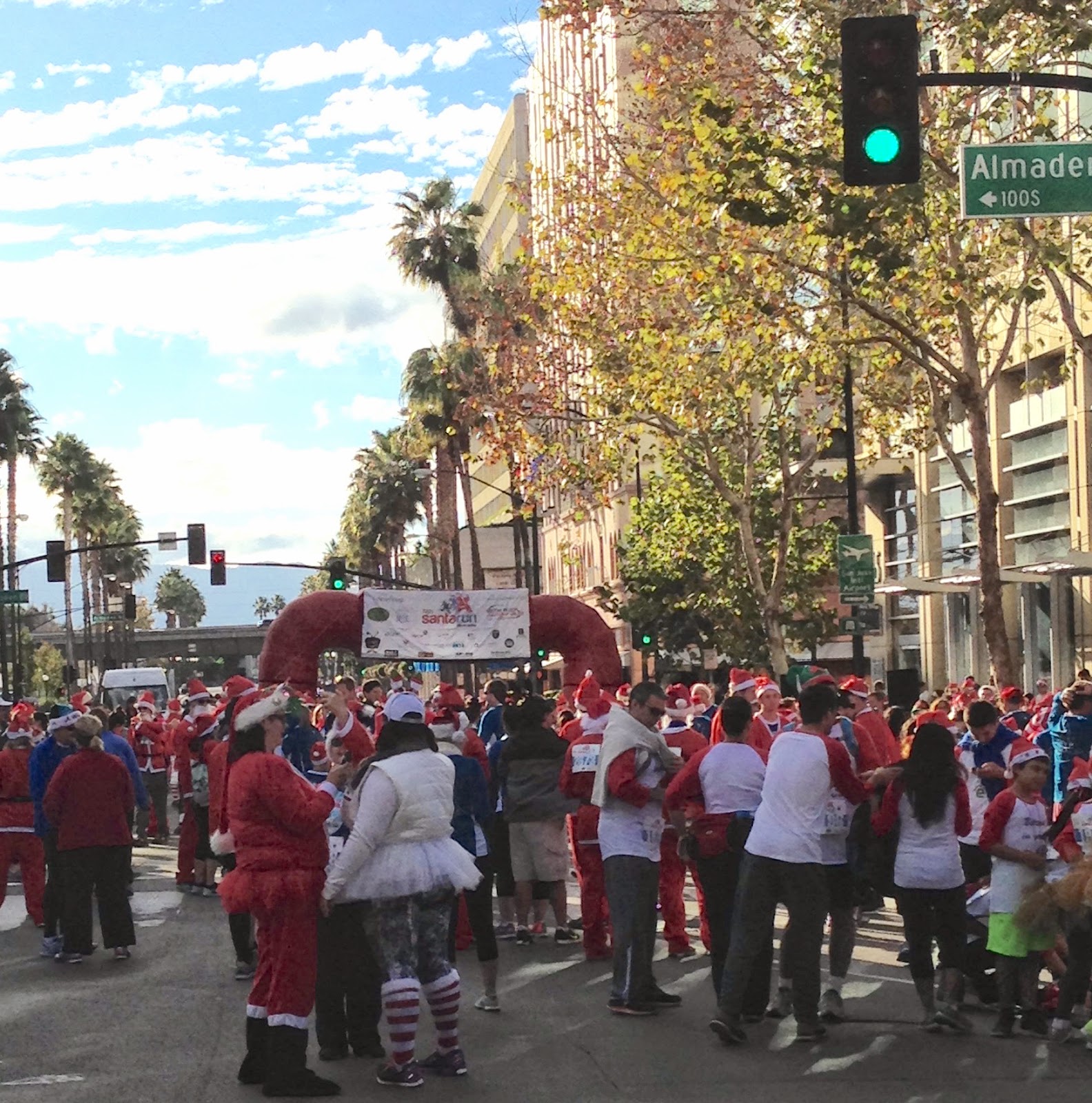 Surprise! Just when I thought I was done racing for 2014, I suddenly felt a burning desire to put on a Santa suit and run a 5k today.

The Santa Run takes place in downtown San Jose, and benefits Christmas in the Park and Downtown ICE (the ice rink). Christmas in the Park has been happening as long as I can remember - there are rides, food, games, animatronic Christmas-themed dioramas, and trees sponsored/decorated by local businesses and groups. (My high school alma mater, which is also in downtown SJ, always had a tree there every year.)

I was itching for a run, and rather than going to my usual trail, I decided to sign up for this 5k, and I brought my daughter and my mother-in-law with me - Jolie's never been to Christmas in the Park, and I figured it was a good time for her to go. (She had a BLAST, by the way.)

So yeah, this is the first time I've ever decided to do a race last minute. I registered on Saturday at packet pick-up, received my race shirt, bib, and Santa costume (complete with pants, jacket, belt, beard, and hat), and was ready to go for the next day. 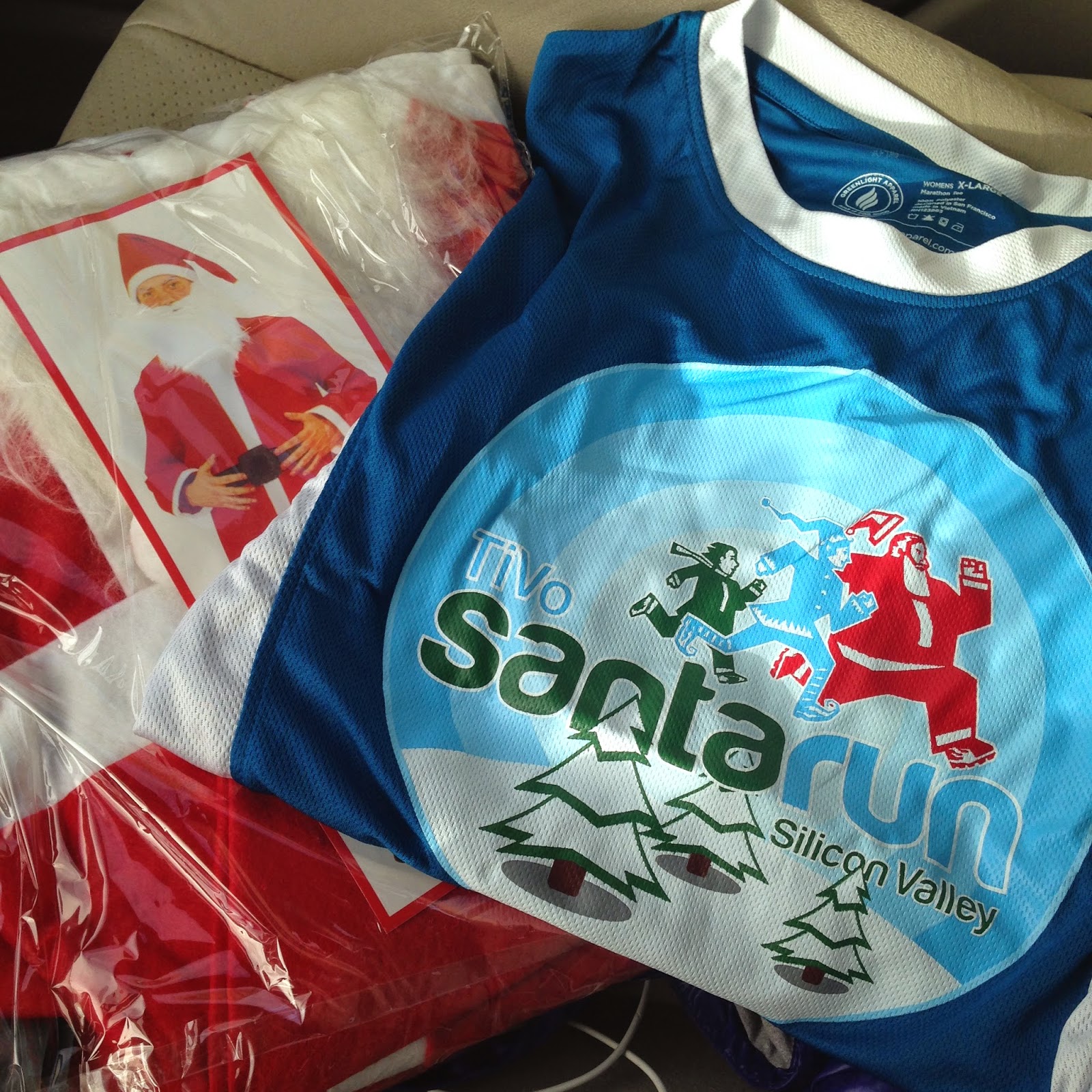 Let me just say that I am rarely ever up for costuming when I run. I like to be as comfortable as possible, and I don't tend to deviate from my usual running uniform. I've run in a tutu once and hated it. I also never run in a jacket. What possessed me to decide to run in a Santa outfit, I have no idea - I was feeling the holiday spirit, I guess.

It's funny, I couldn't even get the pants to fit. They were cut REALLY oddly, with a very high rise and slim pant legs that would not fit over my athletic thighs, and the entire suit was made of FELT, so there was no stretch. I decided I would wear my normal running outfit but wear the Santa jacket on top of it and also the hat. Also, hell no was I going to run in the beard, although I did try it on just for giggles: 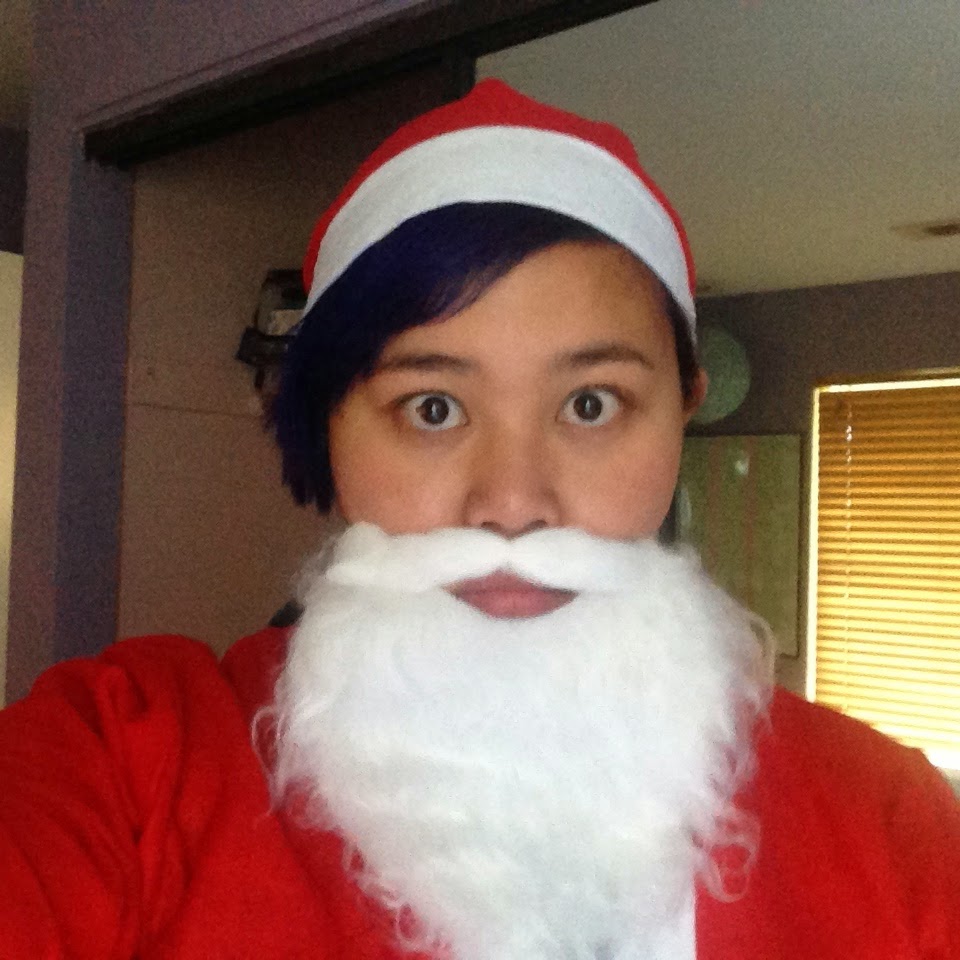 This was also my first time doing an afternoon race - 3pm? Who DOES that? But I figured that, since it was just a 5k, it wouldn't throw me off my game too much. I run that much on my weekday training runs.

So the three of us trekked downtown, and Jolie and my MIL hung out at the park while I went to run my race. There were lots and LOTS of people in Santa attire, and it was a very loose, relaxed atmosphere. I felt kinda dumb GUing before the race, but hey, a fun run is still a run, and runs require fuel.

I didn't have any specific goals aside from coming in under 39:00. (Okay, I guess that IS a specific goal.) I wanted to see if I could run the entire thing straight, since I've spent the last five months running intervals, and I consider it a good test of my own fitness to see how far I can run without stopping.

I made my first mile in about 11:30 (non-stop), and kept going another couple of minutes until I had to stop because I suddenly got a sharp pain in my calf. I tried to walk it off as best I could, and while I was walking, I took the opportunity to re-pin my bib to my shirt and then remove my Santa jacket because I was sweating buckets thanks to the fact that it was 1) long-sleeved and 2) made of FELT, for chrissakes. Yeah, I am never running in a Santa suit ever again. Apparently other people felt the same way, because I saw lots of jackets stuffed into the public trash bins along the sidewalk.

My calf pain abated enough for me to start running again, but it never completely disappeared, so I did take way more walk breaks than I wanted to. To be honest, my calf still hurts right now, a few hours later. (I do not want to hear your "I told you so," okay?) But I made a pretty respectable time - 37:13, which is not a PR, but it's the best time I've run since my PR two years ago. Actually, I didn't run any 5k's at all in 2013, but the two I ran earlier this year were about 43-44 minutes each, so... yeah, a season best? Given all the walking I had to do and how I've only run one mile this entire week (post-marathon), a 12:00 overall pace is pretty awesome. In fact, this was my second fastest 5k time EVER in the history of my running.

Because I am now in my "off-season," I'm only running three days a week, so I've got a couple days to rest up before I run again. So yes, I will listen to my body and take care of my calf now, okay? (It wasn't hurting the entire week before today, I swear.) I'm not sorry I ran this race, but I probably could've picked a better time to try non-stop running. Mea culpa.

Luckily, I had two sweet things waiting for me post-race:

Okay, NOW, for realsies, I swear... my next race will be the Star Wars Rebel Challenge at Disneyland.