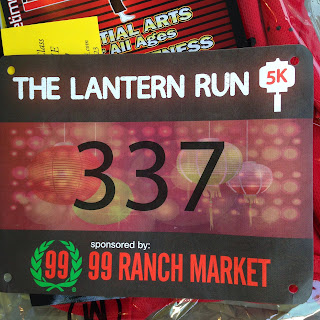 I've been trying to run for fun, instead of trying to be in intense training mode all the time, in hopes that it will snap me out of this funk I've been in - fewer miles, less pressure, less anxiety. I've been putting so much pressure on myself and setting my expectations so high, that when I inevitably fail to meet them, I am wracked with self-loathing. And I need to stop doing that.

I signed up for this 5k totally on a whim, because it's definitely a "fun run" - to the point where if you'd wanted a timing chip, you'd have had to pay extra. It's an Asian-inspired nighttime run where they give you cheap neon-glowstick glasses to wear and paper lanterns afterward - exactly the sort of run I should do to relax and not put pressure on myself. (I know how jerky that sounds, that I just said I was doing a 5k to relax.)

So I opted out of the timing chip and even elected not to bring my Garmin, because who cares about time, right? I went with my friend Michelle, who is newer to running, and I figured it would be a fun time spent with a friend, at the end of which there would be Mogo's and Scoops (food trucks) and cute little Asian snacks from 99 Ranch.

Well, when we got there, they told us that everyone had been upgraded to a timing chip FOR FREE. Uh... yay? Now that there would be a time attached to my name, I knew I HAD to make an effort. But I wasn't going to leave Michelle behind either, so I would pace with her.

I don't know if this is their first year, but it was a bit of a mess. The packet pickup area was fine enough, but they did a warmup dance thing (why is it always a dance thing???) that finished with one minute to go before it was supposed to start at 7:30. And then everyone kind of headed over to the start line, with no instruction whatsoever about lining up according to pace, and we couldn't even see the start line because it was set up just outside the field at Spartan Stadium, and there is a little hill coming out of the stadium, so those of us who were farther back couldn't see over the top of the little hill. And then the people on the PA system started counting down the seconds (5 minutes late, might I add) and then... nothing. No one moved. We were still standing there, waiting for something, and I was like, "Come on, there MUST be other runners who know what they're supposed to be doing!" It turned out that no one at the very front of the crowd could hear anything that was going on at the very back of the crowd. And then finally someone sounded a horn at the front and we were off.

I know this isn't the sort of race you run seriously, but having to pick my way through all the people walking, who would not move out of the way, was still really frustrating. But the course widened as soon as we got to the street, so it wasn't that bad.

I didn't have a run strategy. After about five or six minutes of running, I told Michelle that we could walk whenever she wanted to walk, so that's what we did. Still, I suggested that we could try to finish under 40:00, if only so we could hit the food trucks sooner, so that's what we tried to do. The course was flat and straight, and we took up the entire street (for the out and back course), so there was plenty of room, and I began to relax into my pace a little. (Though to be honest, the downside of a 5k is that it takes me almost the whole thing to warm up, and then we're done.)

I loved seeing all the excited kids with their families, all the "non-traditional" runners, and all the fun costumes. When you do longer, "more serious" races all the time, the field of runners starts to become more homogenous. There were more "typical" runners at CIM, for example, than at this race. And you know what? It's all good. That's why all these races exist - to give everyone a chance to run and accomplish something awesome, no matter what your level of experience or athleticism.

So yeah, I'm glad I did it. (And not just because I had the most amazing short-ribs burrito and macapuno ice cream afterward.) It reminded me about the fun, silly side of running, and it gave me a chance to surround myself with people who are laughing and happy and just out there to have a good time without taking themselves too seriously. I need a little more of that in my running life. 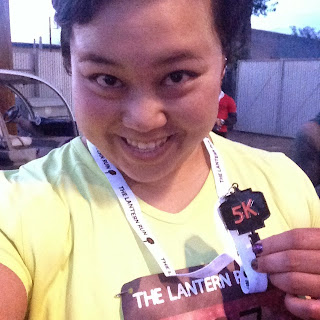 Free stuff we got: 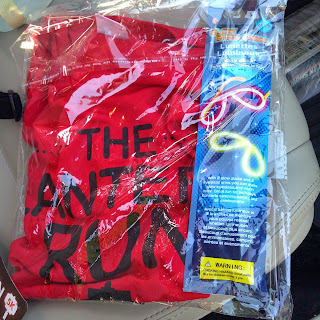 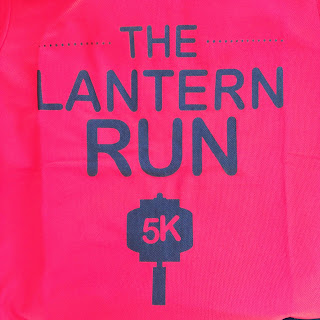 And of course, it's not a lantern run without a lantern: 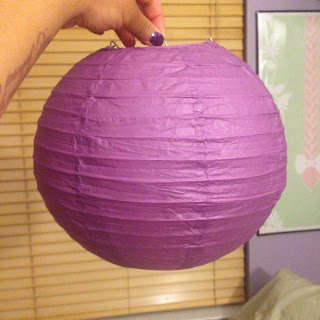 Here's Spartan Stadium at night. I'd never been here before. 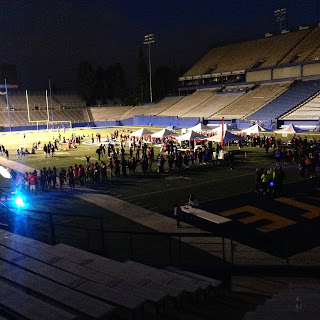 Next up? I don't even know. I've decided not to run Vancouver at all, so maybe I'll squeeze in another race somewhere. The next one that I have planned for sure is the Dirty Dozen 6-hour run in July.