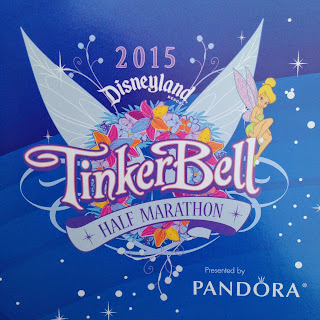 It's been a loooooong time since I've raced. My last race was the triathlon on February 28th, and I guess in a way I've been itching for some sort of event, because in the intervening time, I'd gotten really mentally and physically fatigued with my training and then decided to drop 2 of my 3 marathons for this year.

The last couple of years, I've jam-packed my scheduled with races (I actually did five races in January and February of this year alone), and it's usually because they keep me going - when I have an actual EVENT, as opposed to a training run, it motivates me. However, this year, I decided I would cut back on races once I started training for my marathons, just so I could focus more on nailing my paces and such - it was too hard to find races that lined up with my long run schedule in my training plan, and I didn't want to do races that were far above or far below the specified mileage. In hindsight, I think that was the wrong decision. Even when they don't go well, races are exciting and motivating, and it's always great to go home with a token of your achievements. (Never underestimate the power of a really cool finishers' medal.)

The Tinkerbell happened to line up with my marathon training plan, and I would've done it anyway even if it hadn't, since I'm going for a five-year streak. This is the first year the Tinkerbell has been held in May - it was previously held MLK holiday weekend, but Disney decided to hold the Star Wars Half that weekend instead, so Tinkerbell got bumped to Mother's Day weekend. 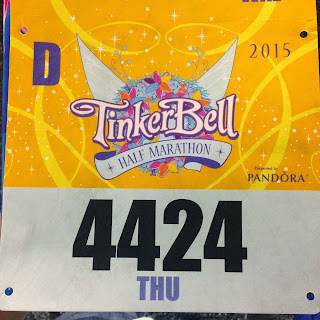 The fact that it's now in May made a big difference for me. Every year that I've been in Anaheim for a Disney race, it's been quite warm, even though it was January. But since their races start at 5:30am, I could at least always count on knocking out a good 5 or 6 miles before the sun would start to come up, and then it would only start to feel too warm for the last 3 miles or so.

This time the sky was already quite light by the time I crossed the start line, so the sun was out in full force before I even left the park. I mean, it was cool that I actually got to SEE the two parks while I was running, instead of running around in the dark, but still... this course is pretty unforgiving in terms of shade/coverage after the first eight miles, so having more intense sunlight earlier on this time around really didn't feel great.

I will admit that while I've been going to the gym to lift regularly, I haven't been running much these last couple of weeks (I've been in a slump), and I definitely didn't think to hydrate extra in preparation for the climate, so I was not in the greatest shape for this race, and I had quite a pounding headache starting around mile 10. I was waaaay more tired at an earlier point in the race than I would've been otherwise, and I have to say, I was really disappointed in myself :( I finished in 2:59:37, which is my slowest half marathon time since August. I mean, my goal anyway was to go under 3:00, which technically I did, but still, I was ten minutes slower than my Star Wars Half, and I did THAT one the day after running a 10k, on tired legs, so I was extra disappointed in my run this time around. (Even though the weather makes a big difference. Whatever. I'm a self-blamer for everything.)

Well, time to pick myself up, dust myself off, and get myself back on track. In the meantime, I was rewarded with a slightly-redesigned medal for finishing: 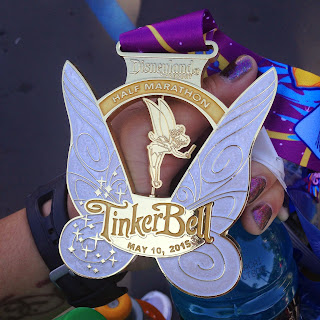 Next year will be the 5th anniversary, and you can bet that 1) I'm signing up for the Pixie Dust Challenge (another 19.3), and 2) I'm bringing friends.