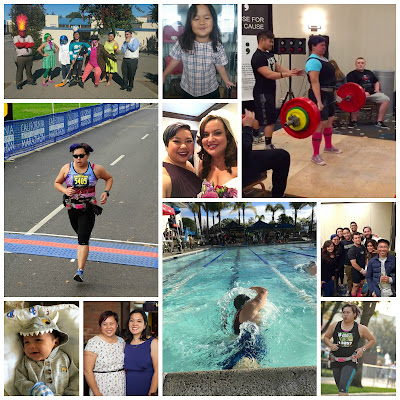 I know Thanksgiving isn't until Thursday, but I won't have time on the actual day (because family!), so I'm writing this up now :)

Between this Thanksgiving and the last, it's been a big year full of changes not just for me but for my loved ones as well:

- I went from running my best marathon ever, to not being able to run at all.
- But then I competed in my first powerlifting meet this year, discovering strength that I never would've thought I had.
- My best friend got married, and I was lucky enough to be by her side for the big day.
- My brother-in-law and his wife had a baby, so I became an auntie.
- Jolie started kindergarten. She's just... growing so much, all the time. She's like an actual PERSON now.
- I finally made the decision to move to Portland, after many years of hemming and hawing about it.
- I am more than likely not going to return to teaching as well.

... and many other things, some of which are not mine to tell.

SO much has happened. There have been a lot of triumphs, as well as a lot of moments of frustration, but overall, I have so much to be thankful for, and I'd like to take the time to express that gratitude now.

I am so grateful to know (and to have been embraced by) so many awesome people. How many people are lucky enough to have, in addition to a blood family and an "in-law" family: a derby family, a school/work family, a knitter family, and a gym family? I've amassed a large crew of amazing individuals who build me up and help me succeed, but also keep my feet on the ground, who indulge my whims and fancies but aren't afraid to tell me when I'm being kind of ridiculous.

And there are a LOT of you. So many. I am so damn lucky. My support network is made up of teachers, derby girls, Crossfitters, weightlifters, runners, knitters, book nerds, makeup artists, and alumni from forward-thinking, liberal-minded schools, so you can probably tell that I know a lot of talented, strong, compassionate, intellectual, caring people.

I would not be who I am, would not have been able to do the things I do, without all of you. Thank you so, so much. A thousand times, thank you.