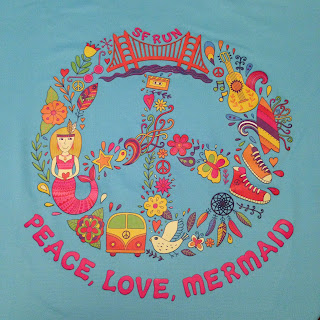 FINALLY. It feels like a million years since the last time I posted a race recap.

I wasn't even sure that I was still going to do this one (because of my knee), but I realized that this might be my last chance to do this race (at least for a while), and also, Jolie really wanted to do this run with me. She's never run a 5k before, and she has also never been to San Francisco or seen the Golden Gate Bridge, so I decided just to throw caution to the wind and show up with the intent to walk.

Okay, I didn't TOTALLY throw caution to the wind - I dug out my hefty knee brace that I used to wear as a gasket under my knee pads for derby, think that extra stabilization would help, right? Mind you, I haven't done any walking or running for a while, and the last time I attempted it, 10 minutes of treadmill walking made my knee ache for the rest of the day. Even walking from my car to my classroom every day results in me limping a little, and especially this past week, my knee has been bothering me extra.

Well, the brace definitely helped, because it's been a few hours since we finished, and I feel fine so far. And guess what? *whispers* I even ran very short spurts here and there! *looks around furtively* My cardio endurance is shot to hell right now, so it wasn't a lot, and it wasn't fast, but it was pain-free. Which is just about the best thing ever. Of course, I may feel differently tomorrow or the next time I try to squat, but for now, it feels like a victory. I feel relieved - I survived this one, and even though I'm not the runner I used to be, this means that I don't have to live a life devoid of running and races. I just need to make sure not to get too overzealous jumping back into the fray.

As for the race itself, it's the same 5k course that I remember - this is my 4th time running the Mermaid SF (I've done the 5k before, and the Sirena 10-miler twice), and it was beautiful and the weather was perfect, as it has always been.

How did Jolie do? She actually took off running with my friend Catherine and completely left me behind for the first mile! But then I eventually caught up, and then her tiredness took hold, because she did that thing that kids do when they get OVER-tired and got really cranky and upset, and she was full-on crying and stomping through the sand. But by this point we had already turned around, so it's not like we could just quit and go home, since we still have to walk back in order to get to the car, right? So I tried to talk her down as best I could, letting her rest and even carrying her for a few stretches at a time. (So, essentially, I got a good upper body workout too!) She eventually calmed down and cheered up, and by the time we got back to the race tents, she had decided to take off again with my friend to run through the finish chute, and of course, the crowd was cheering her on and the announcer called her name over the loudspeaker :) I was so proud of her! She finished with a big smile on her face.

I ran the finish chute too, and I felt a little bit like my lungs might burst, but I was just so happy for Jolie and happy about my knee that it felt more like exhilaration than exhaustion.

I feel like things are looking up for me :) 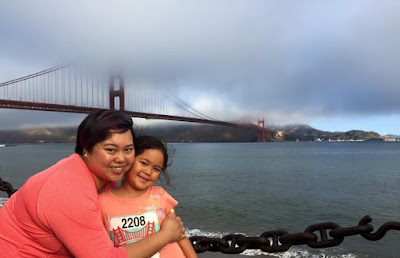 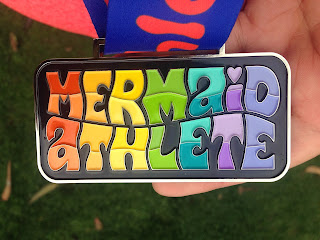 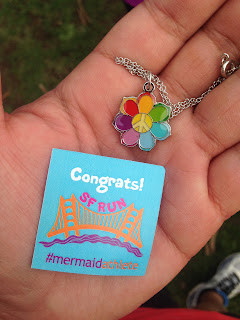 What's on deck? I've got my deadlift competition in two weeks, and then after that, I'm going to make a concerted effort to get back into running. This will probably be my last race for 2015 though. I'm thinking about signing up for the Hot Chocolate Run in January :)