David Bowie, Alan Rickman, and the importance of art

I woke up this morning to news that Alan Rickman had passed away, just a few days after the passing of David Bowie. Both men, in different ways, with their different talents, had a huge impact on me, and I feel like life will be a little less rich for them being gone.

We also recently lost singer Natalie Cole and BAMF Lenny Kilmeister. And I may not have been their biggest fans, but I enjoyed their (very different) music too.

This process of mourning the loss of people we never knew is kind of weird, I'll just say it. On the one hand, it feels strange to miss someone you've never met; I mean, you can't lose someone if they were never yours. On the other hand, they were "ours," in a way, weren't they? I mean, they weren't ours personally, but through their unique talents, they shared pieces of themselves with the masses. And because the way that each of us processes art is unique to us, in a way there's some aspect of each of their performances that belongs uniquely to us.

Which brings me to this - the importance of art.

I come from a(n Asian) family of computer engineers, so STEM has always been present in my life in some form. I myself was going to go into medicine, but I did a total about-face and decided to major in English. My family was a little confused about what that meant or how to explain it to my older, more traditional relatives (aside from "reading books"), so there was definitely some relief when I decided to go into teaching, because at least THERE was a concrete thing that could be explained. Because studying literature, on its own merit, was apparently a strange concept.

Don't get me wrong: STEM is important. It's what advances the world, and it's what keeps people alive. But (and I'm sure I will offend someone with this) it's not enough. At least for me, it's not enough.

I chose English because I needed literature and beauty in my life, and I am passionate about it enough to have devoted the last ten years of my life to sharing that love with others.

But on the whole, it doesn't get a lot of respect. The arts - visual art, acting, music, dance, poetry, fiction, etc. - and even the humanities (history, philosophy, other aspects of English like lit theory and scholarship) are considered frivolous and even self-indulgent, at times. They're not often respected as career choices, sometimes seen as just cute little hobbies. People tend to complain about the costs and fees charged by photographers, MUAHs, musicians, etc, and offer to pay in "exposure" rather than actually paying for the work that they do, because they don't see art as actual work.

Schools are cutting back on (or even completely defunding) their music and art programs. Even English, which is a core academic subject: everyone can agree that it's important to read and write, but the Common Core standards seem to be pushing us teachers towards including more informational literacy and LESS literature.

This is not okay.

Art is important. Art touches everyone, no matter who we are. It taps into those things that make us human, whether you are making art yourself or whether you are enjoying it. When you're a fan of someone else's art, there is a special relationship that forms between you and the artist, even if it's just in your own head. And it's something that stays with you, sometimes forever. For example, Alan Rickman isn't just an actor - he's also the face of Colonel Brandon of Jane Austen's Sense and Sensibility and of Severus Snape of JK Rowling's Harry Potter books. He brought two absolutely beloved literary characters to life, ensuring that they will both be THAT much more memorable for his contributions. And David Bowie wasn't just a guy with a guitar - he was groundbreaking, and his music empowered me.

So as I sit here, raising my mug of tea in salute to two men who were masters at their respective forms of art, I urge you: Write. Draw. Sing. Recite poems. Paint. Take pictures. Play guitar. No matter how bad you think you might be at it, do it anyway, because it's important. Read books (and even fan fiction). Go to museums. Enroll your children in a theatre workshop (or enroll yourself). Go to concerts and operas and plays. Master your eyeliner. Decorate a cake. Enjoy some mindless, fun distraction-entertainment sometimes, but also make some time to watch/read/see/hear things that are difficult, that evoke sadness, anger, or guilt. 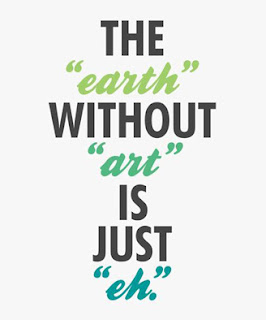