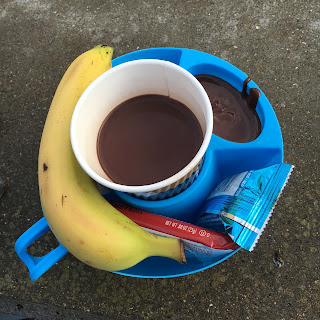 I don't have much to recap in terms of race performance - I literally just wanted to do this race for the jacket and the chocolate :)

I did this one two years ago and had a great time - it's fun and well-organized, and now that they offer packet mailing (for an extra fee), it made things really easy. (I just made sure to go with a friend who doesn't share my phobia of driving in San Francisco.)

I've been completely inactive for the last couple of weeks due to being on vacation and then being sick, so I haven't even been lifting, let alone running. I knew better than to attempt any outlandish feats of athleticism - I just showed up, sans watch, told myself that I'd run small portions if I felt like it, and walk when I didn't.

I ended up finishing in just under 58:00, which I feel is a victory for me, because it's right at my target walking pace and so far (six hours later), my knee is pain-free. *knock on wood* If my knee continues to feel well, then I will try adding in really short running intervals this week, because I will have cleared an important hurdle: previously, I couldn't even walk that fast or that much without hobbling around afterwards, and you can't run if you can't walk. If today's race shows that I can walk, then that's a tentative green light for running.

So yeah. Fun, quick, and chocolatey. Sad I won't be here to run it next year, but it looks like they're working on a Portland race (I assume they mean Oregon), so hopefully I'll get around to doing that 15k eventually.

Here's the jacket. I like that it's a jacket instead of the pullover we got two years ago. 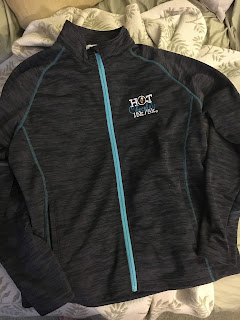