Leave the couch potatoes out of it 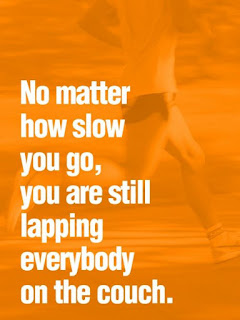 It's thrown around a lot. I fairly confident that whoever originally said it, as well as whoever has shared it since, was operating from good intentions and was trying to be encouraging to us slowpoke runners. I'm sure even I've said something like it a time or two.

But what I've come to realize is that... we're throwing the couch potatoes under the bus, and that doesn't sit right with me.

I get it - we want to reward effort. Especially effort from beautiful, athletic people. And if you're not beautiful and athletic, you will at least get rewarded for trying to be beautiful and athletic. Or something like that. Society only seems to be okay with fat people if they're trying not to be fat anymore.

Maybe you work three jobs, and it's all you can do to make sure your family eats well and still get 6 hours of sleep. Maybe your job already requires intense physical labor and your joints ache when you get home every day and you're downing anti-inflammatories like candy. Maybe you have a chronic illness that keeps you from exercising. Maybe you have been berated/bullied for your weight your entire life, to the point that you have intense anxiety about being seen exercising and the idea of setting foot in a gym or out on the sidewalk scares you to the point of tears. Maybe you are what society calls "lazy" and you're perfectly okay with that.

The point is, it's your body. It's your body, and therefore it's none of my business, and therefore I'm not going to throw you under the bus just to make myself feel better about being a slow runner. I'm not inherently better than someone else just because I go to the gym. My life doesn't hold more value or meaning just because my goals and deeds are athletic.

Because you know what? I was somebody on a couch once. Hell, I'm STILL somebody on a couch much of the time (and if I'm not on a couch, I'm often wishing that I am). I've spent so many years of my life internalizing that BIGGER, BETTER, FASTER message, that these days when I'm actually forced to be "on the couch" (due to injury), I beat myself up for it severely. And it kinda sucks, because clearly, I'm injured and I should be healing, but instead, I'm feeling depressed about "doing nothing."

So, again, I understand the point of the message and what its intent was, but sometimes you can't just consider intent - you have to consider impact too. And whether intended or not, using people who just don't have the means or the inclination to prioritize exercise as your own personal motivation... it just doesn't seem very nice to me. Each and every one of us moves through this world with our own baggage, our own set of obstacles, and to quote the great Atticus Finch, "You never really understand a person until you consider things from his point of view . . . until you climb into his skin and walk around in it."

So, I beg you, find your mojo some other way - maybe look to athletes who are at a level that you hope to reach; maybe look at your own numbers; maybe just walk around yelling BEASTMODE. I don't know. Just maybe... leave the couch potatoes out of it?