"Who knows where thoughts come from? They just appear." 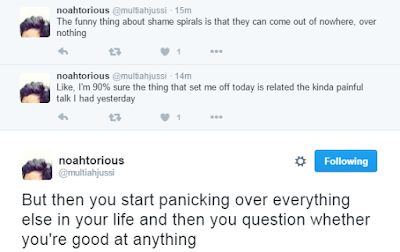 I had a really rough day yesterday, emotionally, and then I happened to see these tweets today, and the last one especially so perfectly encapsulated what I went through.

It starts with small thoughts that are nothing out of the ordinary, but then it just piles on, and the weight that each one adds to my mental state grows exponentially - I'm stressed out lately because of my knee injury not healing fast enough and my competition coming up. I'm also feeling a general sense of "battle fatigue" because you know how I feel about racism and sexism, and I feel like, with social media and this being an election year and everything, there are just a lot of disgusting headlines. These have been battering at me in recent weeks.

Then add my stress and guilt about moving to Oregon and particularly about leaving teaching, which I was feeling pretty strongly after sitting through my department meeting which was particularly focused on some stuff that is happening for next year (when I won't be here). Don't get me wrong - moving is still happening, and overall, I'm more excited than anything, but it's hard to shake the guilt of being The One Who Leaves, even though I know that it's the best decision for myself and my family.

But that particular voice in my head won't stop whispering "You quitter," and there's another voice in my head that whispers back, "Well, you were never really that good at teaching anyway. Everyone is better off without you." And keep in mind, as they duke it out inside my head, there are still the first two things stressing me out, the first two voices telling me "There's probably something seriously wrong with your knee, and even if you're fine to lift on Sunday - which MIGHT NOT HAPPEN - maybe whatever you did last week did some PERMANENT DAMAGE!" and also "This world is full of horrible people, and it's all going to hell anyway!" *cue evil laughter*

So I already was in a somber mood by the time I got to the gym, and then I barely made it through my bench press set - even though I know logically that 90% of your max for any MORE than 1 rep is a lot to handle, I still beat myself up for not being able to complete the set, and I was exhausted, and my 90% deadlifts felt way heavier than 90%, and I couldn't do anything else listed for the workout because of my knee.

Oh, and I had started my lady times yesterday too, so... there's that. I mean, on the plus side, it started a few days in advance of my competition, but on the down side, it means I'm definitely not pregnant, and that is something I am hoping to be in the near future. Even now would've cool, universe.

I know logically that I will be fine no matter what, and that in the end, things will all work out for the best, but once you're sucked into that spiral of bad feelings, it is really hard to stop that onslaught of despair and panic.

Who knows why this happens? Exhaustion? Hormones? Every now and then, things reach a breaking point, and the pot boils over, and then after that... numbness.

I'm still waiting for the numbness. Because after the numbness comes clarity, and I could use some of that for sure.

But for right now? Mess. A big spirally whirlygig of mess.