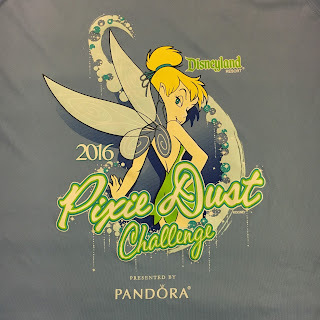 This year marks the 5th anniversary of the runDisney Tinker Bell Half Marathon, and in addition, it will be my last Disney race for a long time (since it's not so easy to drive down to Anaheim from Portland), so of course, I had to make it EPIC - I decided to run the Pixie Dust Challenge. (And Jolie did the kids' race, of course.)

Basically, the challenge is to run the 10k on Saturday and the half marathon on Sunday, totalling 19.3 miles in one weekend. I've done this before, but I was in much better shape then, and I didn't have knee pain plaguing me every step of the way, so I knew this was going to be a true challenge just to finish.

I haven't been training at all, except for some 4-6 mile runs/walks on the weekends. It's amazing how, when you get out of the habit of running regularly, it becomes difficult to reintroduce it back into your life. I had intended to train for this while I was training for my powerlifting meet, but of course, my knee proved to be a major obstacle, and then after that was over, I was injured/sick/just plain busy, so I didn't even run enough to properly train for a 5k, let alone a 19.3-mile weekend.

At the Expo, I picked up my bib and was pleased to find that my legacy status had been noted on it officially - I was one of the many runners who had run every single one: 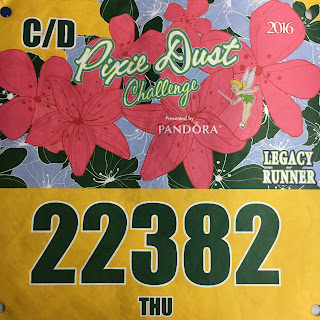 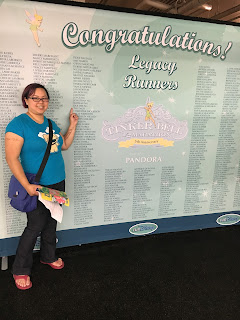 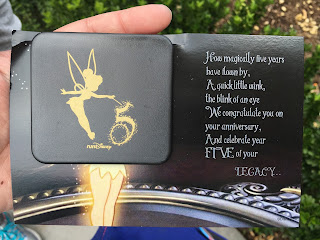 As a gift, we received this cute little mirrored compact. (I was kinda hoping for something to wear/carry as I run, but this is cool too!) 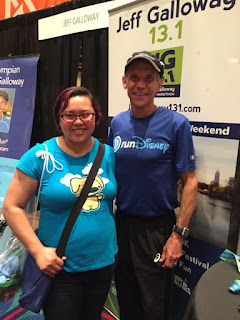 By the way, I met Jeff Galloway at the expo! I'm such a proponent of his run/walk style of training, and it seemed fitting that I would finally get to meet one of my running heroes, at my last Tinker Bell. 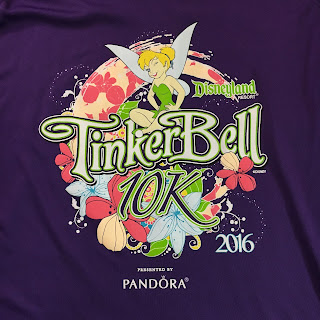 I ran the 10k with my SIL, Laura, and it was her first time running a race of that length. (We've done 5k's together before.) We've been trying to train together as best we can.

Imagine our surprise when we woke up that morning and heard the not-so-gentle pattering of RAIN! I've run every single Tinker Bell, plus the first Star Wars Rebel Challenge, with some of those races taking place in the month of January, and not ONCE has it ever rained while I was there. SoCal, what are you good for if not sunny weather??? 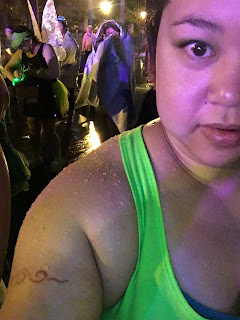 Luckily it stopped while we were still standing in the corrals, and it didn't rain again after that. But the ground was wet, which made for some interesting running, especially in the big crowds and with all the tram/train tracks that run throughout the two parks. I watched MANY people totally bite it out there on the race course that morning. *cringe*

My knee was fine for most of the race until about Mile 5, when I was exhausted enough that I was not being careful on my walk breaks. The thing is, my knee wasn't hurting while I was running. I am VERY careful about my form when I run. But the second my watch beeps and my walk break begins, I kind of go into RELAX mode, and I'm far less careful, so my knee was twingeing, popping, and aching on my walk breaks. I had to be really vigilant while I was walking, which was its own brand of exhausting. We finished in about 1:40 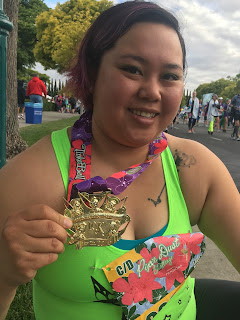 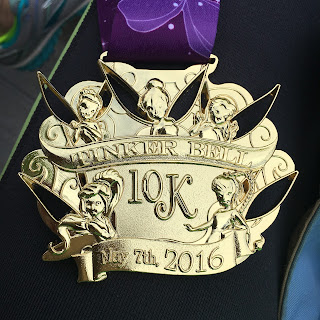 After a long day at Universal Studios (I will write about my trip to Wizarding World of Harry Potter on my book blog, Transitive Verve), I fell asleep quickly, ready for my second 4am alarm in a row. Part 1 of the Pixie Dust Challenge, done. 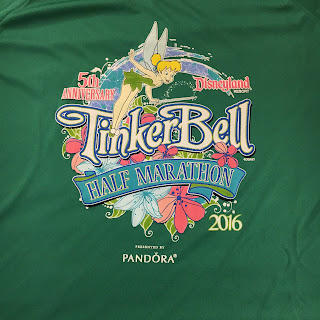 This time, I was running on my own, and this was going to be the "wild card" of the weekend. I wasn't NEARLY trained enough for this, but I figured I would run my intervals for as many miles as I could, and then walk as much as I could after that, until either my knee or a race official required me to stop.

I actually managed to stay on pace (16:00-mile or faster) for the first seven miles. which was no easy feat considering how those are the most crowded miles of the whole thing. But I hit the wall pretty quickly, and after I passed the mile 8 marker, I pretty much couldn't run at all after that. My knee was achy and sore, and soon after, my feet and the rest of the parts of my legs followed suit. I'm not going to lie, every first aid tent I passed, I considered throwing in the towel and asking for ice and bandaging.

I couldn't walk fast, but I could keep a pretty consistent walking pace, so I just prayed that it would be enough to keep me on pace for an official finish. I did NOT want to get swept, because it would render me ineligible for the Pixie Dust Challenge medal. Luckily, sometime after the mile 11 marker, an official stationed along the course was yelling out numbers as we went by: I was about 9 minutes ahead of pace with only two miles left to go (meaning, I had 16+16+9 minutes to cross the finish line officially).

My spirit had been flagging, but that got me me to push myself a little. At the next mile marker, I was told that I was about 6 and a half minutes ahead of pace, with only the last 1.1 to go, and I knew I was golden. I even managed to run the finish chute! It hurt, and my legs felt like lead, but I rallied enough to pick up my aching feet as I crossed the timing pad. I was so exhausted and in so much pain that I cried after they handed me all my medals. I was unabashedly wiping away tears as I stepped up to take my victory photo: 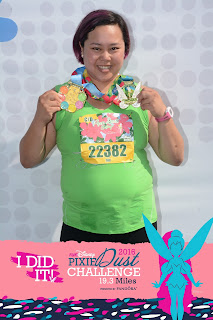 Surprise: Legacy runners had a special extra ribbon on their half-marathon medal that said "Legacy Runner" on it, in addition to the regular ribbon: 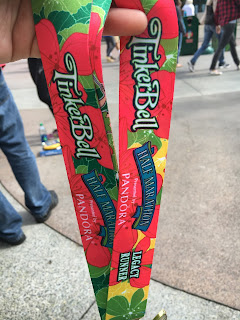 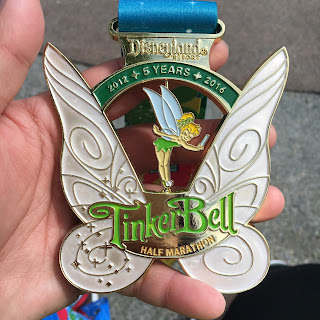 And of course, here's the Challenge medal, which I think is the most beautiful Disney medal I have ever seen: 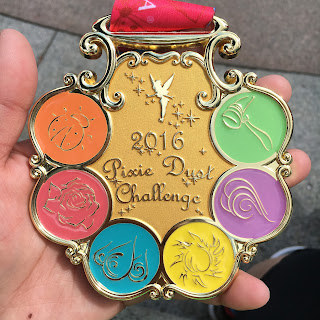 And the medal round-up:

My watch read 3:47, but for some reason, runDisney is only listing my gun time (4:07). *shrug* Honestly? Do I care about my times this weekend? NOPE. I finished on time and completed the challenge, and that's all I care about at this point.

It's been two days since the half, and so far, my knee feels fine. (The rest of me, NOT SO MUCH.) What I've gotten out of this is that I don't have to let my knee stop me (even if it's against medical advice?). As I posted (HALF) jokingly on Facebook this morning, I'm tentatively looking at my schedule to see if I could find a way to train for the Portland Marathon, because of course, my eyes have always been bigger than my stomach as far as running is concerned. What can I say? I don't want to let go of running long distances. *shouts into the void* I'M NOT GOING TO GIVE UP!

I actually have signed up for the runDisney virtual 5k series, so while the Tinker Bell was my last run at Disneyland, these won't be my last Disney medals :) I'm not going to lie, I really am just doing it for the medals, which are Mickey Mouse-themed.

My next in-person race will be the See Jane Run 5k in Alameda. Chocolate and champagne!