Let me tell you about Jimmy. 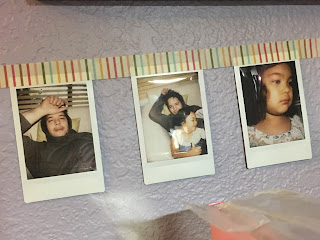 I talk about a lot of aspects of my life, but one thing I generally refrain from talking about much is my long-time relationship with my boyfriend/the father of my child, Jimmy. Mostly, it's to respect his privacy. He's a very private person, even more so than I am, and I know he would not appreciate my sharing every little detail of our relationship on the Internet. But it's Father's Day, and I have let many Father's Days pass without talking about this person who has been central to my life for so long, so I'm going to do that now.

In terms of upbringing, Jimmy is the polar opposite of me. I had a very wholesome, stable childhood, with two doting parents who basically gave me every opportunity in life, and we lived in the same area surrounded by our extended family for basically my whole life.

Jimmy is biracial, with a white American father and a Vietnamese immigrant mother who met in Vietnam because of the war. He was born in the Bay Area, but at a very early age, he and his family (which includes his older brother and sister) moved all the way across the country to Georgia. As you can imagine, there weren't so many people who looked like him where they were living. As you can also imagine, it's hard being a child of two cultures, and not feeling white enough to belong with all the other kids.

His parents divorced when he was six, and it was hard on all the kids, but as the baby of the family, I think there was a lot about this time of his life that he didn't quite understand at the time, and that he's still feeling the effects of today. I don't know the particular details, and I don't want to misrepresent anyone involved, but it was not an amicable divorce, to say the least. His relationship with his father is basically non-existent now.

His mother moved them back to the Bay Area, a single parent bringing up three children on her own. Her family was also around, so Jimmy went from being around mostly white people to being around mostly Asian people. And as with before, he did not feel like he belonged - he wasn't Asian enough, he couldn't speak the language, and moreover, he was growing up to look more and more like his father (in physical stature). He was a big kid, and today he is a big man, and being around a lot of generally-smaller Asian relatives, he was often looked at askance. He was always the odd one out.

I met Jimmy the summer after our freshman year of high school. (We went to different high schools, and met through Jimmy's brother John, and John's girlfriend at the time.) We started talking online at first, and he was cute and silly, and we liked some of the same music. We were quite different though, the private-school princess and the public-school guy. I can smile now and say that I don't know what he saw in me back then, since I was kind of spoiled and elitist in my early teen years. To me, he was a shy, cute boy, who towered over me but who had gentle hands, who was eager to share himself with me and I was eager to do the same. We wrote each other letters (and emails), exchanged mixtapes, went to movies, learned about each other as well as ourselves as we grew into adults together.

But lest you think we're some sort of "high school sweethearts" fairy tale, things weren't always easy. Scratch that - even now, things are rarely easy. There was a series of events in his late teens/early twenties that was "merely" tumultuous at the time, but that eventually led to very serious anxiety and depression. This was happening at a time when I was away for college and grad school too, so I was not there for him as much as he probably needed to me. While other people our age were partying, figuring out their lives, possibly contemplating marriage, Jimmy was dealing with panic attacks and an ever-growing inability to be out in public among strangers without being triggered. And I was there, trying desperately to hold on and help him the best I could. But what did I know about how to help someone through mental illness? Even now, I don't know if I'm actually helping or if I'm hurting. There are things that I understand about mental illness in theory, but when the person you love is hyperventilating in front of you, tears laced with rage as negative memories are flooding him, equal parts asking for your help and equal parts pushing you away, it's hard to remember theory.

We got pregnant when we were 26. We were in a happy period after a particularly bad year, and we decided that we wanted to move forward together. We moved in together, finally, and things still weren't smooth (and I take a lot of responsibility for that), but we love Jolie so much. Jimmy is an amazing father. I suppose as someone who grew up pretty much without his father, he knew exactly what sort of life he wanted to create for our daughter, so in between the panic attacks, in between the crippling depression, he still managed to take Jolie to the park, to make her a perfect bacon-and-egg breakfast, to play with her and raise her and give her his trademark sharpness, irreverent sense of humor, and love of videogames. As a stay-at-home parent, he gives his all, even though on any given day, the level of "all" can fluctuate. To use spoon theory terminology, some days he has a lot of spoons, and some days he has none. Some days we can handle a short family outing for ice cream, and some days he wakes up shaking and crying, and I know I'm going to have to cancel my plans for the day as we ride out the storm.

For years, he has been the invisible partner, the one quietly behind the scenes making sure that Jolie and I are okay, even when he is not okay. He is an amazing father - all of the things that people find amusing or charming about Jolie are qualities that come from him. And on this day, Father's Day, I wanted to tell his story, because he deserves all the love and appreciation that the world can give him.