I'm willing to wait for it 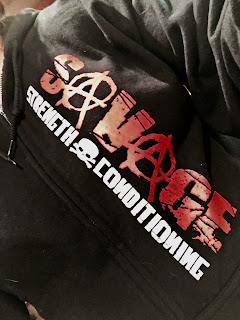 So, last night I went in for my very first workout with Savage Strength Conditioning, which is about 35 minutes away from my house. I've been in contact with Jeron, the owner/coach, for the last year or so, since I knew I wanted to continue training after our move.

It was awesome, and different. I'm not going to do a whole compare/contrast thing between gyms, but I will comment on one thing: I joined Savage as a part of their competitive powerlifting crew, so not only was everyone there last night also a powerlifter, but they aren't merely casual lifters either. These guys and gals are into it, and they're exactly the sort of people I need to push me forward.

I love my old gym, and I miss them terribly, but one thing that was difficult is that powerlifters, particularly competitive ones, were few and far in between. And there were many times when it was literally just me powerlifting, and everyone else was doing the planned workout. (Gabe, my PL partner in crime, works out earlier in the day.) And it's fine, because I'm not the most social person anyway, but sometimes I just felt alone in my journey. I'm not saying that people weren't wonderfully supportive and kind, because they absolutely were and I love them to pieces for it; I'm saying that I often wished for a crew (or even a buddy!) who was doing the same thing I was - someone with whom to share the journey and the experiences.

I had a lot of fears going into last night, about disappointing Jeron and Team Savage, about disappointing everyone at Anchored, and especially about disappointing myself. I haven't worked out since July, and even before I left, I was showing up only sporadically anyway. I've spent the last two months in such a funk because my life has been in this suspended state for so long where I was ready for normalcy (craving it!) but I was not ready to definitely head in one direction or another. I wasn't ready to join Savage until now because we've been trying to get our life settled, and I think the lack of physical activity really took its toll on me mentally - I've been feeling depressed, restless, even physically ill. Nothing about my life right now resembles what it used to be, and again, I know I should count my blessings that I have been given the opportunity to take a breather, but like I've been saying, I am not a person who handles "rest" very well.

So anyway - my fears. In addition to my mental funk, I have been dealing my fears as well. I've spent the last few years watching two sports that I love (derby and running) eliminate themselves from my life as options, and then I experienced tremendous difficulty with my knee in the two weeks leading up to my competition in March. I would be lying if there wasn't a voice in my head that constantly asks, "What if you can't do this anymore either? What if this thing is over before it even starts? What if you never match your PRs ever again, let alone exceed them? What if you have already reached the end of the line?"

And I feel pressure now (self-applied pressure) to measure up. I've set this bar for myself, and I am desperate to hurl myself over it. I mean, I'm smart enough to know that I need to take my time getting back to my old level of fitness, but there is an undercurrent of urgency to live up to my numbers and to make people proud, to create a space for myself in this sport and prove that I belong there. In a way, it feels worse now to know what I'm capable of, as opposed to being a wide-eyed newbie who was just good at following instructions: now I'm invested; I have something at stake. And the expectations I've placed on myself are a double-edged sword.

But I need to trust the process, and I need to trust my body. Being betrayed by another person is a difficult thing, but what about when it's your own body that betrays you? How do you rebuild that trust? 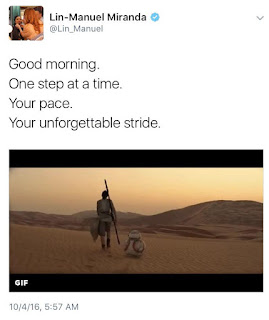 It felt good to lift. I'm happy to be back. I can't wait to see what the future holds for me in this sport.