Lessons from a snow day 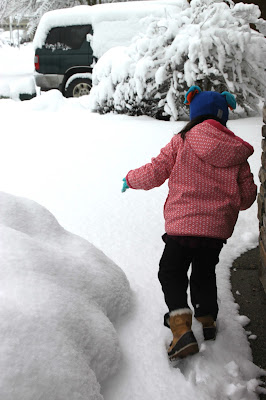 “The water hears and understands. The ice does not forgive.”
― Leigh Bardugo, Six of Crows


As you may have heard, last week Portland (and surrounding areas, like where I live) just got the MOST SNOW EVER. Well, the most snow Portland has ever gotten in a really, really long time. (Other parts of the country probably wouldn't bat an eyelash.)

At first it was fun - a FOOT of snow to stomp around in, and no way to get to school or work? There were sounds of play and joy coming from all over the neighborhood. Even my dogs had fun hopping around the backyard before scrambling back inside to escape the cold. (And we had fun watching them!) It truly was a winter wonderland, and we all marveled at the giant flakes falling from the sky, forming a smooth, pure blanket of white on the ground. We finally had enough snow to build a proper snowman, not a snow-covered dirt snowman like the one in To Kill a Mockingbird. It was breathtakingly beautiful and awe-inspiring, seeing our normal everyday world transformed.

And then, of course, reality sets in. You know, the reality where you realize that you're running out of food because you didn't think there would be THAT much snow leaving you stuck in your house, and you live at the end of a tiny private street where you can pretty much bet that there will be no plowing or shoveling, and you notice that the only neighbors who've left their houses (judging by their tire tracks) are the ones who have 4WD vehicles, which your Prius is NOT... 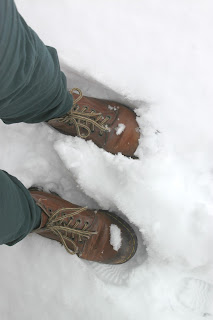 This wasn't the first time I've had to drive on ice/snow (that happened just a few short weeks ago, though!) but the conditions this time were more severe. I'm not sure what's worse - the anxiety of driving on really icy roads, or the anxiety of possibly getting stuck on a thick patch of snow at a really bad time (say, at the front of an intersection when your light turns green - true story). Suffice it to say that, at this current moment, I do not remember what it is like to drive relaxed. I've been limiting my goings-out to nearby places (so at least if I get stranded, I'm not far from home), but every second I'm in my car, literally from the moment I pull out of my garage (because our driveway has been covered with packed snow and ice), I'm a bundle of stress.

I'm California born-and-raised, so what do I know about driving in winter weather? We freak out when it rains too hard! (Because our infrastructure just can't handle too much rain, just like Portland can't handle too much snow.) I drove as slowly and as carefully as I could manage, gearing myself up for nasty looks and other angry behavior from cranky drivers. (It's a good thing I gave up my California plates a while ago - I feel like less of a target now.)

But you know what? I didn't get any anger. This is probably stupid, but it really surprised me. I wasn't the only person leaving a TON of space between myself and the car in front of me. I wasn't the only one who started braking really early going into a red light. I wasn't the only one who accelerated really slowly when the light turned green. (I know this is basic Driver's Ed Safety 101 type stuff, but come on - there are a lot of drivers out there who risk their safety in order to get somewhere faster. Including me.) No one inched up on pedestrians trying not to slip walking across the parking lot. Every time a car or two ran a red light (because it was easier to keep going than to try to brake hard with all the icy patches), no one honked or behaved aggressively. We just... understood. And we let it go.

As the days went on and the ice and snow lingered, I realized that the whole world (or at least, my small part of it) was doing their utmost, first of all to be safe, but also to give each other time and space out there on the roads. Even though this has been some of the most stressful driving I've ever done, this was also the most patience and kindness I've ever seen exhibited out on the road.

It was like, we're all in this. It sucks for everyone right now, whether you drive a tiny hatchback or a giant truck that could climb over tiny hatchbacks. But instead of losing our cool and making things worse (and even more dangerous) for everyone else, we worked through it. I'm not saying that there weren't accidents or injuries or people who were jerks, because I'm sure there were. I'm not saying there weren't moments of frustration. But in the end, it was like, we handled it, not by bullying others out on the road, but by remembering that we're all in the same lousy situation, and if you can't do anything to make things better, then the very least you could do is to not make things worse for everyone else. 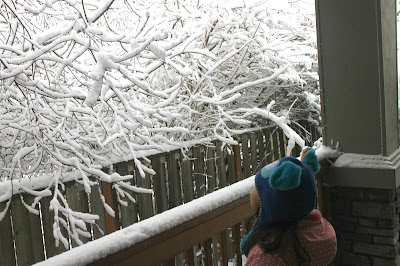 Today, it's a sunny 50 degrees, and the rain that started yesterday has washed away most of the snow. It's not fully back to normal, but we're getting there. I don't know how long this feeling of peace and good will will last out there, but I'm thankful that I got to experience it.