The freedom in forgiveness 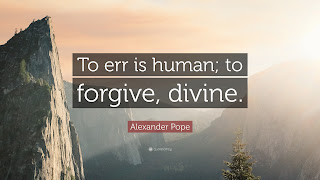 One of the constant struggles in teaching (one of the MANY constant struggles!) is coming up with a late work/make-up work policy and getting students to understand it, respect it, and stop asking for so many damn exceptions. Trust me, I've had MANY a conversation about the appalling entitlement of kids who keep ignoring the not-so-fine print (seriously! Boldfaced and underlined and caps-locked size 16 font!!!) and asking us to ignore the rules we've worked so hard to set out for them.

I've played around with how late to allow work to be turned in, and what percentage to dock. I've never allowed them to re-do or re-write. "Them's the rules, kid." I spell it out for them on the first day of school, and it's up to them to sort out their business out within my parameters. And I get frustrated when I have to constantly answer the same questions over and over.

Well, thing work differently at online school. At orientation and staff development, we were told that for SO many kids, we are probably the last resort in a long line of attempts at being successful at school. That if these kids couldn't make it with us, it's entirely possible that they might give up on school altogether. And therefore, we can't have the same kinds of rules that you might see at a traditional school.

I don't know if I was half-expecting that chaos would reign and I would be drowning in papers or what.

What I got instead... was this strange sense of freedom. When kids emailed me asking if they can have extra time, I said "Sure," and wrote their names down on a list. When I had to give kids low D's or F's because their work was not what I was asking of them, I wrote in my comments, "Please feel free to redo!" and I suddenly felt unburdened, like, at least now, it's up to them and they don't have to feel stuck with that grade. When I relaxed my grip and gave them more options, I ended up giving myself more options besides fielding angry/upset emails from students and parents as I tell them that there's nothing else they can do, SORRY.

I'm not saying my job is easy street now, by any means. Teaching is teaching, and some things are the same no matter what format your classroom is. But emotionally, I'm feeling a lot better. I'm a lot less stressed out about "BUT THE RULES!" I'm not saying that I don't have deadlines or that I don't have a late penalty, but I can tell my kids "Hey, don't worry" and actually mean it because once it's late, it's late, and I won't dock any more than 10%, and you might as well take your time and make it good. And it's less pressure on them, but they still have to take the initiative to do it and talk to me about their late work or any rewrites they do, and I feel a little more like a partner than a taskmaster, and suddenly I'm working with my students instead of fighting them.

And I think that's how I've always wanted it to be anyway.

So in short... yes, work is hard. But it is going fairly well, and I'm happy to be doing it. I think for now, I have found where I am meant to be.