"The plan is to fan this SPARK into a FLAME": Deadlifts for Doernbecher recap, health scares, and looking ahead

December 16, 2017
Now that I am done with catching up on grading and winter break has officially begun, I can now take some time to reflect on recent events! (Literally... I just finished my grading about half an hour ago and walked around the house, arms up "Rocky" style in triumph, before sitting back down at my computer to start this entry.)

This weekend was QUITE A TRIP.

Saturday was Deadlifts for Doernbecher. This was my second time competing in D4D, and I have to say, this year was so, so, so much bigger than last year. Which is not to say that it was small last year, but this year D4D was held at Ancestry Brewing and featured pro lifters (men and women) coming in from all over the country. Standing in the warm-up area in the back, I was shaking in my Chucks just being around them and watching them get ready. 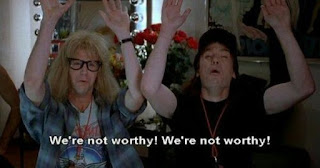 Because I'm not going to lie, I kinda want to BE one of them someday. I know I have forever and a ways to go, but if I think about all the sports I've ever done, powerlifting is probably the only sport I have even a remote chance of being good at. (It was definitely never going to be swimming, running, or roller derby. Is napping a sport? I'm probably not even good at that.)

So, IT WAS GREAT. Despite my nerves, despite my doubts, I hit all three of my attempts: 405, a nervous 455 that didn't feel great, and a triumphant 470 which is essentially a match to my previous PR from March 2016:


I was happy enough to even celebrate on the platform a little. :) Because you know what? I wasn't sure it was going to happen. Even though I've hit that number before, the fact that I haven't gotten remotely close to that in the almost-two years since definitely has had me wondering if it was a fluke. Maybe I got lucky that day. Or maybe I just didn't have it in me anymore. I don't know. My brain is SO not nice to me. I am constantly plagued with impostor syndrome in nearly all aspects of my life, so I've spent all this time wondering if maybe I've "lost" it or if I never really "had" it to begin with.

Thus, it was extremely gratifying to know that yes, I still have it in me, and that actually, I might have more. The 500lb pull that I started wishing for so long ago, that I had started to give up on mentally, suddenly returns into my line of vision, and now that I am BACK to being so close to it, I want it.

I left that day with a plaque, which is AWESOME, but even more importantly, I walked away with a rekindled belief in myself. I left with faith in my abilities and my strength again. I left with a strong sense of "Yes, I can do this!" and "I'm not a phony!" and "I still have more to give to this sport!" And those things are not easily won, for me.

And then on Sunday, eating a celebratory hamburger and fries for lunch, I had a severe allergic reaction that landed me in the ER.

It's a meal I've had before. I mean, I haven't eaten at Red Robin in months, but I have eaten there before. I have eaten this exact Black and Blue Burger and Sweet Potato Fries before. But never have they caused my throat to tighten severely, or for my lips to itch and get bumpy, or for my tongue to swell up in my mouth, or develop hives all over my body.

To be clear: I don't blame Red Robin or anything. I had zero idea that that would happen, because I've never had that reaction to anything before. Was it even the food? I don't know, but it was likely the culprit, because it started as I was eating.

The ER nurse told me that it's possible to develop allergies even in adulthood which makes me feel... not so great. Because now I have some potentially life-threatening allergy and I have no idea what it is, and now I get to experience the fun of trying to avoid it without actually knowing what it is. (Yes, I'll be contacting an allergist soon. Let's just say I won't be going back to RR for... ever.) I also now have to carry an Epi Pen in my purse at all times (JUST LETTING Y'ALL KNOW), and we have one in our house too. Just so I don't... you know... die.

So in the course of 24 hours, I went from feeling ultra powerful and strong to being totally felled by sweet potato fries :/ 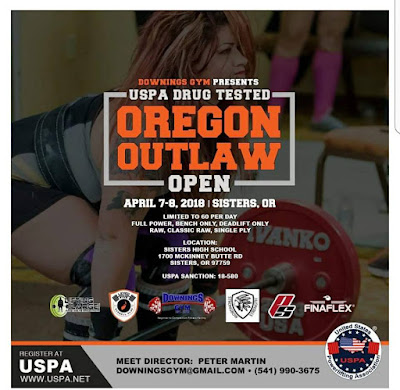 I decided that I needed to ride this wave of motivation and empowerment and to set my sights on my next goal while I'm still feeling good about myself. I know it's not going to be easy, and it's going to require a lot of work and commitment, but after all this time, I am really feeling ready to make this happen. I WANT my name on an official USPA result sheet. Whatever numbers I end up putting up, whether they're good or bad or whatever, it's about time that I just COMMIT, because it's a step in a direction, rather than standing still, which I feel like I've been mostly doing. (And it's nobody's fault but mine--I've had a lot of changes happening in my life this year, and I just haven't been able to be consistent.)

I'm still trying to figure out exactly what my goals are, but yeah, my immediate goal is to show up. Record a squat. Record a bench. Record a deadlift. Have officially-recorded lifts at a sanctioned meet.

My next goal (not chronologically, but in terms of priority) is to go for that 500 pull. That's not to say that squat and bench aren't important to me, but you KNOW I've always been about the deadlift. I don't have a great bench, and I'm trying to rebuild confidence in my squat because of my bum knee, but deadlifting is my THING, and I want to hit that number. And I'm being told by people who know better than me that it's within my reach, so I should listen to those people and actually go for it. :)

And then tertiary to that is to go for a competitive total. An ELITE total. 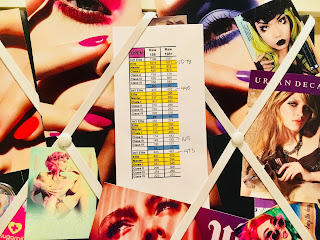 Above my desk, where I'm literally sitting right now, I have this inspiration board--a real-life "Pinterest," if you will--that mainly just has pretty pictures of makeup postcards, since I keep my laptop at my makeup table. It's my vision board. But today I added this sheet that I made two years ago. (I mean, I printed it out today, but I've had it saved on my computer for two years.)

It's the USPA's spreadsheet of standards/classifications for women, and I have it narrowed down to RAW 198 and 198+ (because I don't know as of yet which weight class I'll end up in), with the standards for Elite, Master, and Class I highlighted, and my now-two-year-old PRs written in. (Well, now I can definitely say my deadlift number still stands.)

How's that for a vision board?

So yeah, I've got my work cut out for me, but I AM EXCITED. I HAVE PLANS. And I have a slew of people cheering me on and ready to help me go for it. So tired as I am, I am feeling STOKED, and I feel like I CAN DO THIS. I just need to find the strength within myself to stick with training so that I can make this happen. DON'T LET ME BAIL. I'm saying that to everyone right now. DON'T LET ME BAIL.