Official meet results were posted, and I'm having some feelings

April 19, 2018
I’ve been having a rough training week so far, since we’ve switched into a faster/high-rep phase, and I’m still stuck on heavier/slower mode (story of my life, lol) but I wanted to share this because 1) it cheers me up, and 2) it reminds me why I need to tough this out: because even though I did really well, I still have more to work for.

Official meet results were posted (in yellow/white above), which means YAY I’M OFFICIAL!!!! Which was ultimately my main goal in the first place (show up, survive the day).

And also, I’m now listed on openpowerlifting.org, which is a really cool site if you like looking at numbers and rankings. As of this morning, I’m 127th among all USPA Raw female lifters (the skinny middle part of the picture), and I’m in the top ten for my weight class (bottom part of the picture) 😁 Like, in the entire country.

I’m FLOORED. I am not being falsely modest, I swear. I kid you not, that I was not sporty growing up. (People who have known me/followed me for a while, you know this.) I have always been larger, slower, and reluctant. No one would have ever looked at me when I was younger and said “She could be pretty good at SOME sport.” I mean, some people might look at me NOW and not think that about me, because they still think that "fit" and "athletic" are indicated by a certain aesthetic (e.g., not fat), particularly if you're a woman, and I'm pretty sure that I do not "look like" an athlete.

But hey, the numbers are there. Like, officially there :)

This whole thing--training, the meet, the attention I've gotten, the sponsorship--has been a huge whirlwind for me, and I'm still not quite sure how to process all of it. I mean, aside from JUST KEEP DOING THE WORK. I'm not lying when I say that when I train, I just kind of keep my head down and go through my workout. I don't know anything about the WORLD of powerlifting as a sport; I only know how to do the movements. Until now, I had no idea where I ranked among other powerlifters, because yeah, I know my numbers are high, but following people like Stefi Cohen, Gina Aversa, Kim Walford, etc., on Instagram has a way of making me feel like my numbers aren't really all that special in comparison. (And yeah, I've talked about this whole comparison effect before, a lot.)

So, yeah, I don't like to spend a whole lot of time thinking about where I am in comparison to other people, and when someone says to me, "I don't think you realize how strong you are," I'm like, "I really don't! I just show up and do my thing!" and maybe it's better that way, because it keeps me grounded. In the end, it doesn't matter where my results place me, but it DOES matter whether I can honestly say that I tried my best and that I put in the work. It DOES matter whether I've shown respect to my fellow lifters and gratitude to my coaches, the officials, and the volunteers. What matters is what I continue to do on a consistent basis, not what I did that one time.

But just for a minute, let me revel in the fact that this nerdy, awkward fat girl found a sport that she likes and that she is good at :) I'm sure the numbers will change with every meet that gets recorded. I will be bumped up or down or whatever, I'm sure. But for now, I will enjoy this and use it as motivation to keep on keepin' on. This week back has been rough for me, and I've spent all week doubting myself (picture me comically tearing my hair out, like, What is wroooooong with me??), but seeing this motivates me, because it shows me that these hard days, these workouts that focus on the things I suck at... they have a purpose. They have an effect. And that effect is illustrated pretty clearly in those numbers. I need to do the things I'm bad at, so I can get better at the things I'm good at.

So yeah, things are going to be hard for me, for a while. But I just need to keep reminding myself... 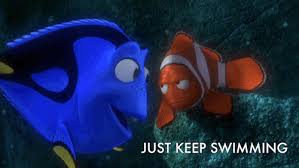