May 12, 2018
For some basics on bullet journalling, please check out my previous blog post on the subject.

So, bullet journalling is a huge, HUGE thing, with the draw being that it's an adaptable system--people can make their bujos however they want to, however it works for them. It's highly customizable, ranging from minimalistic and functional to fabulous, intricate works of art in their own right. (And I should say, "Bullet Journal" is technically its own brand, so every company that wants "in" on bullet journalling has had to call their products "bullet planners" or whatever, but it's basically all the same.)

However, the main commonality between all bujos everywhere has been the fact that it is a pen-and-paper thing. "The analog system for the digital age," proclaims the official website. So what happens when you take your bujo and make it digital???

Digital planning has been picking up steam, apparently, but it appeared on MY radar when one of the biggest bullet journal names in the game, Kara from Boho Berry, announced that she was going to try out digital planning (and start offering one of her own for purchase on her Etsy shop).

At first I was like, "Whaaaaaaaaat! NOTHING BEATS PEN AND PAPER. What is even the difference between digital planning and using my Calendar app on my iPhone?"

Narrator: There is actually quite a difference.

I continued to watch Kara's videos on digital planning, and when Boho Berry digital planners launched a week or so ago, I decided to pick one up for myself (which is to say, I downloaded it) and give it a try.

Before we start though:


Alright, so... the digital planner that I'm using is essentially a PDF file with links in it, and in order to use it, you need to have an app that can annotate PDF files. So in addition to buying the planner, I had to download a new app. I'm using the recommended GoodNotes (Android users have been encouraged to check out Xodo, I think?), but I don't even mind because this app pretty much blows my mind with all the neat stuff it can do. But I'm getting ahead of myself.

Here's the front page of the planner: 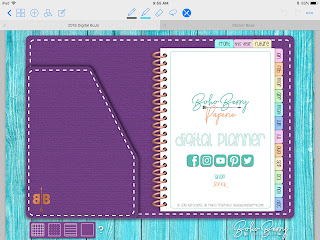 The tabs are clickable (as are all the social media icons, which will take you to Boho Berry pages). If you click on one of the monthly tabs on the side, it will take you to a monthly view: 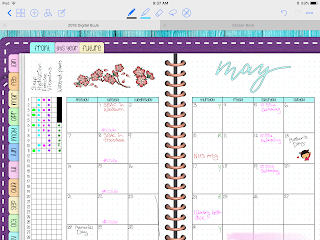 So, remember how I was like, How is digital planning EVEN different from using my Calendar app on my iPhone??? Well, this is how. Instead of clicking on things and typing info into an app, I get to handwrite on the screen. Yep, that's MY ugly scrawl right there. The actual physical act of writing things down is still there. It's just that instead of writing with paper and pen, I'm writing with a stylus on a screen. But it is definitely not the same as typing.

In addition, I can still use stickers to decorate my planner! Those cherry blossoms above? Those were actually free Boho Berry downloads. Here they are in my digital sticker book (which came with my purchase of the planner): 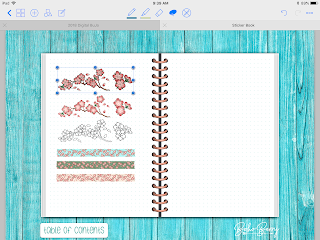 You use the lasso tool to select the sticker you want, copy it, and then just paste it into your planner. As a fanatic of stickers and washi tape, I love the idea that I can collect a ton and actually use them as many times as I want to. (Since, you know, once you use a sticker, it's not typically reusable.) Also, thanks to additional (but free!) apps like Vectornator and Magic Eraser, I can turn basically any image into a digital sticker for my digital planner, including words/labels. It's entirely possible I've spent more time making stickers for my planner than actually using my planner =P Also, thanks to the ability to resize, I can use stickers however I want, as long as the image resolution holds up.

Okay, so back to the monthly spread:

Boho Berry's particular layout has a small tracker on the side, which I love. I originally saw her do this in her paper bujo and replicated it in my own notebook, and I found that I used it a lot more than when I had my tracker on a separate page from my monthly spread, because in my planner, the pages that I look at the most are my monthly spread and my weekly spread. Everything else, I kinda forget to look at sometimes.

I could easily use Vectornator to type up everything I want (in whatever font I want) and paste it in, but I like writing in all my dates and events. (I am grateful not to have to draw the actual calendar and tracker though!) Again, I'm not using an Apple Pencil, so my stylus/iPad interaction is not super precise, but my handwriting on screen looks halfway decent if I zoom in. And that's a neat thing about digital planning: most dot grid notebooks have 5mm spacing, and they will ALWAYS be 5mm spacing because you can't zoom in on a piece of paper; at best, you can just get a finer-point pen. But as someone with typically LARGE handwriting anyway, being able to zoom in makes life easier and makes my writing tidier.

This particular planner is set up so that, to get to the weekly spreads, I could either "turn the page," or I could click on the upper left corner of each Monday box to jump to that particular week. (By the way, I HAVE heard that Kara is working on Sunday-start planners for those of you who prefer Sunday starts.) So, for example, if you click on where I wrote the 7 above for May 7th, it will take you to that particular week.

I didn't screenshot my entire week for you, but I did want to show you the same two days in my Leuchtturm vs. my digital planner: 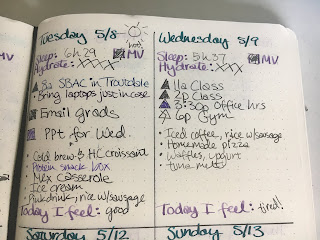 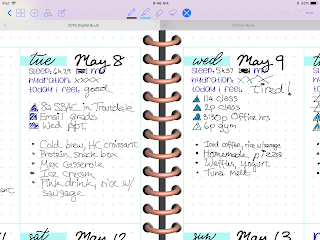 I've been double-planning just to see how it goes: I'm still primarily sticking to my notebook, and then I'm writing the same stuff in my digital planner. The layouts are the same--8 quarter-page boxes over a two-page spread--except that in my notebook, I made the first box my "Notes" box (with the seven days of the week following), whereas Kara started the spread immediately with Monday and made the last box the blank one. In the digital planner, the days of the week were already written in, and then I had to go in and write the dates themselves. (If you buy the dated planner, the dates are already there.)

You can see that it's still a dot grid page (with roughly the same amount of rows/columns per page as a Leuchtturm), and although the aesthetic is spiral-bound, you obviously don't have any coils in your way when you write on the left side. I decided to make a "sticker" of the things I track daily using Vectornator and Kara's Berry Bubble font: 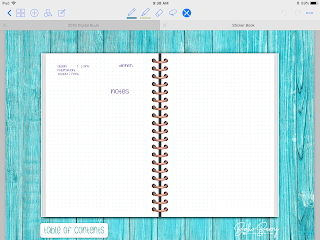 So I can just copy-paste that part into each day of the week, instead of writing it by hand seven times. That's nice :) What's also pretty cool is that, if you're a super-perfectionist, GoodNotes has a Shape Detector tool, so when you're making, say, a bunch of checklist boxes, it will make your boxes (and triangles, and circles, and lines) more "perfect." (I'm NOT a super-perfectionist, but it's nice to have that ability.)

And of course, if I kind of just mess up or change my daily plans completely, I can use the "undo" option, the erase tool, or even the "clear page" option, and re-do/start fresh. Which you can't really do on paper. (I mean, yes, you can use pencils or erasable pens, but that can only take you so far.)

Okay, so what with all the cool new features and capabilities that digital planning offers, why stick to a notebook for your planning needs???
Honestly, this is a lot like the eReader vs. physical books debate. There are pluses and minuses for both, and as someone who loves books as well as my Kindle, and has room for both things in my life, I'm kinda feeling the same way about digital planning. (Though, if I eventually get an Apple Pencil and compatible iPad, that may tip the scales in favor of digital.) Even if I switch to digital planning, I'm still going to sketch, do calligraphy, and journal in a notebook, mainly because I don't want things THAT personal getting backed up on iCloud but also because I just cannot see myself ever giving up pen and paper. But this is definitely an exciting new option, one I'm happy to spend some time exploring :)