"Figure out who you are, and do it on purpose": a recap of Deadlifts for Doernbecher 2018 and looking ahead 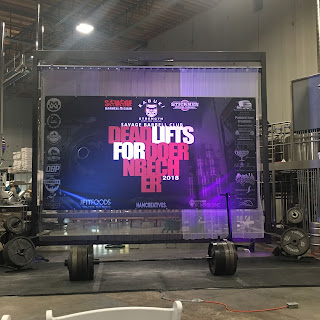 I have to admit, I've been lost lately.

It's been an ugly combination of poor physical health exacerbated by stress, which leads to poor mental health, which then exacerbates the stress.  It's a terrible cycle. I have to say, I have cried in front of people a little too often lately. Like, AT WORK, even. This is my twelfth year of teaching, and I have cried at work more times in the last month than I have in all the years before. I feel like I've been sick for going-on-two months now.

It's not just teaching though--I'm stressed out by many different aspects of my life right now, and even the things that are supposed to be enjoyable are also now adding to that.

Case in point: Deadlifts for Doernbecher this year. The amount of times I've worked out in the last few months could probably be counted on one hand. This hobby of mine that I happen to be good at has started to become a huge monkey on my back, because every day that ticks by that I have to skip a workout (because I'm tired or sick or swamped with work or have to do other important things) is a day that weighs just a little heavier on my shoulders. And many of those days ticked by.

And this date was looming. I signed up fully intending to dedicate myself to training, and things kept coming up, and I kept feeling worse, and then the guilt of not going got piled on as well. Even in the last month leading up to today, I was only able to make it in three (???) times, just to get SOME deadlifting done, in between all the sick days and the crying and stress. I was thrilled to find that I still had a lot of strength left in me, but I did not feel great that I couldn't devote myself more.

The anxiety grew. And then three days ago, I got fully hit with a bad cold. (My sickness wavers between low-key cold with some exhaustion and anxiety headaches/stomachaches, and FULL ON Nyquil-needed, carrying-Kleenex-around, wanting-to-pass-out-at-7:30pm cold.) So, whatever optimism I had after my training session last Friday came to a screeching halt, and did I mention that yesterday was my birthday, and I still went to school anyway the rest of this week because I feel like I've been taking too many sick days already. Oh, and I haven't slept more than 6 hours a night for the last month or so, except for just a couple of times, including last night.

I was thiiiiiiisclose to deciding not to lift at all today.

But the truth is, I really wanted to be there. I really wanted to show up. I knew that if I decided to stay home, I would hate myself for it forever. I would absolutely regret staying home, WAY more than I might regret showing up sick on very little sleep and even less training. And besides, with all the SUPER strong people lifting at the event today, who's going to notice me being less than my best anyway? I'm nobody important in the greater Pacific Northwest lifting community. So who cares how I do, right?

My plan was to show up, and just conserve as much energy as possible. I tried to sit a lot. I tried not to talk much, because my throat was extremely scratchy, and I was having coughing fits that made my eyes teary. And I've been feeling so extremely down lately, that I had to remind myself to rein in any negative thoughts I was having about myself, because it's a charity event to benefit a children's hospital--this day is not about me and my numbers and my missed opportunities and my guilt. Like, GEEZ, Thu, stop being so self-centered, and stop being such a downer. Just chill out and have fun.


And lo and behold, I FEEL BETTER.

I mean, I'm still sniffly and sick, but like, never underestimate the importance of adrenaline and endorphins, because I feel better right now, physically and mentally, than I have in a very, very long time. I am feeling a sense of peace and clarity that has been missing for quite a while, and I'm just like, IN SUCH A GOOD MOOD.

I ended up taking 1st in my division again (and got a nifty metal to show for it), and a renewed sense of purpose. 480 is my current max, and the last time I pulled that was in April, and I think that it means something that my body can still handle this despite how inactive I've been in the last seven months (since the pregnancy and the miscarriage and the new job/new school year). I think it's the universe's way of telling me YES, your body is obviously meant to be doing THIS, so find a way to get back on track with your training because THIS IS WHERE YOU THRIVE.

And then tonight, at home, I decided to watch the movie Dumplin' on Netflix, based on the YA book that came out a few years ago, and while that movie itself deserves its own post for being so amazing about self-love and acceptance, one of the things that is important to know about the movie is that it is VERY chock full of Dolly Parton's music and quotes, including one that stood out to me as being timely for the day:


Figure out who you are, and do it on purpose.

It was the "on purpose" thing that really spoke to me, because it made me think about intentionality in my actions, especially when it comes to powerlifting. I have said before that I "fell into" powerlifting--I started out with strength training because I wanted to PR my third marathon, and then discovered that I had a talent for deadlifting and squatting. I am genetically lucky, and I am lucky in having a great coach and great places to train that work with my schedule, and all this luck has gotten me pretty far indeed.

But if I want to go even further, then I'm going to have to rely on something a little more than luck: I need intentionality. I need to do this on purpose. I need to start setting myself up for success rather than relying on my good fortune to save the day.

So, looking ahead, I have a meet coming up in January (hosted by one of the gyms I belong to!), and it's only a month away, but I will try to make the most of the time I have left. My grand plan is to qualify for USPA Drug-Tested Nationals, which is in Las Vegas in July. I need a Class 2 total to qualify, which is 779 pounds for the SHW class and easily achievable considering my current total is Elite at 1,119 pounds. I don't necessarily need my A-game for this January meet, so that takes off some of the pressure, but at the same time, I'm never happy about showing up with anything less than my best--I guess I have to accept that "my best" will vary on any given day, though, and that's okay.

But no matter what my best is right now, I need to move forth with intention. The fact that things went so well today really cements for me that this is who I am; now I need to do it on purpose.