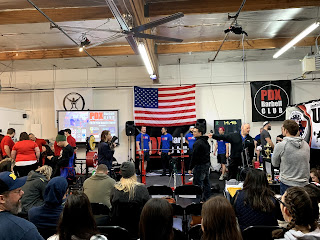 In 2017, a few months after I had first moved up here to Oregon, I was signed up to do a springtime meet. But I dropped out because I wasn't able to commit to training, and I didn't want to show up with anything less than my best. Like, I couldn't fathom the idea of competing and not going all out, so I didn't want to do it at all, even though I could've probably broken records and made a decent showing.

Can you relate? I think there are a lot of us who are like, "If I can't be awesome, I don't even want to try." Admittedly, it's probably not the best way to go through life, but that's kind of how I've always been.

Yesterday, however, I did that very thing: I showed up to a meet untrained, under-rested, and still trying to get over a cold and cough. You know, after a WEEK of stressing out about my students' grades, the end of the semester coming up, and the piles of essays waiting for me at home.

I signed up for this meet a while ago, because it was hosted by the awesome people at PDX Barbell Club, the gym where I train, so I figured that, if anything, I would feel totally comfortable because I would know half the volunteers and officials there, and I'm familiar with the equipment because I train on it all the time, and it's like, four traffic lights from my house. Could NOT be more convenient, right?

Right, except that it's January, which has alllllllways been my worst health month ever. On top of the fact that I've had a pretty bad health year ever since my last meet in April: a miscarriage, a stressful new year of being back in the classroom, and a neverending cold that varies in degrees of severity, but really hasn't gone away since it began in November-ish. Oh, and I was recently diagnosed as prediabetic too. Yep. And my mental health has been pretty reflective of my physical health too, so... I'm trying really hard not to guilt-trip myself for being unable to train, but at the same time, the try-hard perfectionist in me will always be yapping in my ear, like, "Well, can't you just suck it up and deal?"

But anyway... *shrug*... life is what it is. You do what you can, where you are, with what you have (or however the quote goes). And for me, it meant really adjusting my goals for this meet, which is to say, I had only one: qualify for USPA Nationals.

It sounds like a big goal, and it is--I don't want to underplay that or diminish it, because I know a lot of people have to put a lot of effort into getting there. But from a factual standpoint, when you have an Elite total under your belt, achieving a Class 2 total should not be hard.

So, that was my motivation for not dropping out this time. Jeron and I agreed ahead of time that we would play things conservatively because above all things, I need to get better (like, get healthy), and that after months of not really being active, the last thing I need would be to completely overload myself with big numbers and then have to recover from THAT as well as whatever my current strain of illness is. Like, that would just be setting me up to be sick for even longer, and that is something I do NOT need.

(Also worth noting: hi, I'm typing this from a speech and debate tournament at my alma mater, Lewis & Clark College, because work does not stop for powerlifting competitions. I had to get here at 7:30 this morning, and will probably be here at least 12 hours. So... yeah.)

But still... that naggy little voice in my head is like, "There will be people here who have trained for months, and this meet is a big deal for them, and you're just going to waltz in there, and that is so disrespectful, and you don't even deserve to go, and you should give up your spot for someone on the wait list," and etc, etc.

My naggy voice isn't very nice to me most of the time. But it also keeps me humble, so there's that too.

So, I went. I didn't train, but I did show up for some check-in sessions just to see where my numbers were, and we determined that for squat and deadlift, I can definitely hit above 400 safely, and for my bench, I hit 155 without much struggle, so it was still worth it for me to go and qualify, even if none of my numbers would be max efforts. It wouldn't be the first time I've ever shown up to an athletic event unprepared (see also: dozens of races I didn't train for, but showed up just to have a good time and get free food), but it would be the first one where my naggy voice was really angry about not living up to other people's expectations and, more importantly, my own.

OKAY, GET TO THE MEET RECAP, you say.

Well, if we're going to get "firsts" out of the way, then we might as well take care of another: I got red-lighted on my squat opener.

For those who don't know, your squat opener is the most important lift of the day, because any time you miss all three attempts of any lift, you get disqualified and you can't move on with the rest of your competition. So your squat opener, which is supposed to be your easiest attempt to begin with and get your foot in the door so you're not disqualified IN THE MORNING, is important. Like, it's supposed to be the one you can make, NO QUESTION, because when you miss an attempt, you have to pretty much repeat that same number until you get it. And when you don't make it the first time, it becomes a mental thing, a nemesis.

I've never missed an opener for anything in my life, and I missed my first squat at 370-something, because of DEPTH. (I'm not saying it was an unfair call. I'm annoyed with MYSELF for missing it.) Like, I didn't miss it because it was hard for me, but because I should've paid extra attention or just been extra careful or something. I was also the first person THAT DAY to miss an opener (the only person to miss any opener all day, if I recall correctly?), so.... there's that too. For a number that should've been cake for me. But again, keeps me humble, right? It reminded me not to take this for granted and to make sure to be extra careful, because all of a sudden, I was watching people go up for their second attempts, and technically, I still wasn't "in the game" yet with a completed squat, and if I were to get red-lighted on MY second attempt, I KNOW it would become an issue in my head.

(Thank you, Heather, for getting all these vids! I didn't even ask anybody, because I didn't think I would be worth video-ing, but I'm grateful for this all the same!)

Luckily, that did not happen. I went for the same number for my 2nd, making sure I went a little extra deep because I knew I could handle it, and I nailed it and then hit 402 for my 3rd attempt. Sure, I wish I hadn't missed my opener, because I know I could've ended up with a higher squat for my 3rd, but again... life is what it is, and you do what you can, where you are, with what you have. I'm happy enough that I got to 400 (because I didn't want to miss my goal of qualifying for Nationals, which, again, was my only goal), so I didn't feel too upset about it.

My bench was similarly weird: I made my opener, but I missed my 2nd attempt because the bar went in the wrong direction, and I couldn't recover it. We decided to go up just a little bit anyway for the third, because it's not that it was too heavy, but just that I need to, like, push in the right direction, and I made it, at 154:


And while I hadn't been particularly nervous or stressed out all day (the perk of having low expectations, I guess?), once I finished bench, I knew I was golden because deadlifts have always been my best lift, and I recently did Deadlifts for Doernbecher, so I had relatively recently done at least some work with that. I went 3 for 3, finishing with a 440 third attempt:


Which put me at a 997 total on the day, which was totally enough to qualify for Nationals. Not gonna lie, the fact that I was 3 pounds short of breaking a thousand for the day bothers me a little bit. Especially since I had missed attempts I totally could have made. But oh well... life is what it is. I'm not THAT upset about it. And really, I did eek in with a Master-level total, which, if we were going by the old stipulations, also qualifies me for IPL Worlds. (Now you have to get a Master total at Drug-Tested Nationals to qualify for Drug-Tested Worlds.)

I did, however, feel bad every time someone complimented me or gave me praise, because I really didn't think I deserved any. And I don't know that I think I deserved winning first place in my weight class either. I know that, objectively, my numbers are respectable enough, and that they are someone else's goals. Just like with diets/weight loss, my "Before" might very well be someone else's "After," and I should be grateful. And I AM grateful, but the fact of the matter is, I didn't work for this. I didn't train for this. I don't deserve any praise for basically being really lucky in this aspect of my genetics. This wasn't heroic or inspiring, and I felt like I was lying to people somehow. Like I'm a fraud.

But anyway. I hung up the medal anyway, because it would've been weird not to accept it, but I'm letting it serve as a reminder to make up for today. When I go to Vegas in July, I'm putting in my all. With the caliber of lifters that I'll be competing with there, I don't expect that I will win any sort of anything (small fish in such a large ocean!), so let this medal serve as a promise for my efforts for Nationals. I will train hard to earn MY medal, and hopefully nail some PRs in the process. 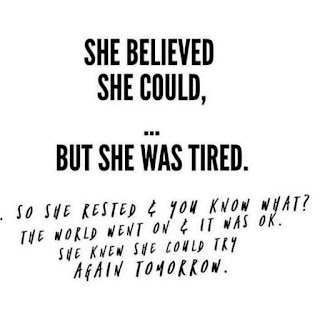