Quitters never win, but sometimes they live to play another day

January 24, 2019
In the late spring/early summer of 2017, after months of trying, I found myself pregnant for only the second time in my life. We discovered soon after that the pregnancy was ectopic, and I had emergency surgery to remove an ovary.

Had the pregnancy been normal and healthy, the baby would have been due at the end of January 2018, so... I would have a kid turning 1 right about now.

This past spring/summer, I managed to get pregnant again. And my heart broke a second time when it ended in miscarriage.

Had the pregnancy been normal and healthy, the baby would have been due at the beginning of February 2019, so... I would be waddling around, very nearly full term right about now. 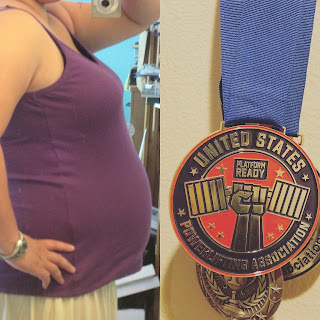 Instead of a birthday or a due date circled on my calendar, I have put a star by February 1st, the day that registration for USPA Nationals opens.

I've been talking about going to Nationals since the dates were first announced a couple months ago, but the thing that has gone unspoken so far is that in order to meet this goal, in order to achieve THIS dream, there's one that I have to give up.

My partner and I have talked about this at length, with emotions running high. He would love for us to keep trying, to not give up, but he also understands my decision, and why I'm choosing powerlifting.

This isn't about not wanting to give up my body. I know it LOOKS like I'm giving up the family dream to achieve my personal dream. I would drop everything in a heartbeat, if I knew for a fact that I could get pregnant again and carry it to term. But bodies are fickle friends.

This past summer, I was supposed to compete. I was signed up to compete in a pretty major, nationally-recognized competition, and I was stoked. And when I found out I was pregnant, I gave up my spot (and the 100-something dollar entry fee).

And then we lost the baby.

No baby, no competition. I had nothing to show for any of it.

I felt so, so empty. I was no longer pregnant, and thanks to the pregnancy and the D&C, I couldn't train to deal with my emotions either, and I lost a lot of the gains I had made earlier this year. I felt like I had lost TWO important things in one tragic moment.

I don't know what it says that I can more easily trust my body to lift over 400 pounds than to carry a baby to full term, but *shrug* I guess that's just how it goes. The first loss, we could accept as really terrible luck. The second? Well, now I'm starting to feel like it's ME. I feel like _I_ can't rely on myself to "get the job done."

And I know this feeling of not trusting my body, because I've been through it before. After I hurt my knee five (?) years ago, I did keep trying to go back to roller derby, but any fall I took (and in derby, you take MANY) rendered me useless. I couldn't trust my body to keep me safe anymore.

So, now I don't know if I can trust my body to stay pregnant, if I can even still get pregnant in the first place. I have one ovary, and I am 36 years old, and I know it's not impossible, but there's a certain heartbreak that comes with the arrival of one's period every month, when you are hoping against hope for it not to arrive. (So for those of you who are like, "Why don't you continue trying after Nationals is over?", that's why. Because every month of not succeeding chips away at you, little by little.)

Maybe it's selfish after all, but I want a break from that kind of pain. Really, I never want to experience that kind of hope and then anguish that comes with pregnancy loss ever again. I don't trust that my heart can put itself back together after a third time. I don't want to give myself a chance to find out.

So for now, I'm taking solace in iron. This is the one thing I know I CAN do. This is the basket where I will put my eggs. (My metaphorical eggs, not my, uh, actual ones.) Maybe if I focus on this for a while, over time I can learn to fully trust my body again. Maybe I will have another child someday, maybe I won't, but at least if I shift my feelings of yearning towards something I have more control over (my numbers), then maybe I can learn to forgive my body a little in the process. And then we can mend, and then we can play.