The birth of our son Benny, and an ode to pregnancy

July 04, 2020
I was going to write a long, exhaustive recap of the birth of our new son. I was going to go in-depth into the year that is 2020, and how different things are now compared to 2009, when Jolie was born, and how each child's birth was just about as different as can be from each other, though, if you've known me a while, I think you already know the basic facts: Jolie was a surprise at 33 weeks, and Benny was induced just this past Monday at 39 weeks. We had Jolie at 26, and it was the beginning of Obama's first term, and it was this general time of hope, whereas now? Well, 2020 has definitely been a year for the history books.
Anyway, I was going to write about all of that (I even have a Google Doc draft going), but in truth? I'm kind of exhausted. I will go ahead and paste my short Facebook version of Benny's actual birth day at the end of this post, but right now, I want to talk about something else: pregnancy.
It's no secret that I don't enjoy being pregnant. I love being a mom, and I love the result of pregnancy (a sweet new baby joining the family), but I hate actually being pregnant: the anxiety, the having-to-give-up-my-body, the weakness, the heartburn, the gestational diabetes, the physical discomfort, all of that. I know some women love it and thrive, but for someone like me who has already spent most of her life feeling like her body is cumbersome and who finally figured out how to accept her body and "work with" it, being pregnant added more struggle.
However... I just did my laundry today. And in this load of laundry were clothes I had been wearing in the last few days of my pregnancy, and as I folded them/hung them up in my closet (because no one goes immediately back to their pre-pregnancy body, NO ONE), I suddenly felt a little sad and nostalgic that that period of my life is now over, most likely for the last time (because I'm like 99.9% positive that I do NOT want to have any more kids, so this is it).
They say it takes 21 days to build new habits and change your life; pregnancy lasts considerably longer than that. Over the course of 39 weeks, I've had to change how I sleep, how I eat, how I dress, and even how I walk (in the last month, when I was super large). That's a LOT of things to change, for quite a long time, and even though I wanted it to be over, even though I was SO ready for it to be over, and we were induced, so I knew pretty much WHEN it would be over as well... it still felt so fast. I had spent nine months living my life a certain way, and now, all of a sudden, I'm... no longer doing that.
I mean, granted, no one says I have to stop sleeping on my left side or that I have to stop eating healthy or even taking vitamins, but it's a sudden shift in mindset. I peeled off this old skin, discarded it, and now I'm in a new body, a new life, without so much as a goodbye to my old self that I'd been living with for nine months. And while I don't MISS being pregnant, and I don't want to be pregnant again, I also want to give pregnancy its due. I don't want to just drive away and watch it disappear in the rearview mirror; I want to shake its hand, give it a hug, and pat it on the shoulder as we say our goodbyes to each other.
Thank you for giving me yet another love of my life, pregnancy. I will never forget you. I look into his eyes, and I know it was all worth it. Thank you for giving me this one last chance to do it all over again, to the fullest extent I could, since I didn't get the whole experience the first time (and definitely not the second and third). Thank you so much... and goodbye. 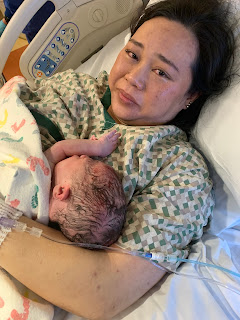 And as promised, here's the short rendering of my birth story, as I shared on my personal Facebook:

- 8am appointment. First thing they did was give me the COVID-19 nose swab (ugh), and once I got the negative result, I was able to remain maskless in my private rooms. Jimmy had to wear the mask as long as there were other people around, but once it was just us in our rooms, he could take the mask off.

- I was 2cm, 90% when I came in, so they put me on pitocin around 8:30 and the nurse midwife stripped my membranes, which is every bit as uncomfortable as it sounds.

- By 12:30, I was really close to 100% and a "stretchy 4cm," so they broke my water using an amni-hook, which basically is like, a really long crochet hook. The NM predicted that we would maybe be delivering by about 4:30pm, which was totally fine by me. After my OB told me that sometimes, induced labor can take 48 hours in some women, I was like, Hellllll no, I do NOT want to wake up pregnant on Tuesday morning.

- I did not get an epidural, because I didn't want one. Short version is: I was worried about the side effects, and I didn't want to feel ill for Benny's first few hours/days of life. The staff was like, ASTONISHED. They kept bringing it up with other staff that came in.

- If you don't know, once your water breaks, things start getting intense pretty quickly, so I'm actually really glad that this didn't happen spontaneously at home. The nurse told me afterwards that I only pushed for a total of ten minutes, but of course, it always feels like more. Benny was born at 2:09pm, so, an hour and a half after they broke my water. He weighed about 6lbs, 6oz, and he's 19 inches long.

- We stayed for a full day after that. Benny had some initial trouble with getting his blood sugar up (which they monitor because I had GD), but with some formula supplementation, things ended up being fine. He passed all his other newborn tests easily.

It's been a rough first day and a half, in terms of finding our rhythm and getting used to having a newborn again (OMG I hurt everywhere and have barely slept), but he is just the cutest, sweetest thing, and we're all so in love with him.

His full name is Benedict James Fuqua, but of course, you can call him Benny.